A couple of weeks ago, Jll sent me the schedule for the kids’ extracurricular activities for the fall. As you might imagine with four kids, it would have been easier to read War and Peace. Soccer. Softball. Cross Country. Church activities. School trips. I would need hired help just to keep it all straight.

But one activity in particular caught my eye. Alastair was participating in an Iron Chef competition for Boy Scouts.

It was held outdoors, so the cooking apparatus was a camp stove. I would like to see the real Iron Chefs prepare a meal on a camp stove. The boys worked in teams. They were given a $20 budget, and two secret ingredients. They had to prepare a main course, a side dish and a dessert. When the leaders said go! two boys from each team ran to the grocery store. And when I say ran, I literally mean they ran on their two legs to the Safeway about a quarter mile away. I would like to see Bobby Flay running to the grocery store.

The secret ingredients? Cantaloupe and waffle cones. Alastair confided in us that their menu was chicken quesadillas, salad with melon, and s’mores inside a waffle cone.

Bill and I were observers, and I would have bet a hundred bucks that Alastair would win. After all, he is known throughout the west and midwest for being the butter carving champion of Iowa.

I started getting nervous when, upon the return of the two running boys, I saw them place four or five whole chicken thighs into a skillet over a measley campstove flame. Hmmmm, I kept thinking. They should have cut up the chicken so that it would cook more quickly.

The boys took turns turning the chicken. And turning the chicken. Though it was getting dark, I could see that the chicken wasn’t cooking quickly. It was all I could do to keep from walking over to them and suggesting they slice the chicken into small pieces. But then Alastair would have gotten a demerit or whatever Boy Scouts get as punishment. Flogged by an Eagle Scout?

As it neared 8 o’clock and it was so dark that they could no longer see their food, Bill and I left, praying that whoever had volunteered to be judge wouldn’t die of salmonella. The next day I texted Jll to find out if Alastair’s team won.

Here is her text back to me: Inedible. Dave says the chicken was raw and they were not allowed to eat it. Third place out of 3. But they liked the dessert.

Don’t give up your plastic butter carving knife, Alastair.

Webelos
Tuesday night at 7:30, our doorbell rang. These days it’s starting to get dark at 7:30, so I couldn’t imagine who would be visiting us. I cautiously looked out my peephole because I fully intended not to answer the door – or at least make sure that Bill was standing next to me if I did – unless I knew who it was. Standing on my front porch was the cutest Cub Scout you’ve ever seen, minus his Cub Scout uniform. It was Alastair. And it was that time of year. Boy Scout Popcorn time. Forty bucks for three bags of popcorn. But did I mention it was Alastair? Could you have said no to this face?……..

I might owe a few of you apologies for yesterday’s blog, in which I led with a paragraph about breaking up. I quickly went on to say that it was my hair stylist with whom I was ending a relationship. However, after I posted it on Facebook, I noticed that it was really misleading. You see, FB doesn’t let you choose which photo it posts. So all my Facebook friends initially saw was a photo of Bill and the first paragraph about breaking up. I got more hits on my blog from Facebook than I think I ever have. Apparently people thought my marriage was ending. My apologies, and please know that in the unlikely event that my marriage should end, you will never, ever find out on Facebook. Especially not with a picture of a smiling Bill holding a delicious sandwich. I would definitely edit the sandwich out.

For It’s One, Two, Three Strikes You’re Out
Yesterday evening, Bill was invited to join Dave and two of his kids – Dagny and Alastair – at the Rockies game. Neither Bill nor I are particularly baseball fans, though we do enjoy the spring training games in Mesa during the month of March. But MAN, it’s not every day you get a chance to enjoy a game on a lovely late summer night with your son and grandkids. So he was excited to say yes.  Dagny was even tossed a practice ball…

Rolled Up
In two simple photos, I can show you one of the immense differences between neat and tidy Bill and his wife, Pigpen Kris. I will simply show you how we roll up the hose in the backyard. Here’s the hose when Bill rolls it up….

Here’s the hose when I roll it up….

School Bell’s Ringing
And the last of my grandkids’ back-to-school photos, with Micah starting preschool…. 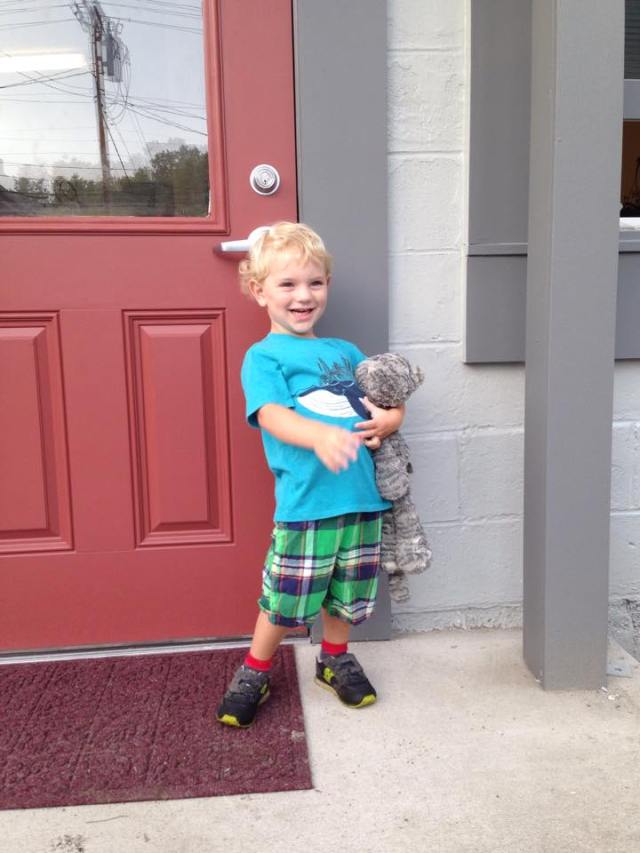 Hurricane Season
Court and Alyx are refinancing their home. Because of this, they are required to get a new appraisal. As you would expect, they are hoping for a good number, so they have both been frantically getting their house ready for the inspection. I got a text message from Alyx yesterday afternoon asking if I could possibly pick up the girls from school so that she could keep cleaning, pointing out that it was somewhat difficult to get a lot done with Cole as her helper. As proof, she sent me this photo….. 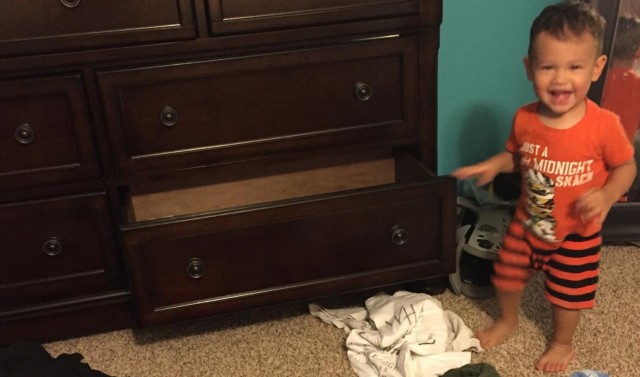 Seriously, have you ever seen a child look more mischievous? That is a boy who loves his work.