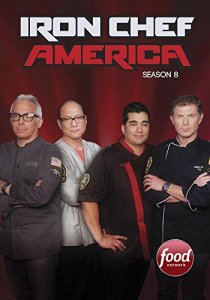 A couple of weeks ago, Jll sent me the schedule for the kids’ extracurricular activities for the fall. As you might imagine with four kids, it would have been easier to read War and Peace. Soccer. Softball. Cross Country. Church activities. School trips. I would need hired help just to keep it all straight.

But one activity in particular caught my eye. Alastair was participating in an Iron Chef competition for Boy Scouts.

It was held outdoors, so the cooking apparatus was a camp stove. I would like to see the real Iron Chefs prepare a meal on a camp stove. The boys worked in teams. They were given a $20 budget, and two secret ingredients. They had to prepare a main course, a side dish and a dessert. When the leaders said go! two boys from each team ran to the grocery store. And when I say ran, I literally mean they ran on their two legs to the Safeway about a quarter mile away. I would like to see Bobby Flay running to the grocery store.

The secret ingredients? Cantaloupe and waffle cones. Alastair confided in us that their menu was chicken quesadillas, salad with melon, and s’mores inside a waffle cone.

Bill and I were observers, and I would have bet a hundred bucks that Alastair would win. After all, he is known throughout the west and midwest for being the butter carving champion of Iowa.

I started getting nervous when, upon the return of the two running boys, I saw them place four or five whole chicken thighs into a skillet over a measley campstove flame. Hmmmm, I kept thinking. They should have cut up the chicken so that it would cook more quickly.

The boys took turns turning the chicken. And turning the chicken. Though it was getting dark, I could see that the chicken wasn’t cooking quickly. It was all I could do to keep from walking over to them and suggesting they slice the chicken into small pieces. But then Alastair would have gotten a demerit or whatever Boy Scouts get as punishment. Flogged by an Eagle Scout?

As it neared 8 o’clock and it was so dark that they could no longer see their food, Bill and I left, praying that whoever had volunteered to be judge wouldn’t die of salmonella. The next day I texted Jll to find out if Alastair’s team won.

Here is her text back to me: Inedible. Dave says the chicken was raw and they were not allowed to eat it. Third place out of 3. But they liked the dessert.

Don’t give up your plastic butter carving knife, Alastair.

One thought on “Saturday Smile: Let the Battle Begin”