The first time you visit San Francisco, here are the things you must do: drive across the Golden Gate Bridge, take a gander at the sea lions on Pier 39, tour Alcatraz, hop on a cable car and hang off the sides, walk through Chinatown and look at the ducks hanging in the shop windows, eat seafood on Fisherman’s Wharf, drive or walk down crazy Lombard Street, drive through the intersection of Haight and Ashbury (preferably while singing Age of Aquarius), and eat an ice cream treat (most likely an enormous hot fudge sundae) at Ghiardelli Square.

By time you’ve done all of those things, you will recognize that it’s just about time to go home.

The first time I ever visited San Francisco was in 1991, when I went with Bill, who at that time was my husband-to-be. I know this to be true because during the fairly recent Cleaning-Out-of-the-Bookshelves in our bedroom, one of the things I came across was a little photo album. I blew off the dust and read my hand written label: San Francisco 1991. I’ve been back several times since.

Dave and Jll not only honeymooned in San Francisco, but have visited the City by the Bay since. So, they have also done all of the above-mentioned must-does. However, none of their four kids had ever been to San Francisco, and they – just like Karl Malden and Michael Douglas – were ready to hit the Streets of San Francisco.

We ran into our first glitch when Jll (thinking, as did I, that tickets to Alcatraz were readily available), realized that the tickets were sold out until the next millennium (well, practically). Oh no! she texted me. Is there anything we can do? I put Bill on the case. He’s as good a detective as Michael Douglas any day of the week, at least when it comes to finding tickets or reasonably-priced hotel rooms. What he learned was that tickets were indeed sold out. However, if one is desperate enough to get up with the birds and be at the Alcatraz boat dock by 6:30 a.m., some lucky people might get tickets. We did just that, and though I felt our chances of getting tickets for eight people to be slim (being the glass half empty sort of gal), we did indeed get tickets for the 8:45 a.m. tour. The tour was well worth the inconvenience…..

We had checked off the sea lions at Pier 39 (the majority of which were not making their appearance because they were off breeding) and eating seafood at Fisherman’s Wharf the first day. I know this will surprise many, but Bill’s top priority was not the Golden Gate Bridge nor cable cars nor Chinatown; it was Ghiardelli Square. Well, not the square so much but the ice cream treats the square offered.

Because of this, following our visit to the indisposed sea lions, our next stop was Ghiardelli Square, with a quick stop-over to Boudin Bakery — the home of sourdough bread…. 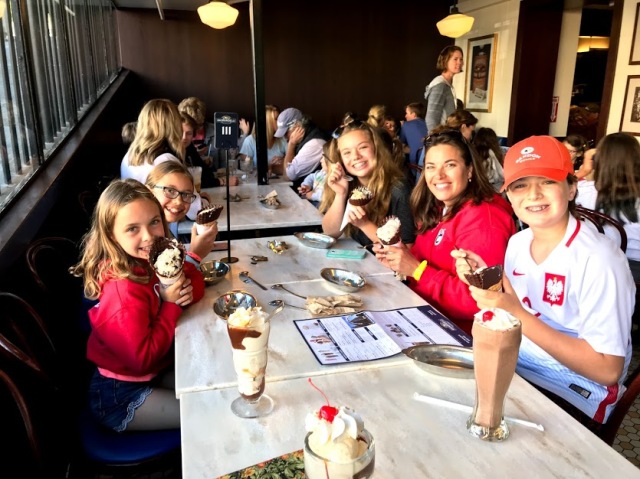 This photo was actually taken at our SECOND trip to the Mecca of Ice Cream Treats. But who’s counting? After all, it was a different day.

We were all interested in riding a cable car, but we were put off by the long lines. Dave discovered that if one was simply wanting to ride a cable car for the experience instead of to get to Fisherman’s Wharf, the best idea would be to take the less popular California line. That had our names on it, so one day we rode a cable car up and back, with everyone taking turns hanging off….. 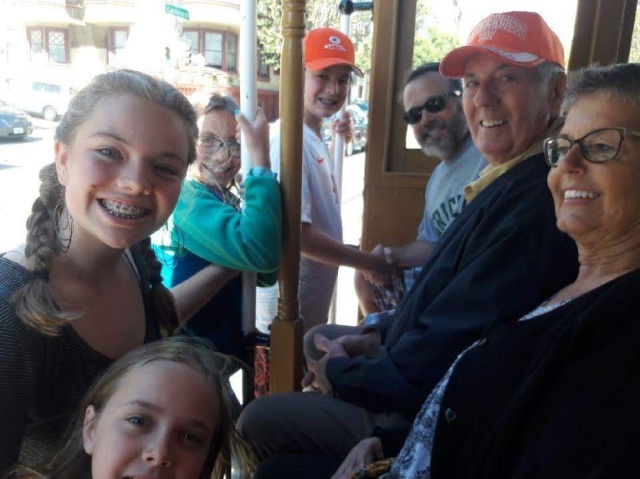 Lombard Street and Haight-Ashbury were knocked off in a couple of driving trips, along with some lessons about switchbacks and the history of Flower Power. And I did, indeed, sing The Age of Aquarius, which admittedly caused some surprised faces among the grands. Was Nana a hippie? The answer: a most decided NO.

I documented some of our trip to Chinatown in my last Saturday Smile. In addition to our lunch at House of Nanking, we also visited a fortune cookie factory….. 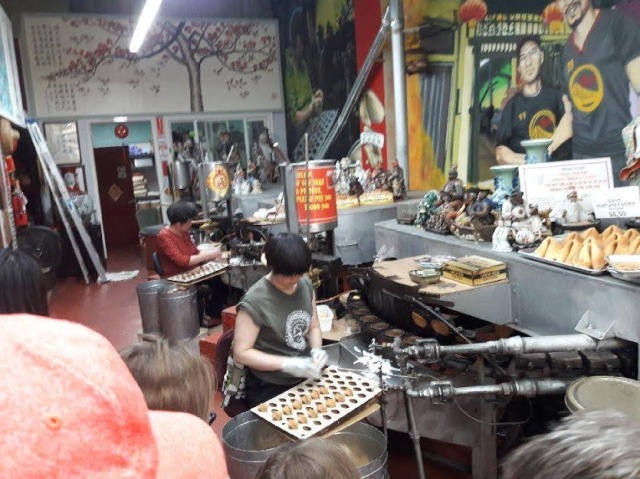 …..where the woman’s job was to take one of the soft, flat disks that were coming down the line, lay a fortune on top, and fold it and crimp it and place it into the special cooling pan, then move on to the next one. Catholics would call her job Purgatory. Or perhaps Hell.

That same afternoon, we took a bathroom break at a restaurant called Sushi Boat. The boats carried plates of sushi; they would float by, and if you were interested, you would grab the plate from the boat. The color of the plate told you the price. Alastair would have stayed there all afternoon had I given him a couple of hundred dollar bills to pay for all of the little plates he would collect…..

We checked off our drive over the Golden Gate Bridge with a trip to Muir Woods, on the other side of Sausalito. It was a beautiful morning…..

Our days always concluded with whale watching and enjoying the beautiful sunsets over the Pacific Ocean…..

Alastair, Dagny, and Maggie Faith watch the waves gobble up their footprints at sunset one night.

6 thoughts on “I Left My Heart”