When Bill and I were on our Big European Vacation in 2008, we stumbled upon a circus in Honfleur, France. Knowing full well that we wouldn’t understand a word that was being said, we both agreed we wouldn’t miss that little family-owned circus in a unique French village for anything in the world. It remains one of our favorite memories of that trip.

While any traveler doesn’t want to miss the highlights of a destination, many times some of the things upon which you stumble might give you the most pleasure and the strongest memories. So while we all enjoyed the predictable things we saw during our recent visit to San Francisco — and wouldn’t miss them for the world — there were a few unexpected pleasures upon which we stumbled.

For example, as we made our way the first day from Pier 39 to our final destination of Ghiardelli Square, we noticed we were passing an interesting arcade called Musee Mercanique. The games in this arcade were all vintage. It was fun to see the kids playing with some of the old-school arcade games more familiar to their Papa Bill than to them. For a mere quarter or less, you could play with a puppet or listen to a music box. You could have your fortune read by a scary-looking porcelain head….

…or arm wrestle an even scarier-looking porcelain arm…..

We spent a good bit of time in that old arcade museum, and Papa spent plenty of quarters to watch the kids go back in time.

One day when we were all getting fairly thirsty (did I mention that we had unusually pleasant — even warm — weather, something for which we were all grateful), we stopped at a little cafe that turned out to be more than just a cafe. The Gallery Cafe instructs its customers to PUT DOWN YOUR TECHNOLOGY and talk to each other and to have some fun. There are old-school games…..

…..and many opportunities to be creative, something at which the McLain kids excel….. 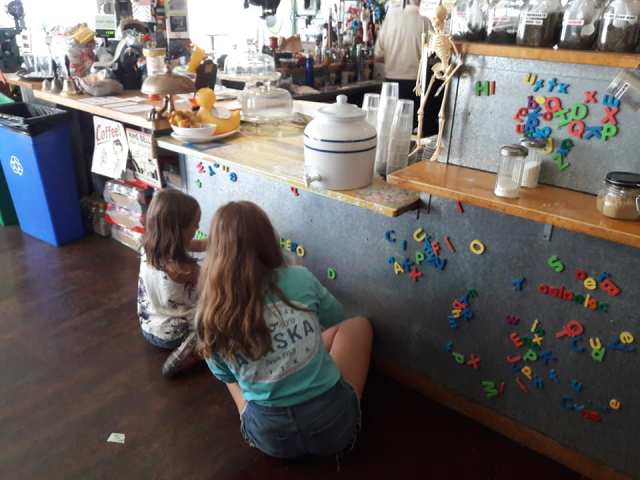 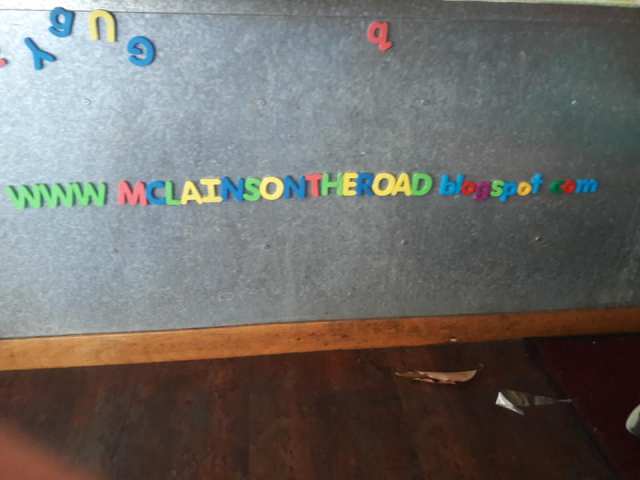 While visiting Chinatown, in addition to Addie getting a SMOKIN’ deal on some earrings…..

…..we also visited some Asian markets. We saw many different fruits and vegetables with which we were unfamiliar. The proprietors spoke Chinese and the signage was also in Chinese. I was particularly struck by this beautiful fruit…..

Not having the remotest idea of what it was, I texted my daughter-in-law Alyx and asked if she knew what it was. Dragonfruit was her immediate response. Inside fruit is like a white kiwi, she added. Who knew?

Our hotel overlooked the ocean, and every night we would see men fishing from the shore. I’m not sure just what they were hoping to catch, nor did I ever find out if they were fishing for fun or were professional anglers. But they were a pretty sight as the sun would go down…..

The wind, salt water, and sea spray gave me a laugh when I saw just how relaxed our granddaughter Addie — who always takes great care to look perfect — was after a few days on the beach. Can you say Crazy Hair?….

By the way, I likely won’t ever be forgiven for posting this photo!

When we visited Muir Woods, one of the most interesting and typically-Californian things I noticed was this sign…..

And finally, that same day as we were driving home from Muir Woods — July 11 — Jll suddenly made a screeching turn into a 7-11 store parking lot. Why? She remembered that it was July 11 — 7-11 — and they were giving away free icees. What can I say? More vacation fun….. 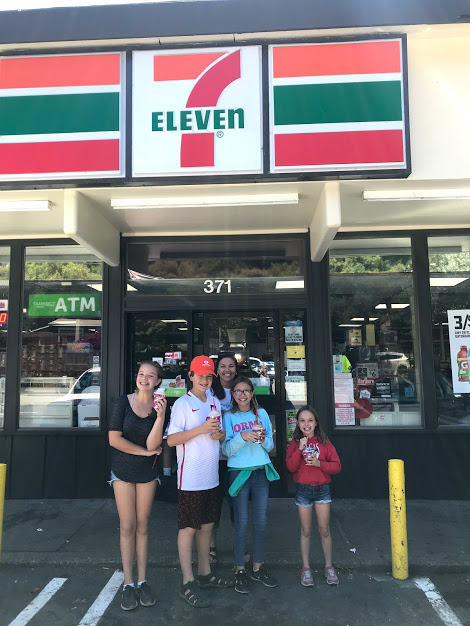 While I’ve visited San Francisco on a number of occasions, this is one I will certainly never forget.

One thought on “Hidden Fun”