The morning that Bill and I departed on the California Zephyr heading west to San Francisco, the train pulled into Union Station at exactly 8:05, as scheduled. We were promptly shown to our sleeping room – a spacious berth with room for our luggage, plenty of space in which to move around, and, of course, an ensuite toilette. We made our way to the dining car, where Hercule Poirot sat with a silver coffee service on his table. He nodded coolly to us as we passed, on our way to our table for two, covered in a white tablecloth and furnished with china plates and crystal glassware. We dined on Eggs Benedict and poured coffee from our own silver coffee service.

Of course, none of the above is true. But then we didn’t expect anything beyond what we got – and enjoyed our experience immensely.

It didn’t help that the evening before our early morning departure, as I bent down to wash my face, my back – which had given me trouble the week before but had seemingly settled down – gave a silent TWANG, and sent me down for the count. I wish I could say that my back went out as I lifted 20 lb. weights, one in each hand. But no; it simply took umbrage at my leaning over the sink. I hobbled to bed, hoping for the best.

Around midnight, I got out of bed, and, in great anguish, made my way to the bathroom. I knew I was in trouble when I was unable to stand up following my toilette. Bill awakened upon hearing groaning that sounded like childbirth.

As he helped me back to bed, I thought to myself, there is no way I’m going to be able to even get out of bed tomorrow morning, much less board a train upon which I will ride for 33 hours. So I did what any God-fearing potential traveler who is in pain would do: I began praying fervently for a miracle and took a Percocet.

The next morning, the miracle happened. While I was still very sore, I was able to be ambulatory enough to hobble to Union Station…… 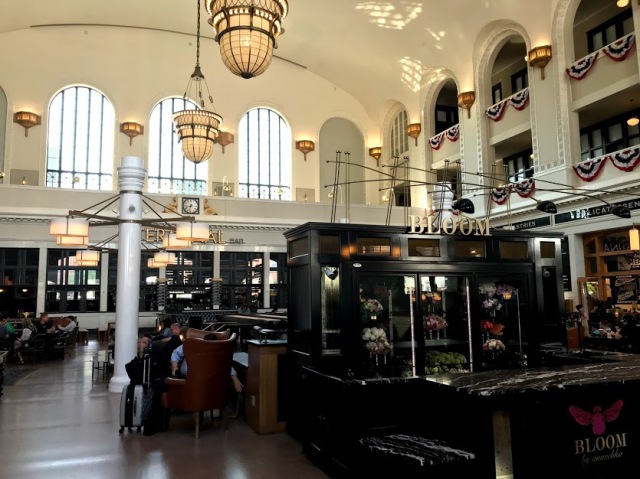 Bill had been keeping track of our train since it left Chicago, and knew that it was running two hours late. We boarded the California Zephyr at 10:30 a.m.

Our steward introduced himself as Alfredo (as in the fettucine) and showed us to our sleeping car. It was small – large enough for two chairs facing one another with a small pull-down table in between. That was it. Even our luggage had to be placed elsewhere. Nevertheless, I loved it immediately. It was private and we could move around enough to avoid getting blood clots. Best of all, we were steps away from both the bathroom and the dining car. I’m pretty sure the difference between riding a train as a simple passenger and riding a train as a sleeping car passenger is as different as day and night. Despite the smallness of the berth, having a steward makes all the difference in the world…… 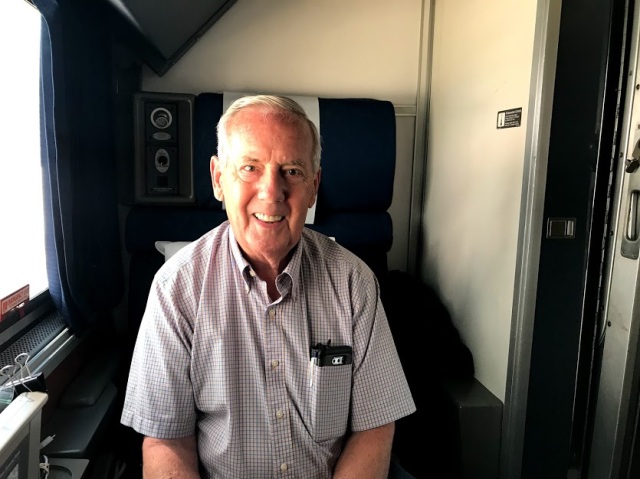 For the next 33 hours, we clickity-clacked along the tracks with scarcely a problem. Well, there was the small matter of the car that pulled out in front of the train somewhere in Nevada, requiring the train to come to a screeching halt and delaying us while they checked the train for damage and emptied the conductor’s shorts.

At night, you summon the steward to prepare your room. What this means is that Alfredo came in and pulled down the two chairs that made into a bed that is reasonably comfortable, but narrower than a twin bed. He also pulled down the bunk that rests from the ceiling to provide sleeping space for the second passenger. As long as the second passenger is a chimpanzee. Because, you see, there is no ladder provided to the passenger who drew the short straw and is supposed to sleep in this bunk that is – quite literally – no further from the ceiling than three feet with no window to provide relief from imminent claustrophobia.

Nevertheless, I tried. I managed to get into the bunk, and Bill crawled into the bed below. I laid there for a couple of hours, wide awake, concerned that I would (a) slide onto the floor as the train made a quick turn; (b) hyperventilate from claustrophobia that I never would have known I have had I not been stuffed into a bunk bed with three feet of head room; or (c) never be able to get out of the bed given the fact that – as you might recall – I threw my back out 24 hours previously.

C turned out to be the most realistic fear. Around 2 a.m., I could no longer deny the fact that I had to go to the bathroom. Bill, I whispered, to no avail. Bill, I said out loud, again to no avail. Bill, I nearly yelled, and he awoke. I explained my situation, and for the next 20 minutes, we worked on me successfully getting out of the bunk. The bunk to which I never returned. We spent the next couple of hours scrunched together in the narrow bed, and arose long before the crack of dawn to take a shower (which was obviously deserted) and await the breakfast bell.

The food? It was fine. Hercule Poirot would have been discontented, but we managed to find something to eat at each meal. Well, until our final meal, which was lunch that next day. As we all optimistically looked at our menus, the server came in and said, “Put down the menus because they’re useless. We have exactly four things available at this point – a hamburger, the hot dog and the mac and cheese from the kids menu, and the black bean burger. We’re out of everything else.”

I can’t explain how this happens, but apparently running out of food is commonplace on trains. Had our train been running hours and hours late (as is also commonplace), we would have had no food. The word on the street (or on the train, as it were) is that Amtrak has a stash of Dinty Moore beef stew that they hand out in these situations. Thank the good Lord, I can neither confirm nor deny.

All-in-all, we enjoyed our experience. The question everyone asks is would we do it again. The answer is a most emphatic YES, but no time soon. Like childbirth, you need a bit of time to forget.

3 thoughts on “I Hear the Train A-Comin’”