I had a work acquaintance years back who annoyed the living daylights out of me. She started every day with a three-mile run, worked long days and yet made fabulous meals from scratch every evening for her perfect husband (who had left his lucrative job as an attorney to teach high school English because “there are things more important than making lots of money”) and her two perfect children. She would bore us with her endless stories of quilting and knitting and making her children’s clothes, taking a break only to spatchcock a chicken and harvest her home grown organic garden. Puke.

The straw that broke the camel’s back was one day when she came to work and announced that she had made s’mores for her family’s dessert the night before. “Wow, I’m sure they enjoyed that,” I said, thinking to myself that she probably built a campfire using sticks and a magnifying glass. But the reality was even worse. The s’mores were made using graham crackers and marshmallows she had made from scratch. Who does that? Marshmallows are a buck a bag at King Soopers. And if God had meant us to make our own graham crackers, he wouldn’t have invented Nabisco.

I thought about those made-from-scratch s’mores yesterday when I gave a glance at my National Holiday Calendar to see what delicious sweet treat was being honored that day. You guessed it: August 10 is National S’Mores Day. A day honoring that snack that millions of children the world over (well, maybe not France; they eat petit fours) have made by roasting a couple of marshmallows over a open fire and sticking them between two graham crackers along with a piece of Hershey’s chocolate. I wonder how much Hershey and Nabisco had to pay to make a designated day happen.

I’m not particularly a fan of s’mores. I like the act of making them — not myself, but watching my grandkids carefully build perfect layers of gooey and chocolaty goodness. The reality is that I’m not particularly a marshmallow lover, unless they are in Rice Krispie treats. Then, the gooier, the better.

There are several schools of thought when it comes to roasting a marshmallow over the grill or campfire. While I never ate a s’more until I was an adult, my siblings and I did roast marshmallows over the hot coals of the grill once Dad was finished cooking our steaks or pork chops. I favored then — and still do today — cooking a large marshmallow until it’s a golden brown, turning it constantly so that it caramelizes but doesn’t burn. Hot outside, still cool, yet gooey, on the inside.

It wasn’t until I met Bill and we had our first foray into the act of s’more making that I saw what I considered then — and still do today — a travesty of the first order. He puts the marshmallow on the stick, places it into the burning flame, and when it starts on fire, he pulls it out and blows out the flame. What’s left is a black, charred marshmallow. “Perfect,” he’ll say.

But at least he doesn’t make them from scratch.

Here is the proper method of EATING a s’more….. 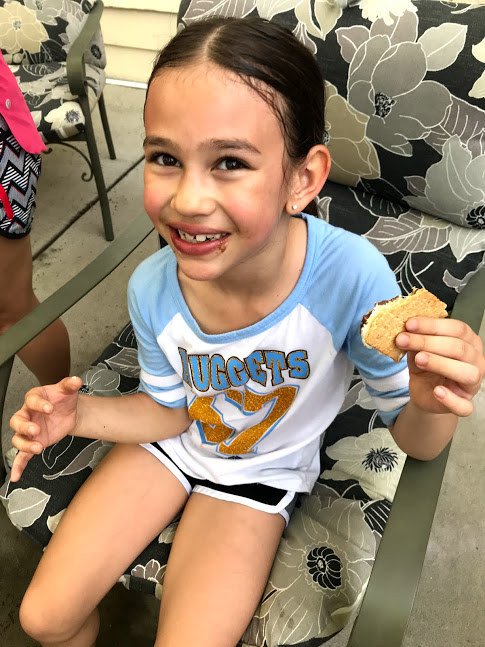 If there is no marshmallow and/or chocolate on your lips, you’re doing it wrong.