If you had told me two years ago that there would be a day when I would be sitting in a hair stylist’s chair wearing a face mask while my hair was being cut by a young woman also wearing a face mask, well, I would have told you that you were nuts. That would never happen in these United States of America. America Strong. America First. America the Beautiful. Never happen.

But that’s just what I did yesterday afternoon. On the salon’s orders, I pulled up to the building, dialed their number, and told them I had arrived. Someone came out of the building wearing a mask. She pumped some disinfectant into my hand. She then  had me sign a waver promising on the life of my eldest grandchild that I wouldn’t sue them should the coronavirus find me behind that mask. She then took my temperature. I passed with flying colors. I entered the salon, where I was greeted with a multitude of signs forbidding me from touching anything and a smile from the receptionist. Well, I reckon she was smiling. I couldn’t tell because she, too, was wearing a mask. I was smiling too, but she didn’t know that either.

I’m not complaining. Frankly, I was glad that the salon was so careful. I awoke yesterday morning with a lump of dread in my stomach. Was I being ridiculous thinking I needed to take a risk by getting a haircut? I texted my son, who had gotten his hair cut over the weekend, along with my grandson Cole.  I asked him: Did you feel safe when you got your hair cut this weekend? He assured me that the salon would take precautions and that I would be fine. I took him at his word because he has been extra cautious since All Of This began. And so….. 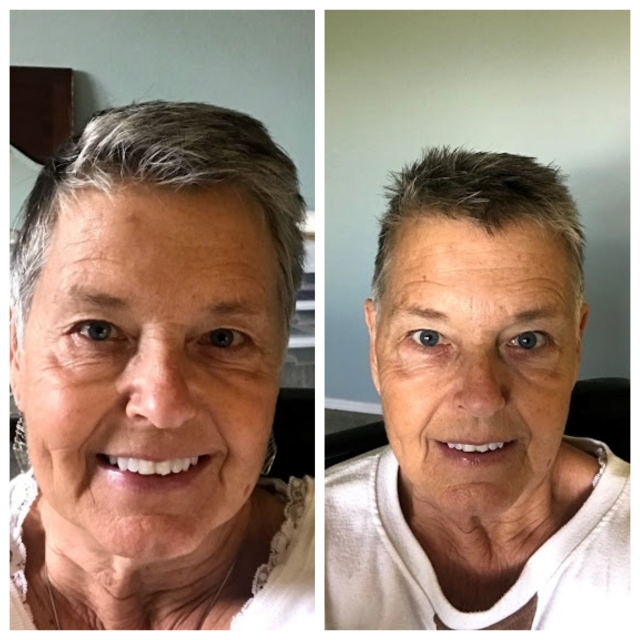 That should last me a while.

I also wore my mask as I grocery shopped yesterday morning. I did a big shop so that I wouldn’t have to go again for at least a week. That meant I was in the store for a fair while. When I left the store, I ripped off my mask as though I hadn’t had fresh air for a month. I hate that thing. As everyone else who wears glasses, I am unable to see within seconds of putting on the mask because the glasses fog. I handle this by not wearing glasses in the store, and hoping for the best. I hope any friends or neighbors that I ignore while grocery shopping forgive my rudeness.

Monday afternoon, I realized that my gin supply was running low. Heaven forbid. I can barely handle the quarantine, but I certainly couldn’t handle it without gin. I planned on a trip to Total Wine and Liquors yesterday afternoon. But when I awoke with that dreaded lump in my stomach yesterday morning about my haircut, I decided to forgo a trip to the liquor store and have them deliver my supply instead. I got on their website and placed my order. They promised a delivery between 9 and 11 a.m. yesterday morning.

As I awaited their delivery, I hoped with all my heart that the delivery van would be something unassuming that might look like a plumber. My neighbors aren’t teetotalers, but the box would be rather, well, large, I’m afraid. I was also out of wine, you see. However, when the van pulled up, it was not only not unassuming, it was the brightest shade of teal you can imagine, with LARGE letters on the side proudly saying TOTAL WINE AND LIQUOR. My only hope was that most of the neighbors were still sleeping at 9:30 when it was delivered. There’s that Next Door Judgemental Crowd, after all.

By the way, in yesterday’s blog post I mentioned my regular hairstylist had left the salon. I asked my new hairstylist where she went. She apparently became a dog groomer. I don’t know how I feel about that. Perhaps she felt it was safer dealing with miniature schnauzers than humans. They might bite, but they don’t carry scary viruses.

2 thoughts on “Masked Up”