This weekend, Coloradans opened our doors just a crack, allowing us to loosen up the quarantine reigns a bit. Frankly, nothing changes that much, but I must admit that it does make me feel like I can breathe a little freer. And wouldn’t you know it? I ordered two masks from a shop on Etsy seven or eight weeks ago. It wasn’t until I had waited about a month without receiving the masks that I noticed the shop from which I had purchased the masks was in Bulgaria. Talk about NOT BUYING LOCAL. And just as the governor is allowing us to peek out our doors, the masks arrived. I’m lucky that I have friends who are not necessarily in high places, but know how to sew. At any rate, now Bill and I have two masks each, which we are required still to wear.

There are a couple of changes for which I’m very grateful. The first is that our archdiocese in Denver is allowing churches to be open for people to attend Mass in person. There are very strict guidelines, and it will be literally MONTHS before we will be attending Mass like normal. I probably will hold off for a bit because it is going to be a nuthouse. And frankly, I’m enjoying watching Cardinal Dolan say Mass each Sunday at St. Patrick’s Cathedral in NYC. I will be very happy, however, when I can once again receive communion.

Another thing about which I am rejoicing is that hair salons are finally being given permission to reopen. The day after Bill and I returned to AZ following our quick trip to Denver for Bill’s doctor’s appointment, I went to my hair stylist there and told her to cut my hair ridiculously short. I was pretty sure that a shelter-in-place order was on its way in AZ, as it had been declared in Denver just days before. She clipped it very short in front, and literally used clippers in the back, and promised me no one would mistake me for a man. At the end of the day, who really cared? Bill is pretty sure of my gender at this point, and he was about the only one I saw for the last two months.

So later today, I have an appointment to get my hair cut. My regular stylist is no longer there. So I’m going to someone new, which is always somewhat disconcerting. But how much can anyone ruin a haircut like mine?

I texted my son over the weekend, and asked what he was doing. He and his family have been very cautious during the shelter-in-place order. But he and 6-year-old Cole were venturing out to get a much-needed haircut….. 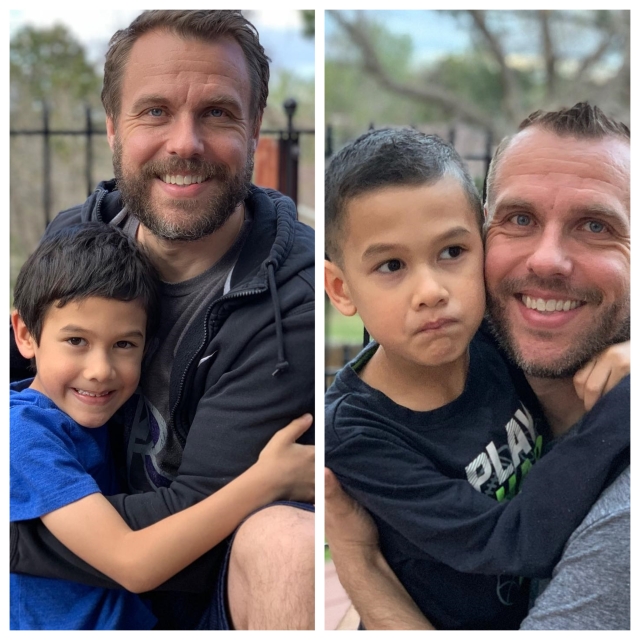 Ah, I can breathe, I’ll bet they both said.

Over the weekend, my brother and most of his family drove from AZ to Denver to visit his daughter (my niece) Jessie. She and her boyfriend moved here a couple of weeks ago, and he was eager to see where she lived and if she was happy. (A nice house in a nice neighborhood, and yes, she is very happy.) I will admit that we gathered on Saturday at our house and Sunday morning at Jess and Rob’s, trying as much as we could to socially distance. We didn’t have our tape measures out, and in our excitement, I’m pretty sure we broke the rules a bit. Fingers crossed.

In fact, fingers crossed about a lot of things. We may survive yet.

One thought on “Putting Our Toes in the Water”