Little Miss Muffet she sat on a tuffet eating her curds and whey.
Along came a spider who sat down beside her
And frightened Miss Muffet away.

Little Miss Muffet she sat on a tuffet eating her curds and whey.
Along came a spider who sat down beside her
And frightened Miss Muffet away. — Peter George Sullivan

I was trying to recall the exact words to one of the nursery rhymes I grew up hearing that mentioned curds and whey. I googled it, and they sent me to a lyric site that indicated the lyrics above. I copied it exactly as it was written. Apparently Mr. Sullivan liked his first verse enough to make that be his second verse as well. I’m pretty sure he didn’t make an album.

Anyhoo, the reason I was looking for the nursery rhyme is because in my utter boredom, I was looking for something to challenge my cooking chops. As I was perusing Pinterest for meal ideas, I came across the Lasagna-for-Two recipe that I pinned some time ago. Lasagna sounded good, but making a giant casserole wouldn’t be prudent. After all, we have plans to leave for Denver sometime in the next week-and-half or so. But this recipe is made in a small bread pan. PERFECT.

Except I didn’t have any ricotta cheese. I couldn’t decide if the Shelter-in-Place police would allow ricotta cheese as an essential item. I would argue that it is indeed essential should you plan on making lasagna. Nevertheless, I remembered pinning some time ago a recipe for homemade ricotta cheese. I also recalled that it was very easy, provided you have the proper ingredients: cream, whole milk, salt, and vinegar.

Anyway, I poured two cups of whole milk, one cup of heavy cream, and a teaspoon of salt into a saucepan. I brought the mixture to a boil, and removed it from the heat. I then dropped in a tablespoon-and-a-half of vinegar to the mixture and let it sit for a couple of minutes. As I watched, the mixture curdled, and the “curds” began separating from the “whey.”

Once that happened, I poured the mixture through a sieve lined with cheesecloth, and let it drip for 25 minutes….. 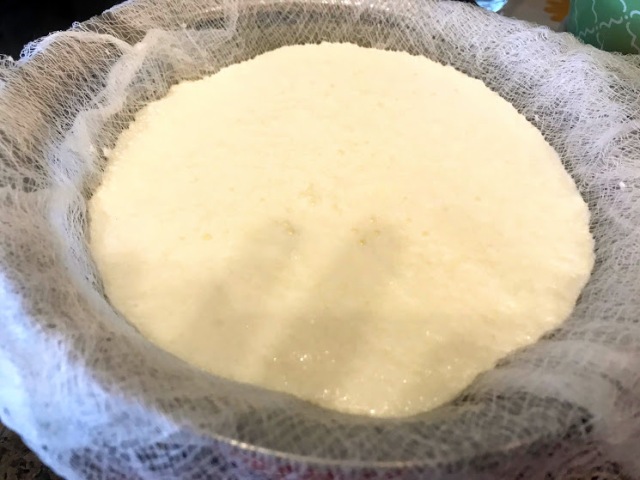 “Oh, just making cheese,” I answered, expecting him to be impressed. He didn’t even look up from his computer.

I used it to make my little lasagna….. 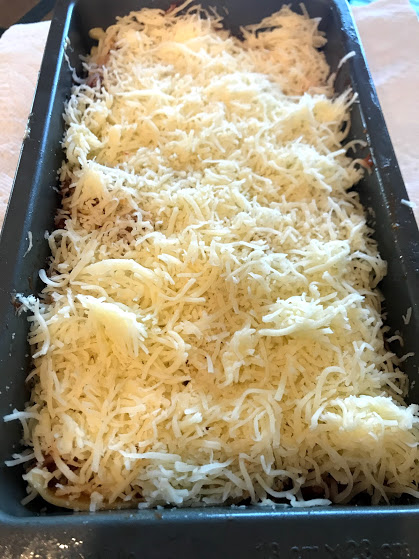 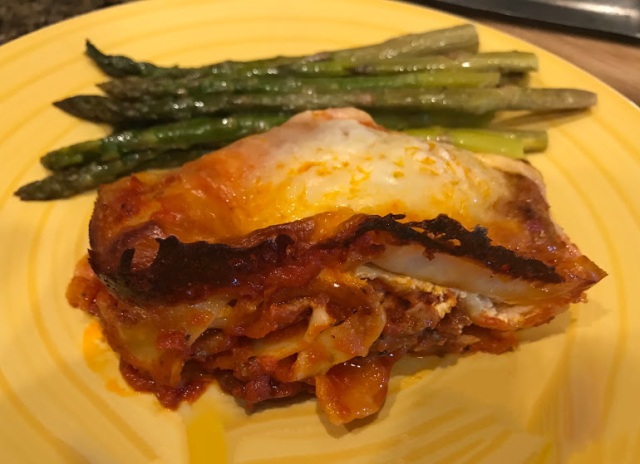 So, just like Miss Muffet, I too ate my curds, though not the whey. Yuck. There were no spiders present, and I didn’t sit on a tuffet because I don’t know what that is.