It may not be true now in 2020, but back in 2008 when Bill and I traveled in Europe — and particularly when we lived in Certaldo, Italy for that month — we noticed that Italians didn’t go to the grocery store once a week and buy their groceries. Instead, they would grab their grocery carts (I called them nonny carts because it seemed most commonly the grandmothers — nonnas — who did the grocery shopping) and make their way each day to do their marketing. Often, rather than go to one market, they would go to the carniceria for their meat, the panaceria for their bread, the mercati for fruits and vegetables. Even if they shopped at the regular market, there wasn’t much meat wrapped up in plastic and sitting in the refrigerated case. I have a vivid memory of going to the carniceria and watching the butcher cut off two giant steaks for us with a meat cleaver — KA-THUNK, KA-THUNK!

Here in the United States, I bet it is typical to shop weekly, and most often our meat is found wrapped in cellophane and sitting in the meat department in cases nestled amidst all of the rest of the meat. Don’t get me wrong. That’s the most efficient way to shop, and it’s how I generally buy my meat.

I was excited, however, when my niece told me that a butcher shop had opened up in a shopping center only about 10 minutes from our AZ house. Sometimes the taste of freshly cut meat from an experienced butcher is worth the price difference. I was excited to visit the shop, and Jen was looking forward to getting out of the house where she had stared at its walls for far too long following her surgery.

Chuck’s Fresh Meats actually opened up in September, right next to Dunkin Donuts. I’m not sure how good a partnership these two businesses make, except that people like donuts and people like meat. They might scratch each others’ backs.

The meat-filled cases reminded me of shopping in Italy. But it also brought back memories of riding my bicycle with a friend as a child in Columbus, and stopping for a break for a pop and a hot dog at the butcher shop on 6th Street, maybe two miles from our house. And understand this: the hot dog wasn’t cooked and placed in a bun. Nope. It was one of a string of cold hot dogs cut off the string by the butcher  that I happily ate wrapped in a napkin as I rode off on my bike. I will tell you this: I could easily do that today (maybe not the riding-my-bike part, but certainly the eating-a-cold-freshly-smoked-hot-dog part).

My sister and I spent some hard-earned dollars on rib eye steaks, ground beef, and chicken thighs and breasts which we will cook this week….. 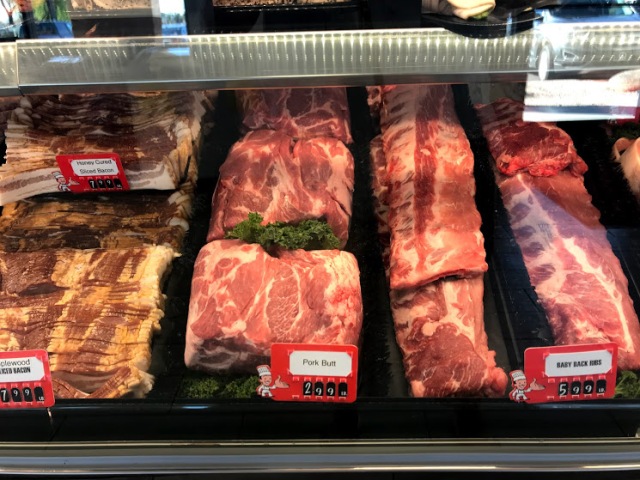 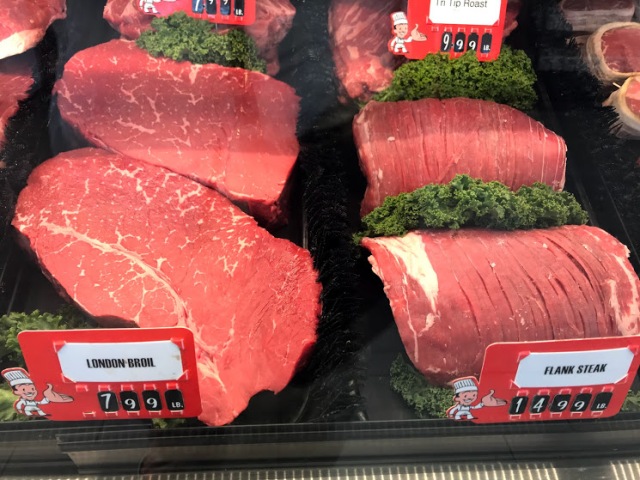 Judging from the steak we ate the other night, it will be a dining delight. Even better than the hot dog.