A number of years ago, Bec brought her grands to Colorado during one of their school spring breaks. Both of the kids were lifelong Arizonans. They had never seen snow.

Don’t get me wrong. Arizona gets snow. Up in the area around Flagstaff, it snows. In fact, there is actually a ski area outside of Flag. Or should I say a “ski area” because, at the risk of sounding like a snob, no Coloradan with any sense would consider it much of a mountain. Even beautiful Superstition Mountain a mere 15 miles east of our AZ home will occasionally get a dusting of snow….. 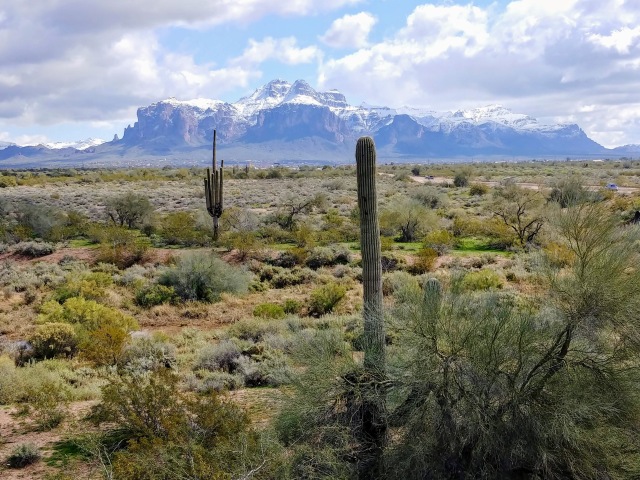 This photo was taken the winter of 2018. I love the contrast between the snow and the cactus.

But those two had never touched snow. And as we drove into Estes Park and then up Trail Ridge Pass, they were getting more and more excited. As we made our way up the narrow road, we passed areas of snow.

“Stop Nana! Stop!” they hollered from the back seat. “There’s snow!”

“Have you seen how narrow this road is?” she asked them. “Do you see how far down we could fall? We can’t pull the car over here. I promise there will be snow at the top of the pass.”

And of course there was. And the two of them happily played in the snow like it was Christmas Day.

As for me, while I was excited for the kids, I could live forever without snow. Even though I will admit it’s pretty as it falls, the fact that it needs to be shoveled and you have to dress in 17 layers of clothing while you shovel and then you will STILL freeze your tush, dampens — no, destroys — any warm and fuzzy feelings I might have. There’s not enough hot chocolate in the world to make me change my mind.

There are probably a lot of kids in the Phoenix metro area who, like Kenzie and Carter, haven’t touched snow. But to address this reality, the neighborhood in which Jen’s daughter Maggie and her family reside brings in snow. Yes, you read that right. The neighborhood association sets up a mountain of snow in the neighborhood’s green belt one weekend a year.

It’s probably not real snow, of course. It takes some sort of weather phenomenon to create snow (and of course the hand of God), but whatever this is — ground up ice crystals perhaps — it looks like snow and it sleds like snow and it makes Arizona kids happy like snow….. 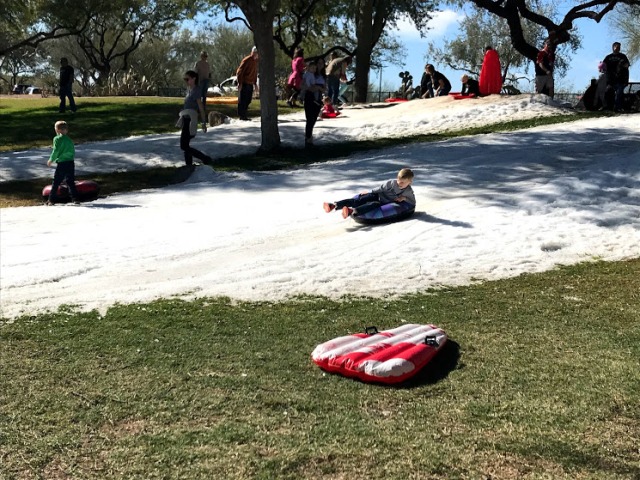 It made my heart happy to see and hear the kids having so much fun on the tubes and sleds they purchased at the nearby Big 5 or Ace Hardware just for that day.

And I must admit that hearing the sounds of kids playing at the pool at the same time also made me smile. You’ve got to love the ingenuity of mankind.

2 thoughts on “Let It Kind of Snow”