I’ve never seen Halloween for example. Any scary movie lover worth their weight has seen Halloween. Halloween is the movie by which they compare all other scary movies, at least of the slasher variety. Never saw it. In fact, I never saw any of the movies where teenagers are being chased by men wearing masks and waving around chainsaws.

Somehow I didn’t pass along the scary movie dislike gene to my son Court. He likes scary movies. He’s seen every movie involving Freddy Krueger, some more than once. He’s seen Halloween 1 through 11. To him, a chainsaw is a murder weapon and not a building tool or something used to cut down a Christmas tree.

Here are the scary movies I’ve seen, or at least that I remember seeing: Play Misty for Me, House on Haunted Hill, Wait Until Dark, Misery, Psycho, Silence of the Lambs, The Shining, The Sixth Sense, Jaws, The Exorcist, and The Birds. Out of those I just listed, the two I would never see again are Wait Until Dark and The Exorcist. I saw both as a teenager. The Exorcist was terrifying, and scared the living hell out of me because DEVIL. Wait Until Dark was not a true horror film since it didn’t involve any kind of supernatural being. But the idea of being unable to see because of blindness and someone trying to kill you is extraordinarily frightening to me. There is a scene in which the bad guy (Alan Arkin) jumps out at the blind woman (Audrey Hepburn) that scared the daylights out of me. I must have jumped a foot in the air. I hated being scared like that, and still do.

My granddaughter Kaiya has inherited her father’s love for scary movies. Being only 11 years old, she is restricted from watching some of the scarier movies, though she would love to see them. She watched The Sixth Sense (a movie that scared the crap out of me) with her dad one day when her mother and Mylee were on a Girl Scout camping trip. Did it scare you, I asked her. Nope, she insisted, not that she would tell me if it had….. 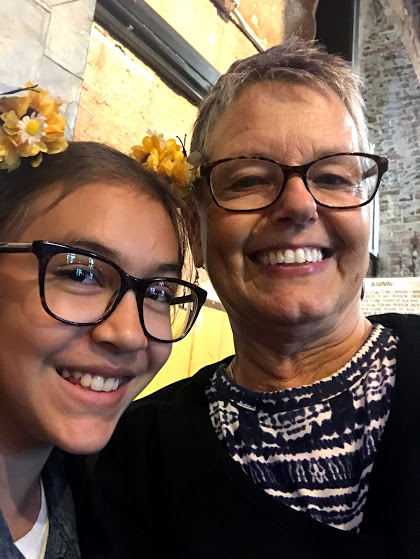 This photo was taken the night Bill and I took her on a ghost tour, something that didn’t scare her a bit.

My 7-year-old grandson Micah also likes scary movies, or at least proclaims to do so. I’m not sure how many he’s seen, being only 7. While visiting there a few months ago, I was there when he was being picked up from school. He got in the car and announced that he wanted to see the movie It. Shockingly, his mom said it was a no-go. But there are no swears, he pointed out……

How could anyone as cute as this like scary movies?

I’m sure there are more horror movies that I have seen that I’m just not remembering. I’m not counting any Alfred Hitchcock movies except for Psycho, because they are more psychological thrillers than horror movies, or at least that’s what I think. I did rewatch The Birds the other day, a movie I haven’t seen for probably 40 years. I will admit that the gathering of the crows on the playground was disconcerting.

By the way, even Kaiya has her limits. “I don’t like scary movies that have dolls,” she told me.

Neither do I. Or devils.