I’m pleased to tell you that our Christmas outside lights now cheerfully light up every evening at 4:30 and turn off at midnight. This might not seem as hallelujah-worthy to you as it does to me. I went through two timers that didn’t work before I found one that did. In fact, the day after our snowstorm, (which also happened to be the day I figured out that Timer No. Two didn’t work) I put on my Uggs and made my way through the snowdrifts like Daniel Boone and plugged the lights directly into the outside outlet. My plan was to unplug them the next morning and then plug them in again that evening.

Except that I simply couldn’t face the snowdrifts again. I don’t know how Daniel Boone did it. Perhaps it was the coonskin hat, which I don’t own. As a result, the lights stayed on full time until we could finally get my Yellow Bug over the icy ridges and ruts that were our neighborhood streets, and to a Lowe’s. I waited for a horse-drawn sleigh like I see in every Bing Crosby Christmas movie ever made, but none appeared.

But the real way I can tell that it’s Christmas season is the daily ring of the doorbell indicating a package delivery from Amazon. My definition of shopping small is using my iPad instead of my computer to place my Amazon order. I know I should be more loyal to small businesses given that my parents were small business owners themselves. Haters, don’t hate.

Speaking of my parents, yesterday I began thinking about my parents and the Christmas party they threw for their employees each year. That’s where I learned about Tom and Jerrys and Grasshoppers (the adult beverages, not the cartoon characters or insects).

Our house was small. Very small. And yet every year Mom and Dad would entertain some 25 or 30 folks — mostly employees and their spouses, but a few others as well, including my grandparents. Drinks flowed freely, including the above-mentioned Christmas cocktails. Well, I can’t say that Grasshoppers are limited to Christmas, as my sisters and I have been known to imbibe with my cousin Marilyn while visiting our old stomping grounds in the summer….. 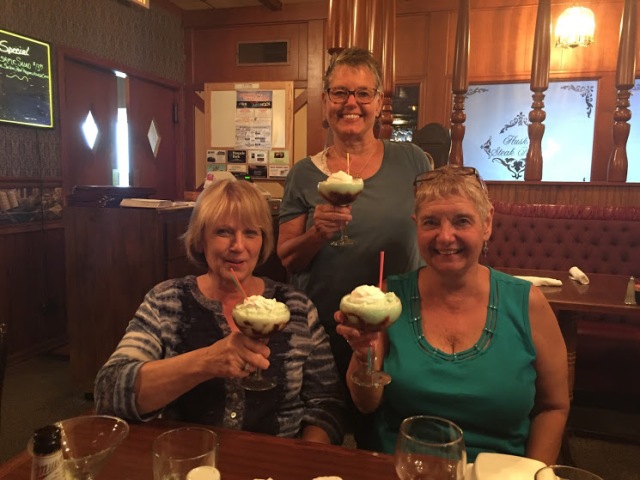 Still, the green color makes it an ideal Christmas cocktail. So perfect, in fact, that I serve them as dessert for our Christmas celebrations.

Anyhoo, despite the fact that Grasshoppers consist primarily of crème de menthe, crème de cacao, and ice cream (making it a delicious dessert drink), my grandmother — who rarely drank any other time of the year — would drink a Grasshopper as her adult beverage of choice at the Christmas party. And since ice cream was involved, there wasn’t a lot of sipping. The drink would disappear fairly quickly, and her cheeks would get pinker and pinker with each sip.

Though I was able to attend very many holiday parties during my many years of employment, I can’t think of a single one I would need to revisit. But I would travel back through time to one of Mom and Dad’s Christmas parties in a heartbeat.