I learned to type when I was in high school, where it was mandatory for girls to take Typing 101. While I was only a fair math student, and biology and chemistry were not my forte, I was really good — no, GREAT — at typing. I took that skill into the real world, both in college and in many of my jobs between undergrad and graduate school. 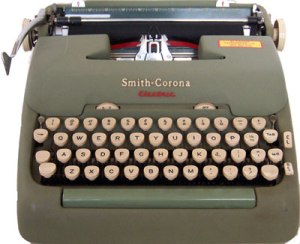 I learned to type on a totally manual typewriter, then moved on to an electric. I can still remember the sound of that ding that let you know that it was time to hit the lever to move to the next line. At some point, rather than a lever, it was a button. Suweeeeeet! My friends, it was not uncommon for me to type between 90 and 100 wpm (which is typist extraordinarian shorthand for words per minute),  with no mistakes. Well, not many at any rate. I still kept a bottle of White-Out by my typewriter.

Now, of course, typewriters went the way of the Dewey Decimal System Card Catalogs about which I wrote yesterday. We no longer type. Instead, we keyboard. And it’s hard to argue with me if I say that keyboarding is a stupid word.

Having bragged about my typing speed, I will now tell you that I am an incredibly slow texter. I text A LOT. But I am one of those sad seniors who holds the phone in the left hand and pokes the keys with the index finger of the right hand. No thumbs involved. My grandkids not only text with their thumbs, they can do it on the run. Sometimes they even do the entire thing with one hand, using one thumb.

I couldn’t text with my thumbs even if I wanted to, because I have arthritis in my thumbs. Mom told me if I kept cracking my knuckles, I would eventually have arthritic thumbs. It was just one of the many things about which she was correct. (She also wasn’t crazy about my first husband.)

It was no surprise to read an article recently that told of a research study indicating that the quickest way to keyboard on a mobile phone is using your two thumbs and autocorrect. No surprise there. The study went on to show that kids aged 10-19 years old are faster texters than older people. The only thing surprising about that finding is that some university or organization spent money to ascertain that information. Heck, they could have just asked me. My grandkids text at the speed of sound.

Still, there was one interesting thing I learned from the study. It seems that these 10 – 19 year-old texters type, er, keyboard nearly as quickly as their than 40-year-old mothers and fathers type, er, keyboard on a regular computer keyboard. According to the study, 40-year-olds keyboard about 50 wpm while sitting at their computers, while my grandkids and their friends text at a speed of 38-40 wpm.

As you can see, neither can compete with the 90-100 wpm this Nana TYPED on her handy dandy Smith-Corona.

3 thoughts on “At the Speed of Light”