I had lunch the other day with a friend who is about my age. That means that she, like I, was in her late ‘teens and 20s during the tumultuous 70s. She told me a story about herself that I hadn’t heard before (or at least don’t remember hearing; if I was in my 20s in the 70s, I’m in my mid-60s today and there are a lot of things I don’t remember!).

She grew up in a small town in Maine, and went to a tiny now-nonexistent Catholic college in Burlington, VT, for her undergraduate degree. She must have done well, because she got a scholarship to Columbia University. You know, the Columbia University in New York City. It was 1974. School started in September. By November, she had called her family and asked them to come get her. She was ready to come home. She didn’t find the coursework beyond her abilities. She found living in NYC beyond — way beyond — her comfort zone.

Now, I find it necessary to explain that my friend is not a meek and fearful person. She is a strong woman who eventually got her Master’s degree in Library Science from the University of Denver, and held important library-related jobs before she retired recently.

But the 1970s in NYC frightened this poor inexperienced girl from a tiny town in Maine. And she never regretted her decision to leave the Big Apple.

After she told me this story, we began talking about what it was like to be a young adult in the 1970s. Though in 1974 the Vietnam War was mostly over, the cries of LBJ, LBJ, how many kids did you kill today? still rang in our heads. Women were burning their bras in support of equal rights for women. Young adults were running around barefoot wearing flowers in their hair. African Americans were fighting for civil rights. There was a lot of energy in the air nearly everywhere you went. And often — despite the chants to make love, not war — there was a lot of anger and angst…… 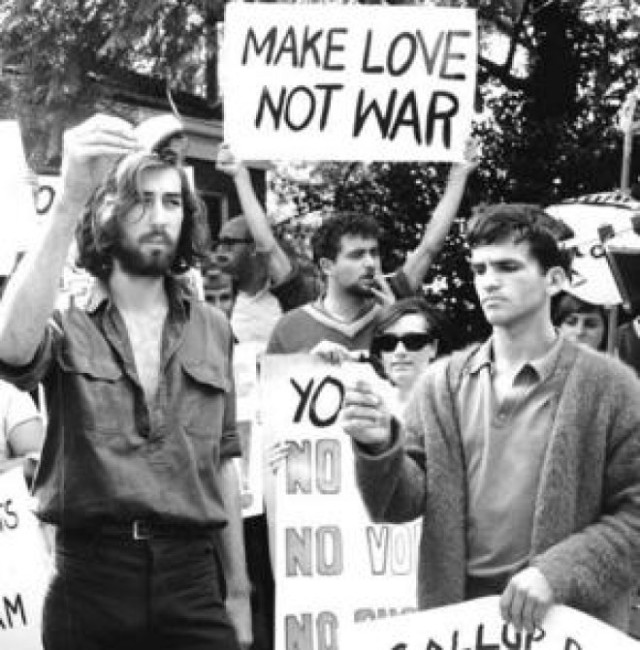 But the marches and protests were mostly in big cities. So imagine living in NYC where they told her that if she missed the subway stop for Columbia University, she should ride to the end of the line and head back instead of getting off at the next stop which was Harlem.

The 60s and 70s were a time that’s difficult to explain to our children. The 50s had been a time where conformity ruled. Still stinging from the effects of WWII, people wanted nothing more to live in a little house in a quiet neighborhood where men put on a suit and tie every day and went off to their job while women stayed home to care for the children. Everyone was happy.

Or were they? In the late 60s, the Vietnam War got everyone giving second thoughts about nearly everything. Later Baby Boomers perhaps didn’t find the protests and open sexuality as disconcerting as those of us born earlier — closer to the end of WWII. I remember being caught between wanting to put flowers in my hair and wanting to polish up my saddle shoes.

The 60s and 70s changed the world forever, and I don’t think I would change the course of history if I had the chance. I might make different personal choices, but lots of good things came out of those crazy times.

But it was quite a world for those of us who grew up in Rumford, Maine. Or Columbus, Nebraska.

One thought on “The Times, They Were A-Changin’”