Many, many moons ago, when I was in HIGH SCHOOL, I was required to take Home Economics. As Baby Boomers all know, that was the class that taught girls how to cheerfully and economically care for a home and family. I still remember and use some of the cooking tips I learned in that class from Mrs. Eckert (I think that was her name?).

As an aside, when Bill went to high school in Chicago, he was required to take Shop Class; however, the Morgan Park High School boys were also required to take Home Ec. Very progressive thinking if you ask me. I’m not sure what he learned in Home Ec, but I know for a fact that the number of meals he’s cooked in his life in a kitchen can be counted on one hand and that he never changed a single diaper in his life. But he did make a rather ugly blue plastic bowl in Shop which his mother handed off to me as soon as she saw the whites of my eyes. I have tried convincing his grands that it would be so nostalgic to own something their papa made with his own hands. So far, none has been convinced. Anyone? Anyone?…..

Anyhoo, back to my Home Ec experience. The cooking part I liked a lot. The sewing part I wanted to like, but I was simply awful. As a result, I hated sewing, then and now. I have often said that sewing — like gardening — is something I would like to like but just plain don’t. However, in my effort to exercise my brain more as I mentioned in this post, I have decided to give sewing another try.

Some years ago, our AZ neighbor (not the nudist, but the nice elderly lady who moved in after he and his wife, fled, er moved away) gave me the gift of a wallet that she made by hand. I love that wallet. It fits in my purse nicely, all of my credit cards fit into its handy pouches, it has a convenient zipper compartment for my loose change. What’s more, I often get compliments on this particular billfold…..

In fact, Jen liked it so much that she asked for, and received one from our neighbor before she passed away. The neighbor, that is.  Because yes, she was one of a handful of people in our AZ neighborhood who unexpectedly died last winter. The grim reaper was moving down our street and we got out in the nick of time.

Unfortunately, she left me with a billfold that was beginning to disintegrate. Oh, and rest in peace Patsy.

Luckily I have another, which I have been reluctant to use because then it will disintegrate and I won’t have a spare….. 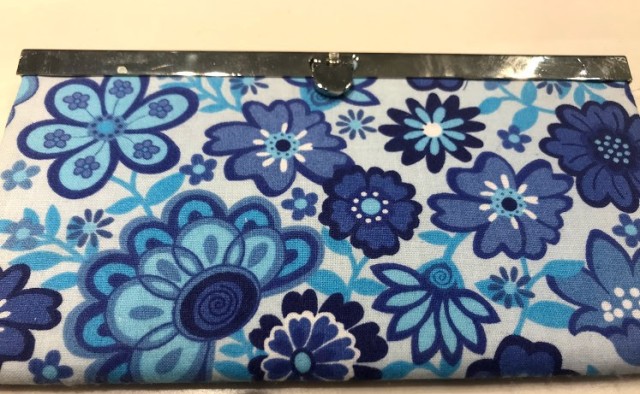 And suddenly, the other day, as I was getting more and more frustrated by my new puzzle, it occurred to me: I can try sewing again. I’m sure I’m going to like it this time around.

Using the theory that you can find anything on the internet, I search for this particular wallet. AND FOUND IT! It’s called the diva frame wallet. I purchased the pattern because I couldn’t borrow it from Patsy. Because she’s still dead.

I downloaded the pattern and began reading the instructions. It took me about 30 seconds to realize that the pattern might as well have been written in Mandarin Chinese.

Sigh, I said out loud to Bill. He looked up from the pie he was making (just kidding because see above: his Home Ec experience was an epic fail), and suggested that I go on YouTube to see if someone has posted a tutorial. Well what do you think? Of course they have. I’m pretty sure you could find a YouTube video on embalming but I’m too scared to look.

So just as soon as I get up the nerve to drag Wilma’s cast iron Necci sewing machine from the basement, I am going to dive in to my latest project.

Oh, and are you ready for this? I signed up for a beginners’ sewing class at Joann’s. I’m hoping like hell that the teacher’s name isn’t Mrs. Eckert.