He adopted a role called Being a Father so that his child would have something mythical and infinitely important: a Protector. – Tom Wolfe

Bill has a wonderful memory of his dad. When Bill and his siblings were young, the family would drive nearly every Sunday from their home on the south side of Chicago to Hobert, Indiana, where his mother had grown up and his maternal grandparents still lived. The drive took about an hour each way. His grandmother always made fried chicken, so it was likely very worth the drive. After the meal, the family would sit around and talk, and his dad may have done a few fix-it jobs around his in-laws’ house. It would be late when they left, and the kids often fell asleep in the car. The memory Bill has is of his father lifting sleepy little Billy up in his arms and carrying him upstairs and putting him carefully into his bed.

Bill has frequently told me he would love to feel that way again, but I always tell him I wouldn’t be able to lift him. Still, that sense of total protection and safety is wonderful. My dad could bring that feeling to me too, and often did.

I was very close to my mother. A mama’s girl, really. In fact, as I said goodbye to Dagny and Maggie Faith as they left yesterday for summer camp, I explained that I would have been so sad to leave when I was a child. Why? Maggie asked me, because she was so excited to be leaving that she could hardly sit still during the Father’s Day lunch. Because I would have been sad to be without my mom for a week, I explained. I’m pretty sure she rolled her eyes.

But while my relationship with my mother was always in the forefront, I could count on my dad to be my guide. When I was going out on my very first date at age 14, I was terrified. I was dressed up in my fancy velvet and lace, but when the doorbell rang, I ran into the kitchen and hid behind the refrigerator, refusing to come out. It was my dad who came and coaxed me into leaving my hiding place and facing the music.

It was also my dad who — a few years later, when I was about to take my driver’s test — took me to the big parking lot at the Agricultural Park just east of town to teach me to drive. A few years after that, he helped me buy my first car.

When Bill decided to ask me to marry him, he asked my dad’s permission (despite the fact that I was in my mid-30s and had been married before). Mom and Dad had been to dinner with us, and on the way, they had witnessed a fight between Bill and me. I drove home in my car with Mom (still angry), and Bill drove home with Dad in his. Bill dove right in and told my dad that he wanted to ask me to marry him. Dad was quiet for a few beats, and then said, “Well, it’s fine with me, but I wouldn’t ask her tonight.”

People grow up successfully without dads or father-figures, but there can be no denying that having that kind of a protector figure in your life can set you on a good path. It’s nice to have someone who is always your champion. I, for one, could always count on my dad to be mine. I know he still champions me in heaven.

And cheers to the other fathers in my life….. 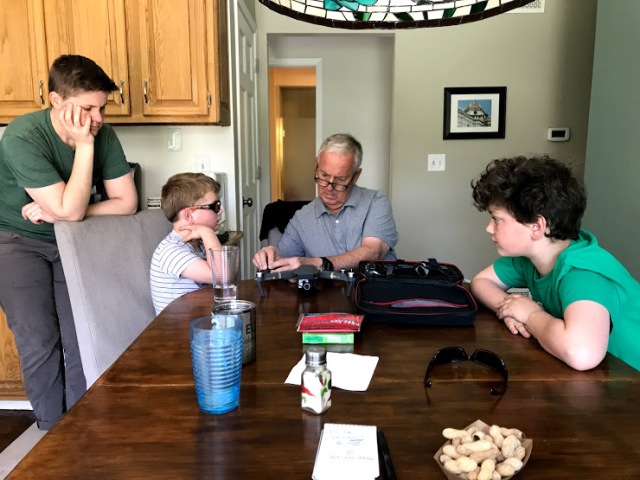 2 thoughts on “My Heart Belongs”