There’s thems that have it and thems that don’t. I’m talking about fearless cooking skills. I’m afraid that I’m in the don’t category. I will try a new recipe, but I have to be pretty sure about the ingredients and the process before I will dive into something totally new. That’s why making tamales and pierogis from scratch all by myself remains on my bucket list, and will probably still be there when I leave this earth.

But our AZ neighbors are fearless cooks, indeed. They are, after all, the ones who gave me the courage to make homemade summer sausage last winter. It was arguably a success…..

Our neighbors Dale and Jan are snowbirds like us, except that they come all the way from Alberta, Canada. We have eaten at each other’s houses on several occasions. Jan’s family is of German origin, and she fondly recalls her mother’s homemade noodles. In tribute to her mother, they have served us delicious homemade noodles on a couple of occasions.

The other day, I received this text from her: Supper at our house? No heavy German food — trying for Asian this time.

Here’s the thing: When I am trying for Asian, I throw some chopped up chicken into a wok along with some veggies and some Kikkoman teriyaki sauce. My stir fry (for that’s what I call it, which would make most Asians cringe) is an easy and quick meal that both Bill and I like. But I would never call it Asian food.

I have a daughter-in-law who is Asian — Cambodian, in fact. She is my favorite partner with whom to share Asian food. She has introduced me to Vietnamese pho, Korean BBQ, Hawaiian poke, Japanese sushi, and Chinese hot pot. I like them all.

BUT I WOULD NEVER TRY TO PREPARE A SINGLE ONE.

But as I indicated early in this post, our neighbors are fearless in the kitchen. Bill, Jen, and I were the lucky beneficiaries of their having entertained a Japanese friend the week before.

When we walked into their house, I immediately asked what they were serving. (By the way, my mother did attempt to teach me good manners, but I apparently wasn’t paying attention to the lesson dealing with eating at friends’ houses.)

But was I ever delighted when I the answer was KOREAN BARBEQUE! They learned the tricks the week before from the Japanese friend who visited them. They, in fact, took a trip across town to the Korean grocery store specifically to buy the appropriately-cut beef short ribs and the necessary ingredients for a delicious bulgogi sauce.

The ribs were still marinating when we arrived…..

…..and Dale was in the midst of preparing a rice dish…..

…..that was one of the prettiest bowls of food I have ever seen.

In addition to the rice and Korean short ribs, we enjoyed a chicken stir fry that was delicious….. 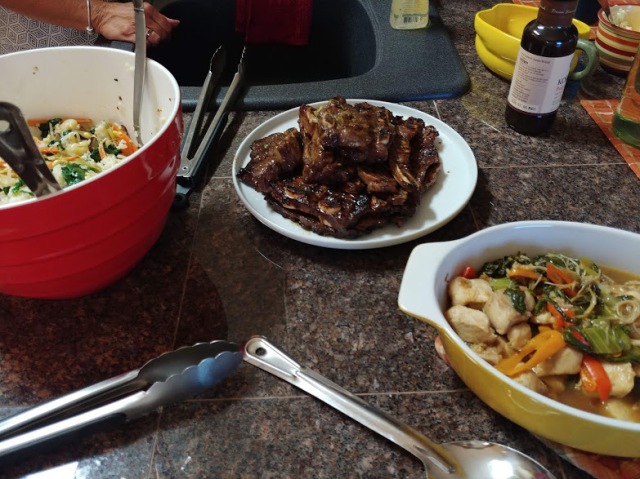 See what I mean? Fearless.

The good news is that they shared their recipe with me, and I will share the recipe with you. But not until I’ve tried it first.

One thought on “Surprise Suppers”