Baby Boomers are tough old birds. We didn’t get coddled by our parents. We rode in cars with no seatbelts and the windows rolled up as our parents smoked their Marlboros. Many of us had jobs by the time we turned 13 or 14. Thanks to medical advances, we didn’t die of smallpox or polio or tuberculosis or diptheria or whooping cough. Heck, even as we age, medical advances are happening so quickly that we may live well into our 90s or beyond. God willing, causes and cures for all sorts of dementia might even allow us to know which of the young whippersnappers are our kids and grandkids, and why they’re so concerned about our wills.

In other words, quit your complaining about us because we are going to be around for a while. And with new and improved hips and knees.

When Bill and I are in AZ for the winter and spring, we are well aware of just how focused this area is on the +55 set. In east Mesa, where we reside — along with an inordinate number of retired people from Minnesota and Illinois and Nebraska and Wisconsin and Alberta, Canada — it’s about as easy to find an orthopedic surgeon as it is to find a Starbucks in Colorado. One on every corner. I should know; I went to see one yesterday because of a problem with my knee.

The other day, Bill and I were driving around doing errands, and we decided to pull our car into Discount Tires because a low tire pressure warning message had gone on a few days before.

As an aside, I love Discount Tires. I should do a commercial for Discount Tires. Maybe I and a bunch of other seniors from this area should put on colorful body suits and run around together accompanied by a cheerful tune — I suggest Go Your Own Way by Fleetwood Mac since we’re Baby Boomers — and pitch Discount Tires which will fill and repair tires at no charge. Young people and Apple shouldn’t have all the fun.

Anyway, since we were in the ‘hood and since it was nearing dinnertime and since I had nothing at home to cook, we decided it would be prudent to have dinner out someplace. And there, right next door to Discount Tires, was Golden Corral.

Ah. Golden Corral. The restaurant with everything. I mean everything. You can eat fried chicken, steaks, Italian, Mexican, seafood, comfort food, a nearly infinite number of desserts (including a chocolate fountain). For $13.99, you can choose from a buffet that would make a French person’s head explode. Nothing is exceptional, but most of it is reasonably edible. And when it’s five o’clock and there’s an all-you-can-eat restaurant, you’re going to have a lot of Baby Boomers. Including Bill and me. What the heck! It’s been years since I’ve drunk from the Golden Cup. (By the way, beverages are extra.)….. 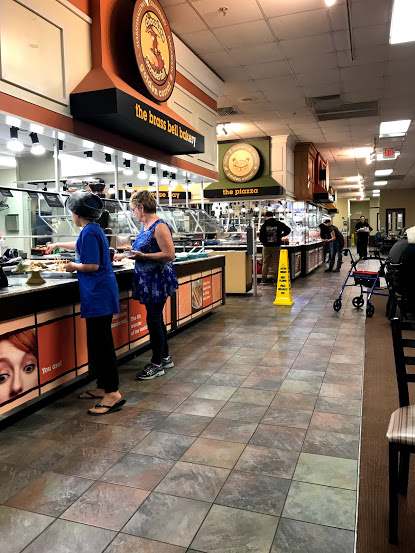 Notice the walker. Walking aids can really slow you down in a buffet line.

The first thing I noticed as we walked in the door was that everyone — and I mean everyone — was a senior citizen. So, the second thing I noticed kind of took me by surprise. There was a sign indicating that one whole room was closed off for a private event.

Party on Fellow Old People, I thought to myself.

And then I noticed a sign indicating the nature of the private event. In particular, notice the sign in the upper left corner….. 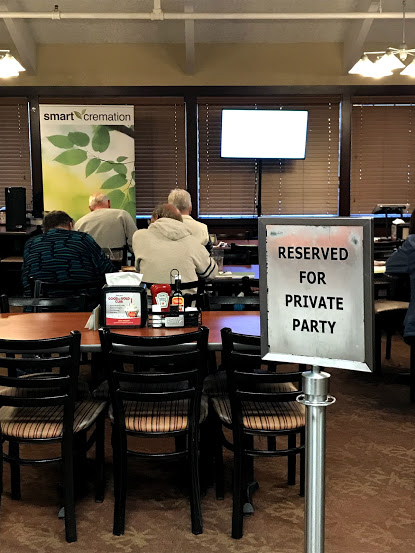 Bill sighed, and said, “Seriously, Kris. I don’t care if they offered me a free dinner. It would be a no-go for me.”

I hope they enjoyed their barbecued ribs before they sat down to sign their soon-to-be-dead bodies over to Smart Cremation. Don’t they look sad and resigned to their fate?

It was almost enough to make me skip the chocolate fountain.

One thought on “Pure Gold”