Piddling Penny-Pinching
As I have already mentioned, Jen got a new puppy that she named Winston. Despite the fact that Winston is three-quarters poodle and only a quarter Yorkie, he looked more like a Winston than a Jacque. Anyhoo, when she picked him up, the breeder told her that he was nearly housebroken using what she called a piddle pad. She suggested that Jen continue using that method of housebreaking. But she went on to say that when she orders them from Amazon, she orders piddle pads for humans. Why? Though they are exactly the same, the pads for dogs are significantly more expensive. Apparently people are more willing to pay hard-earned cashola for their dogs than for Grandma.

It’s a Lego! It’s a Robot!
My eight-year-old granddaughter Mylee has liked playing with Legos since she could fit them together. At 3 years old, she was building complex vehicles and buildings using my meager Lego supply. So it’s not surprising that she has been participating in an after-school Lego Robotics class. Last Saturday was the day that they shared their hard work with the public. Mylee was proud to show me the results of her team’s — the Super Rainbow Robotics — hard work…..

Next year she moves into the competitive category.

It’s a Bargain
While I am embarrassed at how much food I waste, there is something deep within me that won’t allow me to pass up a Buy One-Get One Free item. The other day, I was purchasing whole nutmeg, because EGGNOG. The problem was, the only brand the store offered was McCormick’s whole nutmeg, and it was Buy One-Get One Free. Dang. I won’t go through even one jar before the expiration date, but I simply couldn’t leave the store with only one. I’m going to start seeing who among my friends and family would like a free jar of whole nutmeg. Any takers?…..

Cheers
Though a faithful wine drinker, Jen came across an interesting whiskey that she allowed me to taste the other day. The liquor’s developer is a country singer — John Rich — who apparently decided one shouldn’t have to take out a second mortgage to drink tasty whiskey. Friends, it was delicious. Now if I can just find Redneck Riviera Whiskey somewhere near one of my two homes……

Trash
Since I’ve been buying most everything online (and have managed to avoid getting any of my packages pilfered by porch pirates), there are many, many boxes that we have to find a way to fit into our recycling bin. Bill spent an hour the other day cutting up boxes. Bless his heart….. 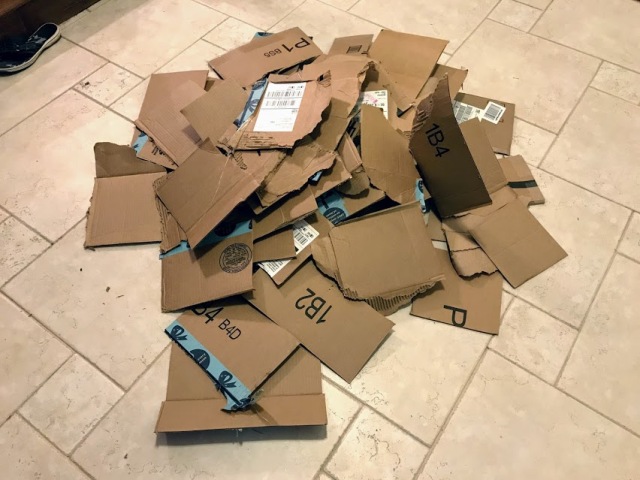 Lettuce Pray
I’m delighted to see lettuce back in the grocery store. They promise me that it comes from farms that aren’t producing lettuce with e-coli. Should I believe them?