Yesterday started out like any other day. Little did we know that before the morning was over, Bill was going to be a superhero.

Monday we had our monthly appointment with the medical people who are supervising Bill’s participation in the research study. As instructed, we took all of the accoutrements to the study — the empty vials, the remaining unused vials, the cannula inserter, the pump, etc. The medical people did their thing and two hours later they sent us on our merry way, presumably returning anything that was important. Like, say, the cannula inserter.

We spent the remainder of the day packing our suitcases to leave for AZ, where I now sit writing this blog. We got to bed reasonably early, and set our alarm for 5:30. That would give us plenty of time to relax a bit in the morning over a cup of coffee. We would get Bill hooked up to the pump around 6:30. That was our best-laid plan, and you know what they say about that.

I got everything prepared, and went up to the bedroom to complete the task. I went over to the drawer where we keep the cannula inserter, and lo, and behold! there was no cannula inserter. Panic set in, and with a sinking feeling in my stomach, I realized that the cannula inserter was missing in action, likely sitting on the counter in the doctor’s office where we had last seen it.

We have been told over and over that should we run into any problems, we were to call the Helpline number and would receive immediate assistance. And so, that’s exactly what we did.

Now, here’s the thing: We have never had a reason to call the Helpline prior to this, but I had a clear picture in my mind just what the Helpline Call Center looked like. It was in a fancy office building in some large city somewhere, maybe Omaha, NE, and in a very sterile room there were dozens of desks at which sat professional men and women wearing headsets answering calls about the clinical research study. Thank you for calling Neuroderm, how can I help?

Instead, at 6:30 on a Tuesday morning, after a couple of rings, what I heard was, hello?

Is this the Helpline? I asked. It was. One fellow, huffing and puffing because I caught him as he was at an aerobic class at the gym. His name is David, and he IS THE HELPLINE.

I explained our problem, and he was as nice as could be. He continued to talk to me as he hurried up some stairs to his lonely desk. This led to that, and his best solution was that it was possible that there was an office in Phoenix where we could get another cannula inserter if the moon aligned with the sun and we had lived a good and charitable life.

Some people have inserted the needle themselves without an inserter, David said (he had finally caught his breath after the aerobic class). It’s not something we really recommend, however.

If David can find us an inserter in Phoenix, I said to Bill, worse case scenario is that you could be connected to your pump by 2 o’clock this afternoon.

I glanced over at Bill, only then noticing that while I was talking to David, he had jabbed two needles into his legs without a single yelp. God bless his super hero heart.

At any rate, we are settled into our house in AZ, and things can only go up from here. If, at any rate, the new inserter arrives via FedEx by tomorrow at 10 a.m. as planned. But we plan; God laughs. Fingers crossed.

As we sat at the restaurant at the airport with a double bloody mary sitting in front of me (never mind that it was only 8 o’clock in the morning), I told Bill that God threw us this curve ball to help me know that we will survive this Year-of-the-Research-Study because nothing can stop this man….. 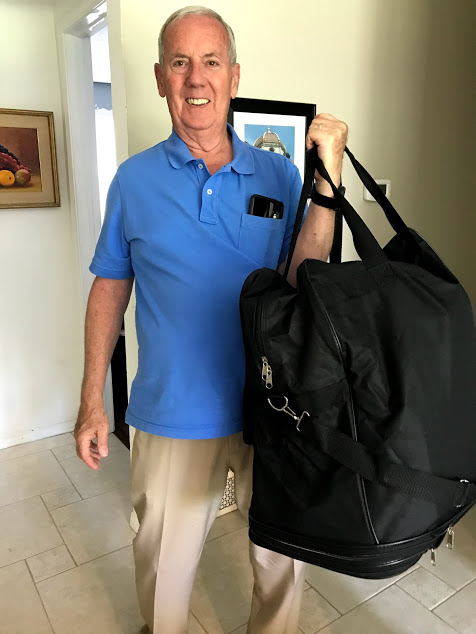 3 thoughts on “We Plan, God Laughs”