For many years, Cocoa Beach, Florida, was a company town.  In fact, the area is known as the Space Coast because NASA has been such a big presence.  And there really is I Dream of Jeannie Lane and Borman Drive (named for the astronaut, not our family). My husband and I came to love Cocoa Beach because he worked for a company that supported NASA, and he went to Cocoa Beach often.  Once when I was with him we decided to buy a timeshare at the Resort on Cocoa Beach, which wasn’t even built at that point.  And, so, just about every year since the turn of the century, I and some combination of family have stayed there.

But, as Thomas Rhett tells us, life changes.  And so has Cocoa Beach.  NASA is still there, but the space program is not much talked about any more.  For many years there were signs in the elevator advertising upcoming launches, which could be seen from the Resort’s beach if the weather was clear.  It has been a while since I’ve seen one of those signs.  And, Cocoa Beach has grown; when our Resort was built, our view to the ocean was unblocked, but now several large condo buildings partially obscure our view.  Our favorite place to eat crabs, Crab Heaven, is gone.  It burned down and never had success in its new location, so it closed for good.

As Thomas Rhett also points out, change isn’t always bad.  For instance, while there are more people up and down the beach, the Resort beach is still uncrowded, because there are no more people staying there now than there were in 2000.  And while the faithful beach chair guy Smitty has retired, his replacement is just as nice and efficient.  And, I miss Crab Heaven, but its replacement is Ms. Apple’s Crab Shack.  Ms. Apple runs a tight ship, and she has the best crabs we’ve ever eaten.  The first time we went there, I mentioned that we used to enjoy the crabs at Crab Heaven.  “Where do you think they got those crabs?” she inquired rather testily.  Point taken!  Now, instead of eating in a restaurant we can choose our own crabs…large and even jumbo…and have them steamed with plenty of Old Bay Seasoning.  And then we pick crabs at leisure on our balcony at the Resort.  That is not a bad change!…..

And of course some things haven’t changed.  Ron Jon Surf Shop is still our favorite beach store, and it’s still the biggest I’ve ever seen.  At dusk, the view at the Sunset Grill 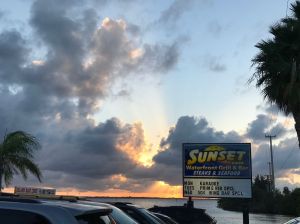 hasn’t changed either.  And the beach is as wide and the ocean as beautiful as ever.  Body boarding is as much fun in 2018 as it was in 1999.  Sitting on a chair at the water’s edge and watching my grandchildren ride the waves is a good compensation for not being able to body board myself any more.  In fact, one of the best parts of our annual trips to Cocoa Beach has been watching Mackenzie and Carter grow to love the ocean and the Resort.  We’ve all changed, but our days on the beach and beside the pool rejuvenate us just as they have done for years. 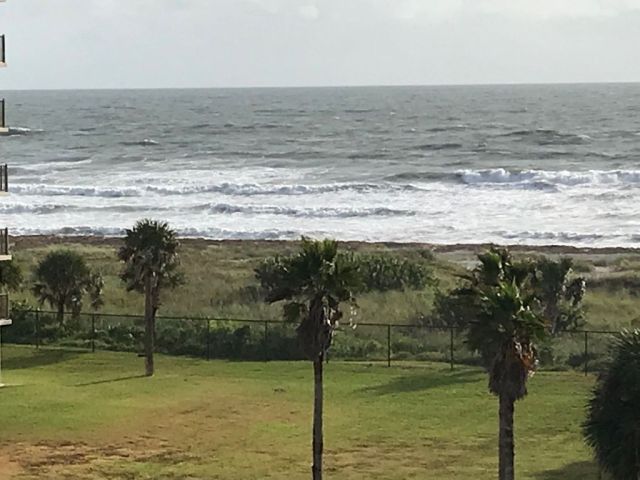 “Life changes.  And I wouldn’t change it for the world.”

One thought on “Guest Post: I Dream of Jeannie”