When we bought our Denver house back in 1992, we had a pear tree, a cherry tree, and three apple trees in our back yard, and a decorative crabapple tree in our front yard. The cherry tree had to be cut down quite soon after we moved in because it was dying. The crabapple tree was sacrificed shortly after simply because Bill got tired of having to pick up little useless crabapples from the ground.  However, the other trees have been quite healthy, until this year when it became apparent that one of our three apple trees looks to be quite sickly. I’m hoping we can save it, but it might have to go.

Some years we have pears and apples and some years we don’t. I think it often has something to do with how and if the trees were pollinated. Often it is a direct result of the trees blossoming and then a winter storm killing the flowers.

I will be perfectly honest: neither Bill nor I are ever very sad when the trees don’t bear fruit. It’s hard to keep up with the harvesting, and more apples and pears end up on the ground becoming sour than are ever actually picked and used.

This year we knew we were going to get fruit. The trees were bursting with blossoms this past spring and we didn’t have the typical late freeze. All summer long I have watched our trees — and particularly the pear tree — grow fruit. Week by week, the fruit got larger. Cole, in particular, loved checking out the apples and pears every time he came to visit to see if they were ready to eat. His little teeth nearly fell out in July when he tried hard to bite into a pear.

Finally, about a week ago, he pronounced the fruit ready to eat. He proudly displayed the apples he had picked, with bites out of each. I admitted that they looked ready.

I never have trouble figuring out what to do with the apples. I have a wonderful recipe for an apple cake that was one of my mother’s favorites which I included in this blog post.

It’s the pears that stump me every single year. Here’s why: I have learned from trial and error and my BFF Google that you don’t wait until they are ripe to harvest pears. By that time, they have fallen to the ground and been consumed by squirrels or other four-or -six legged (or more) critters. Instead, you have to figure out exactly when it is time to pick them, then store them in a cool, dry spot and let them ripen in the box.

Despite knowing all of the above, I never have quite gotten it right. The closest I came was one year when I was able to make a batch of pear butter (which has a consistency of applesauce so I am wholly unclear as to why it isn’t referred to as pearsauce) from pears that had fallen on the ground but not yet been spotted by other critters. Every other year one of two things has happened: 1) the pears have rotted on the tree; or 2) I picked them, put them in a box, set the pears in the basement for ripening, and forgot about them until June.

This year, however, the McLain kids came over to help us harvest the pears….. 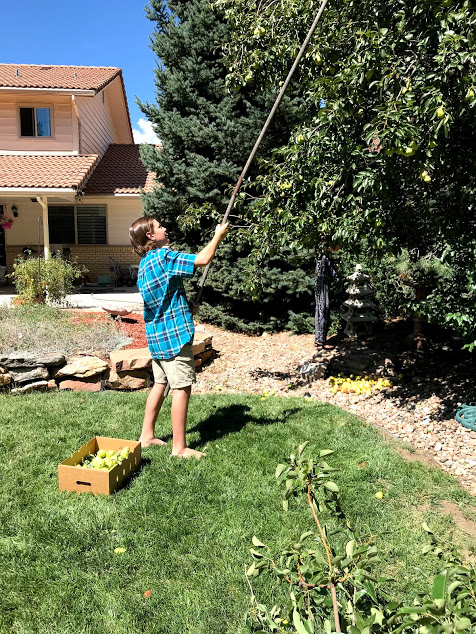 In their Sunday-Go-to-Meetin’ Clothes, nonetheless. I was pretty strict. The big ones go in the box; the little ones get tossed in the garbage…..

Maggie Faith, being a little one herself, suffered a broken heart about the little ones’ fate.

We didn’t quite complete the job, it being 90 degrees and all. But we got a few in the box, and I picked enough apples to make an apple crisp.

Fall is in the air.

3 thoughts on “Grandkids in a Pear Tree”