Last Friday when Bec and I were in Columbus on our nostalgia tour,  we were somewhat at loose ends. We had driven around the town the night before, seeing all the things we wanted to see. That takes no more than an hour because Columbus ain’t that big. We had eaten lunch at Glur’s Tavern, its claim to fame being that it’s the oldest continuously operating bar in Nebraska. We drove up 13th Street and down 14th Street to replicate the activities of our youth, when we probably did that same thing about a cajillion times. Unlike the days of our youth, we didn’t see anyone we knew.

Jen saved us by FaceTiming us about that time. Thank heavens.

“Here’s what you need to do,” she ordered us, er, suggested to us. “Drive to Stromsburg.”

Stromsburg, Nebraska, is about 35 miles north of Columbus. Despite its close proximity, neither Bec nor I had ever visited the unofficial Swedish capital of Nebraska. I know for a fact, however, that there were folks from Stromsburg who made their way on a regular basis to Columbus to buy their bread at Gloor’s Bakery back in the day. I know this because the reason Jen knows about Stromsburg is that a very good friend of hers (who also lives in Fort Collins) was born and reared there, and her family did exactly that. Small world.

Jen promised us it would be worth the drive. If nothing else, she insisted there was a very good coffee shop in the town center. I frankly doubted it, having seen the dismal cafes that most small towns feature. Still, see above. We had nothing else to do.

The drive is pretty if you like that sort of scenery (which I do). There are lots of fields of corn and soybeans with a silo or two thrown in. Very Willa Cather-like. I’m waiting to see Antonia Shimerda (of My Antonia) running across the field, except that she’s Bohemian and not Swedish…..

Anyway, it wasn’t hard to find the town center because the entire village is only about one square mile. But its outside appearance surprised me…..

…..and its indoor appearance astounded me…. 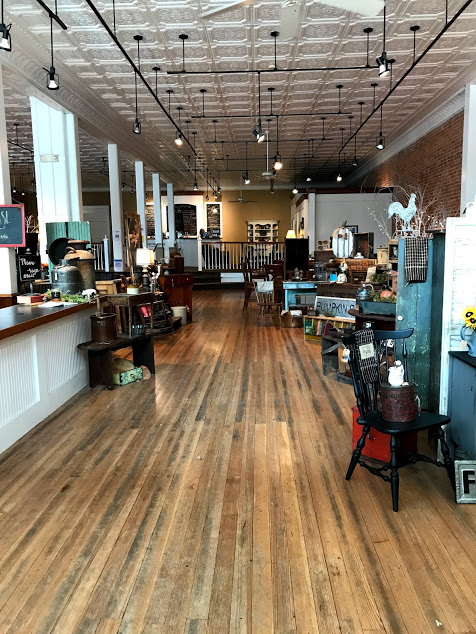 It was clear that this was not your typical midwestern farm town coffee shop. It was quiet, and Bec and I enjoyed our lattes and even did a bit of gift shopping. The proprietor was a pleasant young woman who had grown up in Stromsburg. She encouraged us to walk around the town square and visit some of the other shops.

We did just that. We stopped at the small grocery store and took note that it had nearly everything a body could want, but just not 175 brands of each. There were a handful of shoppers in the store.

After perusing the market, we went next door to The Apothecary which plays double-duty as a gift store and the town’s pharmacy. Bec purchased a couple of items, and as we went to pay, we struck up a conversation with the proprietor/pharmacist, a woman by the name of Marsha Yungdahl. The story she told us is quite remarkable.

Once upon a time there was a man who grew up in the small Nebraska town of Stromsburg. As so often happens, he went away to school, planning never to return. He made a considerable amount of money doing whatever it was that he did. But the thing is, he DID return, along with his wife and family, eager to bring up his children in a safe, small-town environment with good schools and nice people.

He didn’t just return, however. He made it his mission to revive the town. He poured money into improvements, and — perhaps even more important — he talked other townsfolk into helping spruce up the village. In the years since he’s returned to Stromsburg, the town has transformed. There is a health clinic, a dentist and doctor, a butcher in the grocery store who appeals to people from as far away as Lincoln, an extremely progressive elementary school, and a bed-and-breakfast. When I asked Ms. Yungdahl where people go to do their big grocery shop, she seemed surprised. “Why, they mostly shop next door,” she said.

As for Ms. Yungdahl, her story is quite similar. She met her husband in Pharmacy School at the University of Nebraska. He grew up in Stromsburg and never intended to return. Until they did. Why? To raise their family in a safe environment near to grandparents.

You might remember that Jen and I just visited Pawhuska, Oklahoma, where The Pioneer Woman Ree Drummond and her husband are almost single-handedly revitalizing the town. In that post, I expressed my concern that when her brand is no longer popular, the town might suffer. It feels to me that Stromsburg is a bit more organic, and less likely to suffer such a fate.

At any rate, Bec and I felt quite proud of ourselves for having discovered such a hidden treasure in the cornfields of Nebraska.

Oh, and thanks Jen.

2 thoughts on “The Swedish Village in Nebraska”