Exercise is good for you. You should spend 30 minutes doing some kind of aerobic exercise at least five times a week. You should do core exercises or lift weights a couple times a week. Exercise can help prevent heart disease, lower your blood pressure, prevent broken bones, and keep your cholesterol under control.

I know all those things are true, but I hate to exercise. I always have. I do now. I always will.

Much of my life, I have been able to set aside my dislike of exercise and have faithfully grunted myself into good health. I have run, walked, or biked. I have jumped around doing step aerobics. I have danced my butt off doing Jazzercise.  I belonged to Curves. For over a year, I faithfully walked on a Nordic Track in my basement every morning before work. Never once – not for one minute – did I enjoy what I was doing. I enjoy sitting in my recliner reading the latest C.J. Box mystery. I like plopping in front of the television and watching Chief Inspector Morse listen to opera while solving a complicated mystery. I do not like putting on my stretch pants and doing anything that makes me break out in a sweat, especially since yoga isn’t in my future and stretch pants aren’t my friend.

But I do it. Or at least I do it most of the time.

Walking is my current exercise of choice. I walk pretty faithfully every Monday, Wednesday, and Friday. I have added a twist to my walking regime – Nordic walking. In addition to making me look like an incredible fool, the walking poles are supposed to work the entire body more effectively because you apply pressure on the poles with each step. I can’t confirm or deny their effectiveness. But I can certainly confirm that I look quite silly….. 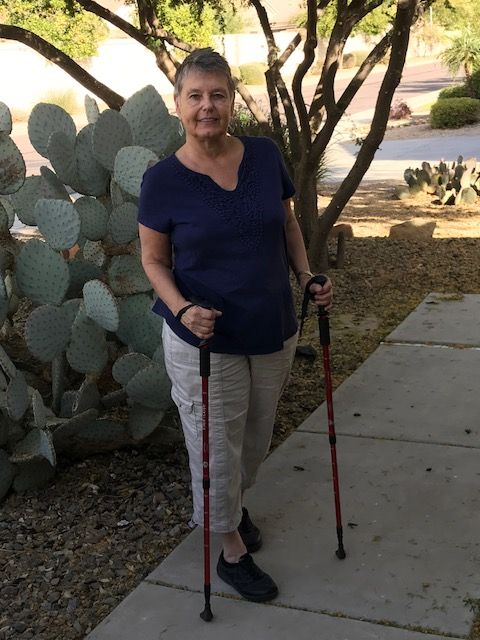 The other day the skies were threatening rain. I was trying to talk myself into getting out for my walk early so that I could beat the rain. Suddenly I remembered that I belong to 24 Hour Fitness, thanks to Silver Sneakers. I know it sounds funny to point out that I had forgotten that I had a membership in a health club, but there you have it. It had been quite some time – several years, in fact – since I entered the doors of that club. Part of the reason is that we spend nearly half the year in AZ, where there are no 24 Hour Fitness Clubs. Being the best thing about growing older, Silver Sneakers actually pays for my membership at two clubs – 24 Hour Fitness here in Denver and LA Fitness in AZ.

So I walked confidently through the door and typed in my telephone number. I then dutifully rested my finger on the fingerprint identifier. See receptionist, it told me. I did, and she looked me up on her computer. I was no longer there.

She gave me a liar-liar-pants-on-fire look. “Has it been a while since you’ve been here?” the young woman asked me. I told her the truth, that it had been several years. I learned that even Silver Sneakers has its limits, and I had been purged. Never fear, however, as I was quickly reinstated, and on my merry way to a treadmill. Thanks again, Silver Sneakers.

Bill likes exercise about as much as I, which is to say not at all. The difference between he and I, however, is that – see above – I enjoy reading or watching PBS mysteries. He, on the other hand, doesn’t sit down from the time he finishes breakfast until dinnertime. He’s always working around the house or in the yard or on some sort of project. Still, he is never eager to go out and pursue an aerobic activity. Unfortunately, aerobic exercise is what his movement disorder doctor recommends.

I bought him a pair of walking poles, and if I am really, really persuasive, I can get him to walk with me, using his poles. He also has taken to riding his bike a bit. Oddly, bicycle riding has proven to be effective exercise for people with Parkinson’s.

I read recently that while exercise is critical to maintaining health, once you reach my age, exercise is not very effective at assisting in weight loss. Apparently you can’t out-exercise the food you put in your mouth.

All I can say, is exercise better be good for something, because I don’t do it for the fun of it. Seriously, do you?