Can You Justify Cheating?
You’ve probably heard that some sore losers are accusing one of the other horses in last Saturday’s Belmont Stakes of being a bit of a bad sport by perhaps blocking the competition in Triple Crown winner Justify’s race for the crown. The horse being accused (and I recognize that I’m making it sound like the horse was making these decisions all by himself) is trained by the same man who trains Jusify, thereby giving the accusation some credence. While the amount that I know about horse racing could fit inside a thimble, I will say that I reckon there’s no rule against being in front of another horse during a race, even if you’re blocking him. Still, I told Bill before the race that I was not going to root for Justify because I believe that Triple Crown winners should be remarkable horses; I simply can’t put Justify in the same category as Secretariat. But see above: I know next to nothing about horse racing. After watching the race, however, I told Bill that I was happy Justify won because maybe he was remarkable after all. So I’m a bit disconcerted to read that perhaps he got a bit of help, putting him once more in the unremarkable category.

And They’re Just Teenagers
As I have reported previously, this year I went a new route on my tomato growing. I have grown tomatoes in pots on my patio before, but this year I went with a new fancy-dancy system that was recommended by an acquaintance. She proclaimed that last year, when she used the growing system, her plants were thiiiiiiiis high. So I gave them a try. As you can see, my plants are enormous and full of flowers. And there not even close to being full-grown. They’re only teenaged-size. I’m very optimistic that I am going to have a great crop of tomatoes this year. I planted roma and grape tomatoes. My mouth is watering already….. 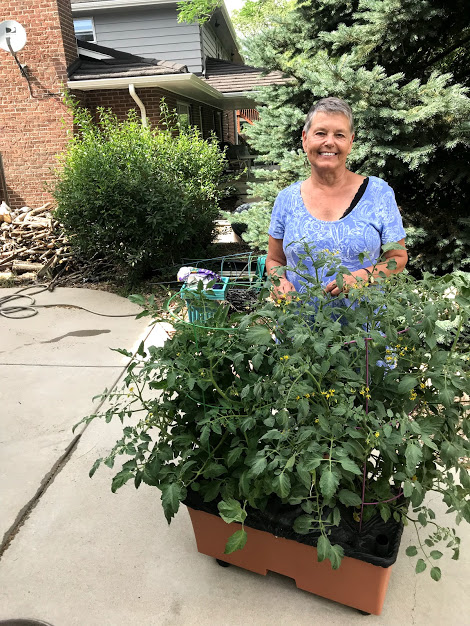 Slurp
Our 13-year-old grandson Alastair loves fish and seafood. If he goes to a burger joint, he is just as likely to get fish-and-chips as he is a burger. Maggie Faith is also a fan of most seafood. She seems particularly drawn to scallops. But even more so, she is game to try anything. The McLains (who, as you will recall, are traveling via RV around the western United States) have currently landed in Seattle. The other night, they all went to a seafood place, where they enjoyed calamari and crab cakes and shrimp. And oysters on the half shell. None of the kids had tried them before, but Alastair and Maggie were game. Alastair proclaimed them to be “interesting,” but he had a smile on his face as he slurped them down. Maggie seems to be enjoying them a great deal….. 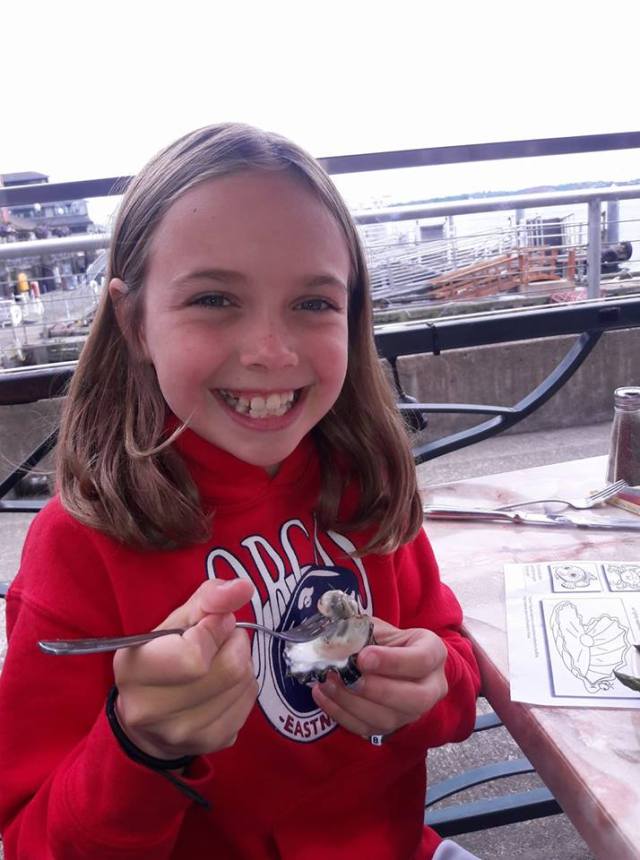 As for Dagny, she has no interest in any kind of fish or seafood. In fact, according to her mother, she informed her that “I don’t eat anything from the sea.” So there. I’m sure there was some kind of meat on the menu, and undoubtedly, that’s what Dagny and her dad enjoyed.

Wall Plated
I finally got the plate hangers — a task not as easily accomplished as one would think. It took three Targets before I had the proper number of plate hangers. I was determined that this time we would use the metal holders, because we have used the decals that stick to the back of the plate before, and it was an epic fail. But Bill started hanging them, and I’m very happy at the way they look. I will post photos when we’re finished. That kitchen wall has been blank now for three or four years. Joanna Gaines, I’m not.