Two things happened yesterday that made me smile.

The first was that I received my package of goods that I had ordered from The Pioneer Woman Mercantile last week when Jen and I journeyed there. Five plates that will form a wall decoration in my kitchen on the off chance that I actually remember to buy plate holders from which to hang them. I was somewhat concerned that they might have gotten lost because Jen also purchased some items, they arrived within a couple of days.

After opening the box, however, it became clear why my package took longer to arrive. There was no way that any one of those plates could have gotten broken in the mail. I have quite literally never seen such effective packing of breakable items. It took me 20 minutes to unwrap five plates……

But they were packaged with love. I know that because it says so right there on the box. They were undoubtedly packaged by the Pioneer Woman herself….. 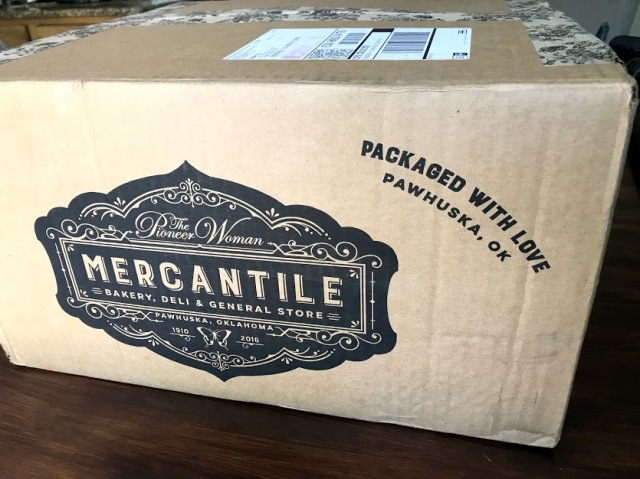 The second thing that made me happy was that I was reminded about why I love my husband. Yesterday he had his six-month appointment at his movement doctor’s office. We have gone every six months since he was diagnosed with Parkinson’s disease nine years ago. After he was put on a couple of really effective medications about eight years ago, he has really not struggled a lot with symptoms.

However, lately, we had both noticed some change in his mobility. Not huge changes, but noticeable. And being as active as he is, it sort of drove him crazy. But the nurse practitioner with whom he meets every six months took it all with a grain of salt. Your symptoms haven’t changed that much, she said. You are just experiencing your symptoms more when your medications wear off. We can deal with that.

The thing about the medications for Parkinson’s is that, because they mess with the dopamine in the brain, the side effects can sometimes be as bothersome as the meds themselves. Still, 30 years ago, the medications for PD were mostly ineffective, so it’s a blessing to be able to function almost normally as does Bill after being diagnosed almost a decade ago.

But here’s why I love my husband. He goes with the flow. He never complains. He’ll even eat pho with me if I catch him at a good time. He has accepted his physical limitations without complaint. So when his NP told him that there are options to improve his mobility, he was all ears.

What she suggested to him was that he participate in a clinical study in which he will wear a pump measuring about 3 inches square and an inch deep. The pump will give him a continuous flow of what are basically the same meds he’s currently taking. Since the flow is continuous, he won’t experience the problems that result from meds wearing off.

Bill asked her how people wear the pumps, since it must be worn 24 hours a day. She told him that people have come up with creative ideas. She excitedly told him about one man who wears a woman’s sports bra and places the pump inside that. Bill physically blanched at that notion. Nevertheless, she mentioned it several more times. I finally said, “Vicky, stop with the women’s sports bra. It ain’t happening.” Bill might go with the flow, but wearing a lady’s bra is his break point.

I’m not sure which word scared him the most: Bra. Women’s. Or sports.