Most of the regular network dramas are wrapped up for the summer. That’s okay. It was time for us to say goodbye to Frank Reagan for a few months. Tom Sellick needs a bit of time to practice up on his sighing. There are only a few shows that Bill and I faithfully watch, and (spoiler alert) it was fun to see that Jamie Reagan and his partner Eddie will be getting married next season. Let’s just hope that Blue Bloods doesn’t surprise its fans in next season’s opener with an unexpected mid-summer death like they did this season. My heart can’t take it. As for Madame Secretary, well, wait and see, I guess. A series name change perhaps?

At any rate, because we have moved to reruns or stupid space fillers, Bill and I are positively scrounging for things to watch in the evening. You would think between cable television, Netflix, and Amazon Prime, we could come up with something. The problem basically is that we can’t seem to find many shows on which we agree. He would watch Anything Mafia and I would watch Anything British Murder Mystery, and frankly, never the twain shall meet. Imagine Inspector Robbie Lewis saying, “I’m gonna make him an offer he can’t refuse.”

So we’ve started taking turns picking our nightly program. His recent choice was Kill the Irishman, a docudrama on Netflix about real-life Cleveland gangster Danny Greene that included lots and lots and lots of cars and buildings exploding. When it was my turn, I chose Rocky, the 1976 film written by and starring Sylvester Stallone. Yo, Adrian.

While Kill the Irishman was released in 2011, the story takes place in the 1970s, culminating in Greene’s death (predictably, by explosion) in 1977. On the other hand, Rocky was released in 1976. Even when they are period pieces, the more current films have a different feel to them than do the older films. I sort of like the look and feel of the films made in the 1970s, 80s, and even 90s. They’re often so delightfully cheesy. See above: Yo, Adrian.

One of the things that both Kill the Irishman and Rocky had in common were the 1970s cars. If you would have asked me about cars from circa 1970, I would have said they were big. But even with that knowledge under my hat, I was taken aback by the sheer size of the cars. Quite literally, my VW Bug could almost fit in the trunk of some of those cars.

Bill’s father was a Buick man, mainly because his brother-in-law was a Buick dealer in North Carolina. As a steel worker, his father would never have considered anything but an American car, but the relationship required the American car be a Buick. So every couple of years, Rex would trade in his car for the same car/newer version. He would drive down to North Carolina and make the switch.

My dad was a Buick man for many years. Our neighbor sold Buicks, and that accounted for Dad’s choice. Dad’s choice, that is, until one year when the two had a bit of a fall-out around the car, and a few hours later, Dad pulled into our driveway in a brand new, shiny, Mercury Marquis.  If he could have, Dad would have had the license plate read Eff U.

The car was beautiful. It was a pretty shade of burgundy. And it was big. Huge. Almost-couldn’t-fit-in-our-garage huge. He brought the car home the morning we were leaving on our summer vacation. The trunk was large enough to easily handle luggage that fit clothes and supplies for six people for a week. Heck, it could have handled a washer and dryer as well, had Mom been so inclined. Huge. 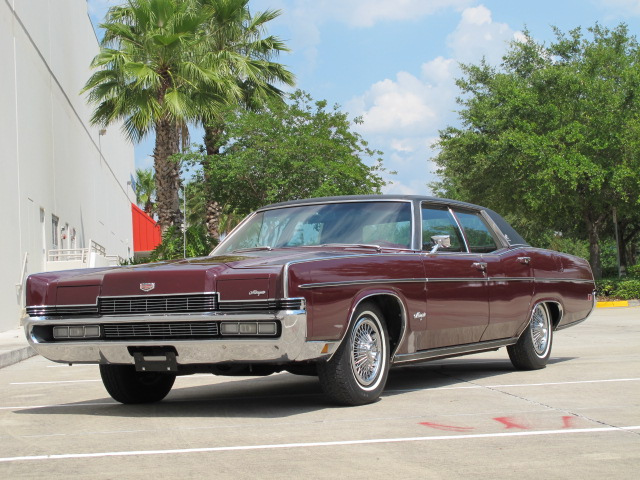 Not actually our car, but same vintage.

We all loved that car, and Mom and Dad drove it for many years. I can’t remember when they sold it. I’m sure my brother will know. But I’m fairly certain they had the car long enough that the next car was considerably smaller. Remember President Carter’s gas lines?

I don’t miss big cars. I can’t imagine having to drive (and park) cars of that size, especially with the number of cars on Denver’s roads these days. Still, they were pretty, and they were nearly as comfortable as sitting in an easy chair in your living room.

Frankly, now even easy chairs in your living room aren’t that comfortable.

One thought on “ Big Enough to Fit an Elephant”