I got a text message yesterday from my brother. It said: You took me to buy my first 45 record. I just heard it and it made me think of that day. Do you remember what song it was?

I didn’t, and I asked him for a hint, specifically the year the record was released. He told me 1967. I quickly looked up the top 100 hits of 1967, and tried to guess from the list. If I was an 8-year-old boy, on what hit song would I be willing to spend my hard-earned money? While I was still considering the list, he texted me another hint: It’s a very girly song.

Frankly, that didn’t narrow it down a lot. It seems like most of the musicians recording top 100 hits weren’t trying to reach the teenaged boy demographic. There was To Sir With Love, Happy Together, Groovin’, and others. So I took a stab: Was it Incense and Peppermints by Strawberry Alarm Clock? That, at least had a nice beat that might appeal to a prepubescent boy.

Nope. It was Windy, by the Association. I wouldn’t have guessed that in a million years. But I like that song. I know every word. In fact, I know every word to nearly every song ever released in the 1960s and early 1970s. Yep, all those lyrics taking up space in my brain that could instead be used to remember such things as where I put my passport.

Baby boomers, you undoubtedly remember 45 records. I have absolutely no idea why they were called 45s. Probably something to do with revolutions per minute? But I used to put the little insert….. 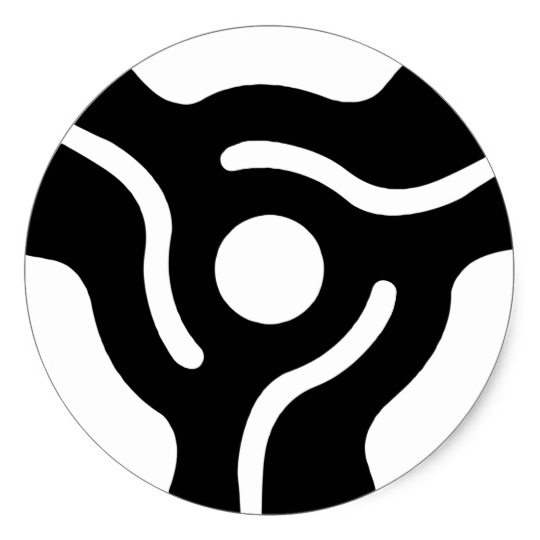 …..and then I would stack about 10 or 12 records on top of each other. When one record was finished, the next one would drop down and the record player would commence playing the next recording.

The nice thing about 45 records is that you didn’t have to buy the entire album just to get the one song you really wanted to sing with and dance to. I will admit that I am a very happy person now that iTunes allows me to do that very same thing. Of course, now each song costs $1.29 instead of the 59 cents a single 45 used to cost. Which isn’t that bad when you consider that each 45 record had a B side. Remember the B side?

I noticed as I was researching my brother’s purchase that Wikipedia also provides what song was on the B side of the 45. I will frankly admit that there were 45s I owned where a needle never touched the B side. I was interested only in the song that played on my crappy transistor radio from which I could listen to WLS Chicago’s top 40 at night if the weather was perfectly clear and the stars were in complete alignment.

When I start researching these types of things, my mind becomes like a cat chasing a sunbeam. I flit. So I began wondering if any of our kids or grandkids would know what I meant if I used the phrase “on the B side.” Using fancy researching methods, I texted my 37-year-old son and my 15-year-old granddaughter. Do you know what I would mean if I said something was on the B side?

My son answered first: Yes. Artists would release their big hit as a single cassette tape, and there was always a second song on the other side of the tape – the B side.

Well, hell! I didn’t know there was such a thing as a single tape which had a B side. Or if I did, it has been pushed out of my mind by the lyrics to Can’t Take My Eyes Off of You.

My granddaughter Addie was completely stumped. Her guess was it referred to a Type A or Type B person.

And my research didn’t stop there. I then became curious to know what – if any – B side songs became greater hits than the A side. Yep. God Only Knows, Unchained Melody, I Am the Walrus, Gloria, and Hound Dog are all hits that were on the B side.

By the way, not only do I remember the words to old songs, I can usually recall what the label on the 45 record looked like. Now, I wonder where I put my insurance card….