Many years ago when I worked hard for a living, I traveled to Washington, D.C., a couple of times a year for conferences and to visit with our Congressional delegation to seek their support on affordable housing legislation. As part of my job duties, I was assigned the task of finding places to eat for the other staff members who attended, and – more important – for the board members who accompanied staff. We ate some really good food, as you can imagine. Finding topnotch eating spots is something at which I excel, and the Washington, D.C., area offered a huge selection of spots from which to choose.

One of the more interesting venues I selected was a restaurant – I don’t even remember its name – which offered what I considered to be a great perk. There was one big table that sat right in the kitchen where diners could watch the wonderful chefs prepare the food. I managed to secure reservations at that table, and we all enjoyed the adventure.

As one who likes to cook, I also enjoy watching others prepare meals.  And it’s not just fancy chefs that are fun to observe. I used to sit at the counter at my mom and dad’s house in Dillon, CO, and watch Mom cook our dinner as we talked about life. I loved watching her mix the ingredients with her loving small hands.

The other night, Bill and I wanted to go out to dinner. Our bags were packed to leave for Denver the next day. I didn’t want any leftovers and eating out seemed logical. Our neighbors had told us about a burger joint they had visited that isn’t far from our house. I love a good burger, and our neighbors are clever cooks themselves, so we took them at their word and drove to Apache Junction for dinner at the Handlebar Pub and Grill.

We drove up to the Handlebar with some trepidation. It looked to be a motorcycle bar, nothing less. I’m not particularly nervous about a biker bar, but I don’t think I would expect great food or drink someplace that could get wrecked in a bar fight on any given night…..

However, we were greeted pleasantly at the ourdoor host stand, and there were plenty of folks waiting for a table, usually a pretty good sign. We were preparing for the 30-minute wait when the host asked us if we wanted to wait at the counter overlooking the cooking area. We were told we could even eat there if we were so inclined. We, in fact, were not only inclined, but eager to watch the goings-on.

The counter was outdoors in a covered area overlooking a large grill, a large flat griddle, and a cookstove. At the stove, there was a woman who looked like she had hopped off her Harley five minutes ago stirring some seasonings into a huge pan of cut-up mushrooms. We realized quickly this wasn’t your typical biker bar…..

One look at the menu confirmed our suspicion. Not a French fry in sight on the menu…..

We had such a fun evening eating our amazing hamburgers – Bill’s a bleu cheese peppercorn burger with a side of pecan maple acorn squash….. 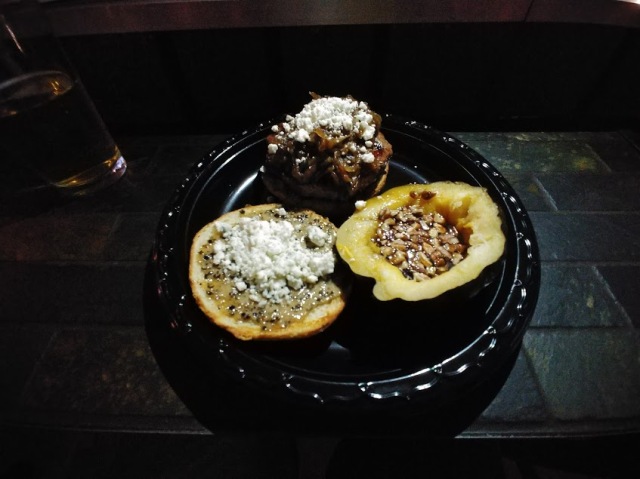 and mine a green chili burger with jack cheese and a side of balsamic Brussel sprouts that were parboiled and then cooked on the grill…..

We chatted with the cook and his sous chef (who looked like a motorcycle gangster and his biker babe). We watched him grill everything from chicken breasts to asparagus topped with feta cheese, while she prepared the Brussel sprouts, the mushrooms, and the onions cooked in Guiness beer…..

It seems as though I’m not pleasantly surprised very often any more. Most restaurant menus look disappointingly similar. Once in a while you might come across some truffle salt tossed on French fries or a bit of gorgonzola cheese on a burger. But finding a hidden gem like this in the middle of Apache Junction made our day for sure.

Next time I might have the bleu cheese potato salad, but I will for sure be eating at the counter watching the cooks prepare the meals.

2 thoughts on “Born to Be Wild”