When I was young, somewhere in the neighborhood of what we then called junior high (as opposed to middle school), I often walked from home or school to downtown Columbus with some of my friends. We would walk around downtown, wandering in and out of Woolworth’s or JC Penney’s or Montgomery Wards, or best yet, ride the elevator at Schweiser’s Department Store. Just ride the elevator. It was a THING.

One of our compulsory stops was at Tooley’s Drug Store, an all-purpose pharmacy and what-not store. We would look at the make-up, test the colognes, peruse the comic books, and finger the jewelry. Then we would head to their little café to enjoy a fountain drink. To be honest, I don’t remember my drink of choice. It was probably just a plain fountain coke as I’ve never been a big fan of vanilla or cherry flavoring. What I distinctly remember, however, is that one of my friends always – ALWAYS – ordered a Green River. My assumption then – and frankly, still – is that the soda jerk mixed club soda with some sort of lime flavoring and sugar or simple syrup. The beverage was served to my friend in a fountain glass just like my coke. I imagine she enjoyed this drink, but I can unequivocally tell you that she ordered it because it was green. She is 100 percent Irish, and green was her go-to.

What I didn’t know – and actually, just learned – is that the Green River soft drink  is indigenous to Chicago. It originated in 1919 in response to Prohibition. You might also recall that on St. Patrick’s Day, the Chicago River is dyed green. Hence, Green River.

Bill and I have a favorite hot dog place not far from our AZ home called Chicagoland. All things Chicago – hot dogs, beef sandwiches, gyros, etc. Recently, they added something to their Chicago repertoire – bottles of Green River….

Bill – who is a confirmed cola drinker (Diet Coke being his beverage of choice) — was nevertheless delighted to see the new addition and immediately bought a bottle, which we shared. Despite the fact that I love All Things Lime, I could take or leave a Green River, thank very much. Very sweet. Bill felt the same because See Above: he likes cola. Still, it brought back memories for both he and I.

It got me to thinking about what we called soft drinks when we grew up. In Columbus (and most of the Midwest) we called it pop. Bill said, however, that he grew up calling it soda. But, of course, he was one of those big city Chicagoans!

Interestingly, however, he said his cousins who lived in western North Carolina called soft drinks dope. As in, let’s go have a dope. That term originated from the fact that when Coca Cola was first manufactured, it contained cocaine, referred to as dope. I had always heard this rumor, but checked to see if it’s true. It’s true.

I asked him if they would even call an orange soda an orange dope. He looked at me like I was a crazy woman and said, “They would never have bought anything but a Coke or an RC Cola, so I have no clue.”

As a child, my pop of choice was strawberry. We never had pop in our refrigerator when I grew up. My guess is that few people did. At dinner, we drank milk or Kool-Aid. But on Saturdays when we would eat our noon dinner at Grammie and Gramp’s apartment above the bakery, she would give me 50 cents to go next door to the Ski Lounge Bar and buy a strawberry pop. Looking back, it makes me laugh to think that a bar would have orange or strawberry or grape pops. Today: wouldn’t happen.

For kicks, put on your reading glasses Baby Boomers and check out what Huffington Post says people call soft drinks in various parts of the country….. 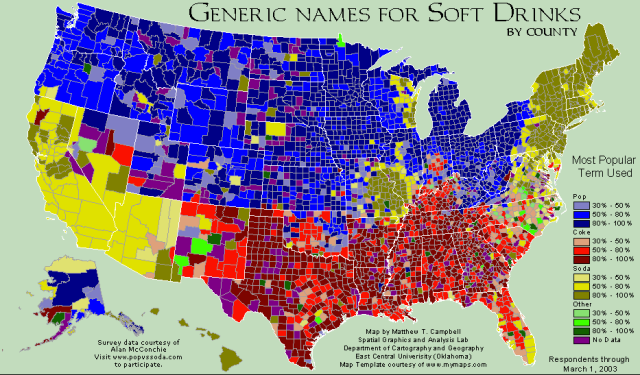