It started on Saturday, when I met my sister Jen in Boulder for lunch and some shopping. She brought me the most beautiful bouquet (because, yes, that’s exactly what it was) of dill from her garden. While my dill this year kind of petered out, her’s blossomed into more than she could possibly use for her salmon filet that she has maybe once a month….. 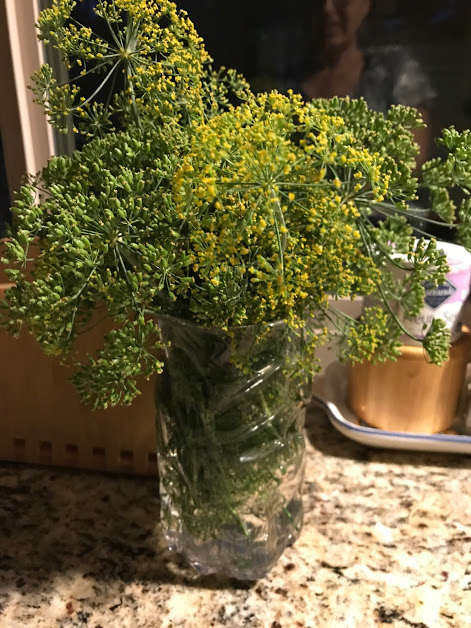 Sunday, I decided to go to Nick’s Farm Store – a garden center and farm store a few miles from my house. They always have a good selection of fruits and vegetables each summer. And about this time every year they have pickling cucumbers, along with Colorado peaches and homegrown tomatoes.

But it was the pickling cucumbers I was after. Jen’s dill just called to be put into a few jars of sour pickles in vinegar brine.

I don’t know how I learned to can. I guess I taught myself. But I learned to love pickles from both sides of my family. Every year when the pickling cucumbers were available, Mom would prepare a batch of her three-day dill pickles. These pickles were not designed to be processed and saved. They were meant to be prepared, kept in the brine for three days, and then eaten. Unfortunately, the pickles never lasted three days. By that first night, you could see one of us (usually Dad was the first) reaching under the plate that held the cucumbers down into the brine, weighted down by a large can of tomatoes or pork n’ beans. The pickles were long gone by Day Three.

But as soon as I had a place of my own, I taught myself to can. I bought a big canning pot and all of the accoutrement necessary for canning fruits and pickles. I make pickles and dilly beans. I prepare and process Colorado’s delicious Palisade peaches for eating all year long. If I can get ahold of a lot of tomatoes, I can tomatoes to use in soups and stews throughout the winter.

Sometime during Sunday night, it occurred to me that I needed to begin passing along my canning knowledge to my grandkids. So yesterday morning, I sent a text message to Jll asking if any of the kids would be interested in watching/helping me make pickles. Yep, she responded.

Bill brought up my canning equipment from the basement, and I washed the pickling cukes. About that time, Alastair, Dagny, and Maggie Faith arrived. How in the world do you make pickles? Maggie asked. She didn’t even realize that pickles came from cucumbers. I put them to work cutting up the cucumbers, which they did without slicing nary a finger. I then had them drop into each of six pint jars: a garlic clove, a finger full of dill seed, a sprig of fresh dill, a pinch of red pepper flakes, and a good pinch of black peppercorns. In the meantime, I prepared the brine, which consisted of apple cider vinegar, salt, and a touch of sugar. Dagny tasted it and proclaimed it to be perfect. In fact, I finally had to stop her from just drinking the brine as I was fearful it would make her sick.

When the spices were in the jar, I put them to work stuffing the jars with the cut-up cukes….. 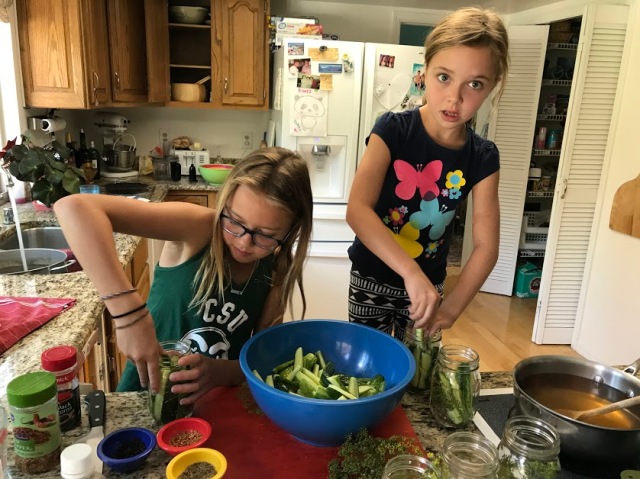 The brine went in…. 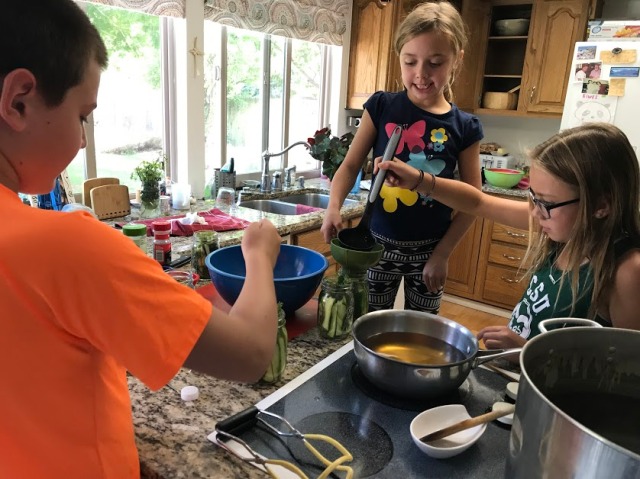 ….and the jars were closed and placed in the boiling water of the large canning pot. Fifteen minutes later, voila…… 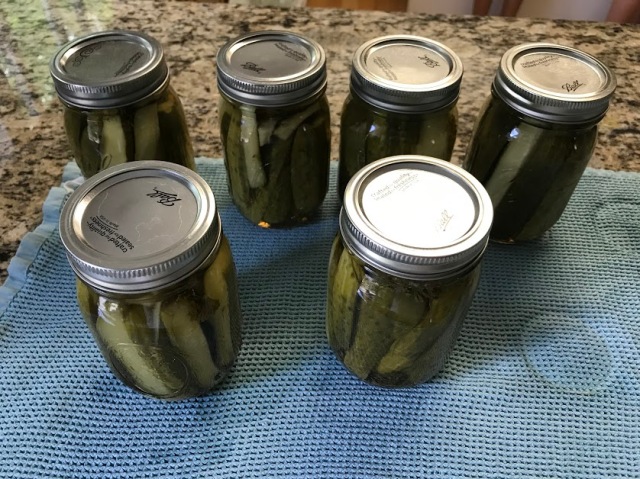 When they left for home, I sent a jar of the pickles with them. They were on their bicycles, and I presumed they had some sort of basket. When I saw there was no basket, I suggested they let me bring them a jar later.

“Nana,” said Dagny. “I can carry a jar of pickles, because I ride my bike without using my hands.”

Well of course you do.

With great trepidation, I wished her a fond farewell with her jar of pickles….. 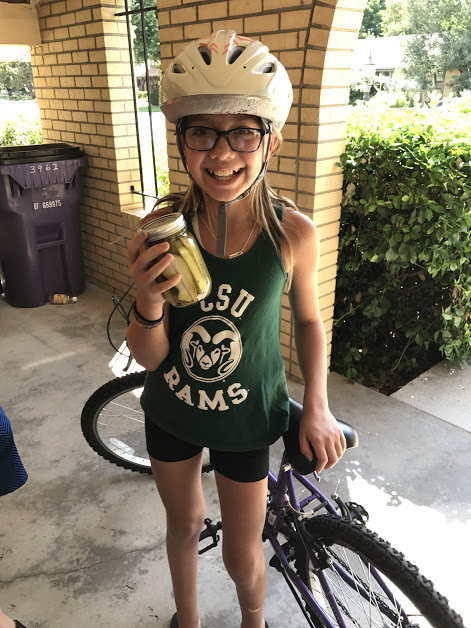 I’m sorry to tell you that a mere 15 seconds after I took this photo, disaster struck. She didn’t make it to the end of our sidewalk before she dropped the jar and there were pickles and pickle juice everywhere. She had the saddest look on her face.

I promised to deliver a jar of pickles today, something I will do this morning.

Maybe next I will make dilly beans.