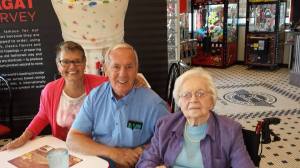 We are back in Denver following our visit to Chicago to see Bill’s mother. She is in assisted living in an extraordinarily nice retirement community that offers accommodations ranging from independent care all the way to memory care. I’ve mentioned before that she found Smith Crossing all by herself, and subsequently made the decision to sell the house where Bill spent his formative years on the south side of Chicago and move to this retirement community in Orland Park, a far-south suburb.

I have always been proud that she was so wise and recognized that the house in which she lived was going to become unmanageable for her before it actually was unmanageable. Oh, that I should be so wise when I’m in my 80s.

As Bill and I have become older, there have been a number of times in which I’ve looked at our big back yard that takes Bill literally several hours to mow and trim each week, or faced having to come up with something interesting for dinner when nothing sounds good, and thought, hmmmm, maybe Smith Crossing wouldn’t be so bad. The food is good and someone else plans the meals, cooks the food, and cleans up after. The grounds are nice and Bill doesn’t have to break his back caring for it.

“I’m thiiiiiis close to being ready to move into something like your mom’s place here in Denver,” I have told Bill several times.

Until this recent trip.

I’m not sure exactly what the difference was. Maybe it’s that she now lives in assisted living rather than her own independent apartment. Maybe it’s because we stayed in the guest room right in Smith Crossing, and so we saw many of the goings-on as we walked back and forth from our little guest room to Wilma’s unit.

All I know is I’m not quite ready to throw in the towel yet.

This is the conversation I overhead at which time I firmly decided we will stay put right where we are: A husband and wife were walking down the hall together – dueling walkers — and I was behind them. The husband said to his wife, “I recorded the dog show today.” She answered , “What dog show? Was the Westminster Dog Show on today?”

He quickly explained, “No, I recorded Hachi the Dog.” She looked puzzled. “You recorded what?” she asked. “Hachi the Dog,” he repeated.

“Spell it,” she commanded.

“Was it the Westminster Dog Show?” she asked again.

About that time, just as I thought my head would explode, they turned the corner and I could no longer hear their conversation. I therefore have no clue just how long this conversation went on. All I know is I don’t think I’m ready to have this be the conversation at my dinner table yet. 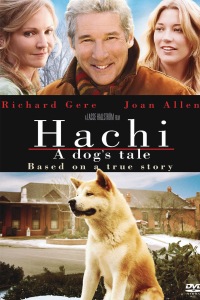 I mentioned in my Saturday Smile that there is a pub. I noticed one day on the list of events for the day that at 6 o’clock, there would be Pub Games in Smitty’s Pub. I was curious about what kinds of games were being played. Did they play poker? Maybe some kind of trivia. My curiosity forced me to go down a little after 6 that evening to see what game was being played. What I saw was a group of woman playing what was basically Bingo; however, instead of calling out B-6 or N-4, they called out Manhattan or Cosmopolitan, or Draft Beer. Apparently Bingo = pub games as long as you use names of adult beverages. You can take the 80-year-old woman out of the bingo hall, but you can’t take the bingo hall out of the 80-year-old woman.

Residents were, however, selling chances on the Kentucky Derby. Having not purchased one, I can’t tell you what they were charging for a chance. But there was a card table set up outside of the dining room staffed by a woman wearing a cardigan over her shoulders and sensible shoes, hawking chances.

“Buy your Kentucky Derby chance right here,” she called as folks walked by. I’m not sure it was all entirely legal, and the staff people were walking by quickly with their eyes decidedly looking at the floor.

One day I went to chair aerobics with Wilma. There were about 10 women sitting in chairs doing a variety of stretches, sometimes using bands to provide resistance. As little exercise as I have gotten of late, I can’t say anything bad about this activity. And God bless the exercise instructor who could be working at LA Fitness but has chosen instead to keep seniors healthy.

All-in-all, Wilma lives in a really nice place, but not one that I aspire to very soon. And now I’m going to go watch Hachi the Dog. Bill recorded it.