Early one morning this past week, my telephone dinged early, indicating a text message. I wondered who would be texting me at 6 o’clock in the morning. I, of course, expected bad news.

So I was delighted with what I saw.

Joseph and Micah, though far away in Vermont, have been indoctrinated by their mother Heather, and their various aunts and uncles, all who attented Colorado State University in Fort Collins. While I am a graduate of the University of Colorado, and therefore a foe of CSU at least one day a year (when the two teams play each other in football), I like the CSU Rams. After all, some of my money went there for two years when Court attended CSU as well.

So this picture made me smile, if for no other reason than I can’t get enough of seeing these two lovely boys’ faces….

I woke up last night, as I occasionally do, from a nightmare. My heart was pounding, and so that I didn’t fall right back to sleep and continue the dream, I got up and read for a bit. To tell you the truth, I can’t even tell you what the nightmare was about. Once I was wide awake, the whole scenario left me.

That often happens to me when it comes to dreaming. I know that we all dream all night, every night. So they say. I rarely remember my dreams. Sometimes, when the dream has been particularly interesting or funny, I will try to imprint it on my mind so that I can tell Bill the next day. Even then, I almost never can recall the dream.

Dreams are funny things, I think. So often I will dream about someone to whom I haven’t given a conscious thought in a very long time. Somewhere lurking deep in the recesses of my mind, however, that person must be present. Where on earth did that come from I will wonder.

Bill has always been a great dreamer. In more ways than one, of course, but in this case I’m talking about the dreams he has at night. Or, more to the point, mostly in the early morning hours. Like me, he isn’t aware of any dreams he has during the night. But he has some doozies in the morning just prior to awakening. Parkinson’s disease, of course, can cause vivid dreams. That might be part of the reason for Bill’s funny dreams. But I will tell you that he has had vivid dreams as long as we’ve been married. We have had many laughs as he’s told me about his most recent dream. Sometimes he talks out loud while dreaming. One night, he was suddenly giving a speech. Out loud. Ladies and Gentleman, my name is Bill McLain. It took me a moment to realize he was dreaming. I, of course, already knew his name.

And his dreams often involve trains. He is on a train. There is a train passing by him. He is picking someone up at a train station. I wonder what Freud would say about the trains. Always, the trains….

And, as I mentioned above, I still have nightmares. Not often, but probably a couple a month. Perhaps that is because I read in bed before I go to sleep, and what I often read are murder mysteries. Even though the nightmares don’t directly relate to what I’m reading, I’m sure it stirs up fears in my mind. 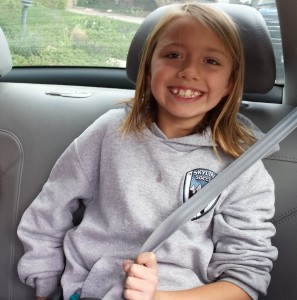 Miss Dagny, NOT walking in her sleep.

When I was a little girl, I also walked in my sleep. It was generally shortly after I went to sleep, but I never had a recollection of the experience the next day. My sister Bec and I had some sort of code phrase that indicated whether I was really awake or simply walking in my sleep. I can’t quite recollect what the phrase was. Nor do I know why we were so confident that I wouldn’t use the code phrase if I was asleep.

One of my granddaughters – Dagny – also walks in her sleep. Her parents have found her in odd places in the middle of the night. Once in the toy chest as I recall.

Court used to have nightmares when he was a kid. When he was very small – around 4 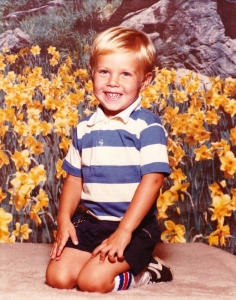 years old – he had a recurring nightmare that there were squirrels on the floor by his bed that were trying to make their way up to bite him. Scary, huh?

And speaking of recurring, I used to frequently have the dream people often have where I was attending college at the University of Colorado and when I got to my English class, I realized that I hadn’t attended a class in months and was unprepared for the test that we were taking that day. At least I had clothes on!

I’m rambling today about dreams, but only because it still amazes me that at age 62, I have nightmares.