It’s taken a good week-and-a-half or so, but we’re finally settling into our life in AZ. Just in the nick of time because we’ll be leaving in a week-and-a-half to go back to Denver for Thanksgiving and the Christmas holidays.

Life in AZ is decidedly different than in Denver. There’s the weather, of course. This time of year, the change isn’t so much different, especially during the day. In Colorado, the nights cool down quite a bit. Yesterday evening when we went outside to sit on the patio and cook our chicken thighs in our beautiful outdoor kitchen, I checked the temperature in Denver. It was 51 degrees. That’s not frigid, but we likely wouldn’t be sitting outside without benefit of a fire pit. Conversely, it was a mild 78 degrees as we waited for our chicken to cook.

One of the biggest changes is in Bill’s outlook on life. When he’s in Colorado, he is absorbed in household chores. With a yard the size of ours, there is always something to do. Here, he can putz a bit, but mostly he just relaxes. We go outside every evening and have our “cocktail party.” He smokes his cigar and drinks his beer. I have my wine or my gin-and-tonic. We discuss the problems of the world, but unfortunately mostly can’t solve them, try as we might. Besides, no one ever asks us.

We always have a series of restaurants we check out. Over the summer, our favorite pizza place added a restaurant a mere 10-minute drive or so from our house. So that was our first stop. Yep. It was still very good.

Then, of course, there is the local hot dog place. We went during the World Series, and saw the sign announcing that the day after the Cubs WIN THE WORLD SERIES, they would give free Chicago hot dogs to the first 108 customers, in honor of the 108 years since the last time they were world champs. We elected not to be one of the 108 since the hot dogs only cost a couple of bucks anyway. I have no doubt there were numerous Cubs fans standing in line.

Of course, we had to give In N Out a visit. It’s always a must-do, despite the fact that I think both the burgers and fries are, well, ordinary. Haters, don’t hate.

One thing that our area of Mesa has that is different from Denver (and frankly, different from other parts of the Phoenix metro area) is the huge number of locally owned cafes, most of which are only open for breakfast and for lunch. Our part of Mesa has a significant number of snowbirds, who miss their home cooking but not their cold weather. These restaurants often cater to customers originating from a specific place. One nearby restaurant – Fran’s Café – features home cooking and lots of photos of Minnesota. There is a restaurant which we have never visited called the Iowa Café. Their menu undoubtedly includes pork tenderloin sandwiches and loose meat sandwiches. Loose meat sandwiches. Don’t get me started. Like a sloppy joe without the flavor. Haters, don’t hate.

Our little restaurant of choice, which we visit nearly every Sunday after Mass, is called The Little Kitchen. It opened several years ago, and was originally owned by folks from Colorado. It was only a coincidence that we stopped in, not knowing about any Colorado ties whatsoever. I just liked the name. And the fact that they offer FREE COFFEE! Look up miser in the dictionary and you’ll see my face. They have a homemade cinnamon roll that is quite delicious, and which we often split as our breakfast appetizer. As is typical for me, I always – ALWAYS – get the same thing, a breakfast called the Colorado Green Chili Stack. Hash browns covered with green chili and cheese, and topped with an egg made my way. Yum……

One of the things Bill likes most about a restaurant is when the staff gets to know you, and that is becoming true at The Little Kitchen. Last Sunday, Bill left me at the table awaiting our bill so that he could run to the Ace Hardware that is in the same little shopping center. The middle-aged waitress, who has taken a liking to Bill, told me that she was going to chase after him into the hardware store and tell him that the police car that had pulled up out front was for him because he had skipped out without paying the bill. And oh my, did she think that was funny. Bill has a way with women, no matter how many teeth they are missing.

When we come back after Christmas, things are a bit different and it is less like being on vacation and more like just having a home in a really nice place in which you don’t have to shovel snow.

Finally, after my blog post yesterday, Jen sent me this link to a video which puts our privilege of voting (as opposed to our civic DUTY) in perspective. Take a look and try not to cry….

They Like Me; They Really Like Me
I complain a fair amount about social media. It’s true I am wholly uninterested in reading about anybody’s political beliefs, no matter their party. I’ve gotten friend requests from people I’ve never heard of, but I simply ignore them, so no harm, no foul. Sorry if it’s from someone I should know, but I’m 62 years old and while I can remember my best friend’s phone number from nearly 50 years ago, I can’t remember the name of the people I met yesterday. But here’s something I DO like about social media. In the past few months, I have connected up via Facebook with some old friends from high school. They don’t post much, nor do I (except for my daily blog post), but I hear from some of them once in a while either on Facebook or my blog, and I simply LOVE that. After my post yesterday, one of those long-lost friends posted a comment in which he provided a tip that he thought might help me with my health issues. It seriously made me tear up. How nice to have friends from that long ago who care enough to take time to comment on my silly blog. Thanks to all of you who are paying attention to me still after all these years!

Hungry
After no food the day before and a process through which I cleared my digestive system fully in preparation for yesterday’s procedure, I woke up yesterday morning feeling tired and cranky. Even Bill noticed the difference. He’s used to the cranky part, but I’m generally well-rested. I told him I wasn’t quite sure what to expect following the appointment. But the good news is once the procedure was completed, I was given the go ahead to eat anything I wanted. We drove quickly to our favorite little breakfast spot – a family-owned café called The Little Kitchen — and got in under the gun for breakfast. Because I was breaking the fast. Get it?  I’m not sure when I’ve had a meal that tasted so good to me. I was unable to take anything by mouth yesterday morning prior to the procedure (which meant no food, no water, and NO COFFEE!). After breakfast, and three cups of coffee, I was a new woman. Well, not new, really, but the old woman that Bill is used to. Here’s proof that I enjoyed the breakfast…. 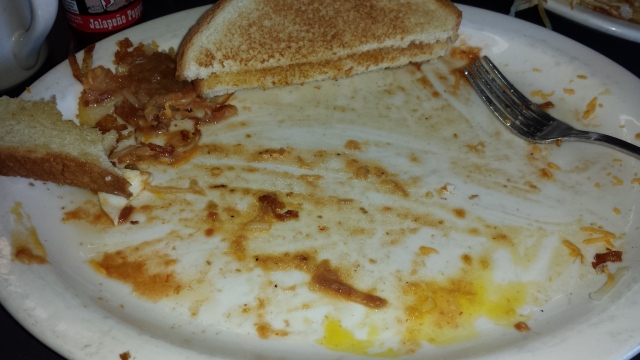 Would You Like to Buy Some Girl Scout Cookies?
That is how I’m greeted coming out of nearly every store I visit these days. The girls are always so adorable, but I am forced to explain to them that I have two granddaughters who are Girl Scouts, and if I bought my cookies from someone other than them, there would be hell to pay. As it is, I purchased five boxes of Girl Scout cookies from Kaiya and five boxes of Girl Scout cookies from Maggie Faith. Both girls either Face Timed me or telephoned me and gave me their pitch. Thanks to both mommies who took the time to send them to me. Now I am faced with the problem of having given up sweets for Lent. But never fear, they are being safely stored in the freezer until Easter Sunday when the Lord will rise and I can eat Girl Scout cookies. Well, except for the Thin Mints, which Bill has slowly and secretly devoured. No problem, because they are my least favorite. But has anyone tried the new Savanna Smiles? They are like crack, I’m telling you. I had a couple before Ash Wednesday, and they are irresistible. The good news? Bill wouldn’t touch a lemon cookie with a 10-foot pole, so they are all mine, mine, mine. After Easter, that is. A peek at my freezer…. 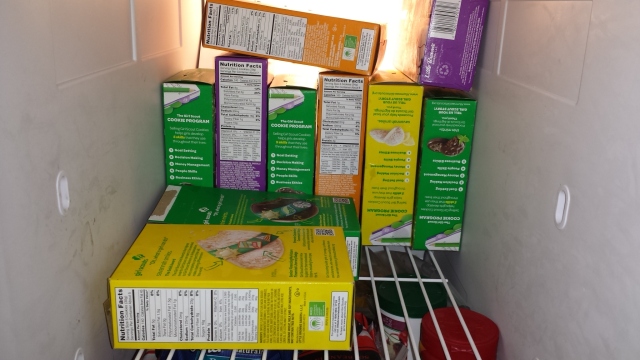 Speaking of Easter…..
I made a darling crocheted Easter basket that I am selling in my Etsy shop for a mere $15. Here are a couple of photos…. 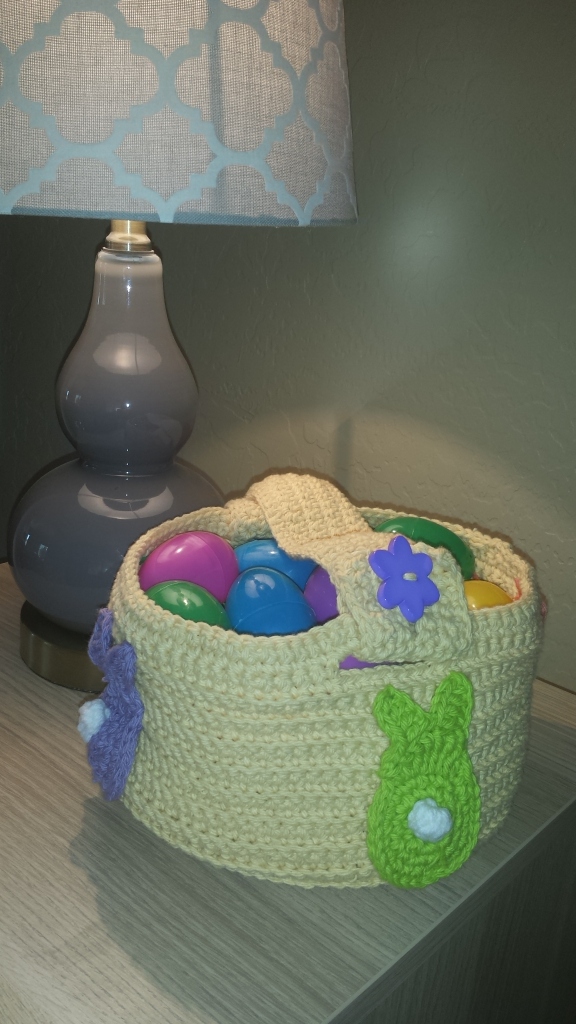 Remember to stop by my shop when you have a chance. It’s called Nanas Whimsies Shop (no apostrophe, which offends my writer’s sensibility, but I’m not King of Etsy), and here’s the link.