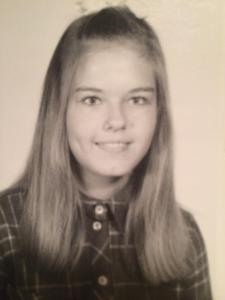 Aging is funny. In fact, aging is so funny that I’ve probably written this self-same blog post before and can’t remember doing it. So maybe aging isn’t all that funny.

But what’s interesting about it is how it sneaks up on a guy. It’s not like your body feels the same at age 63 as it does at 25. There are well-documented (and in my case, well-articulated) aches and pains that most people don’t have when they are 25 years old. But aging happens so slowly that it isn’t until you take one of those calculated looks in a mirror (you know, the ones where you’re really looking at yourself instead of just quickly checking out to see if you have spinach in your teeth) that you think, Holy shit! When did this happen?

Or when you see a friend or an old co-worker who is your age and whom you haven’t seen in a long time, and you can’t help but notice that they look OLD. And then you have to remind yourself that you also look old. It’s easy to tell because they are looking at you funny too.

And frankly, you also act old. I’m tentative about doing things that I did without a second thought when I was 25. Like watering my garden, which involves dragging hoses over rocks. I’m so fearful that I will trip on said hose and fall on said rocks. I didn’t worry about this when I was younger because, in the unlikely situation in which I should fall, it was easy to pick myself up and brush myself off and start all over again (and see, when you’re old, you start using lyrics of old songs when you write!). But now every fall can result in one of a couple of things: 1) you break a bone; or 2) you can’t get up. You know, as in I’ve fallen and I can’t get up.

I remember being horrified when I noticed that the Muzak music they were playing in the grocery stores was songs from my high school years. Now I don’t even recognize the songs they’re playing as Muzak background in grocery stores because it’s later than my time, and I see 40-somethings looking disgruntled because they’re hearing songs from their high school days. That’s when I yearn to hear Dan Fogelberg’s Another Auld Lang Syne or Take it Easy by the Eagles, both tried and true Muzak songs.

By the way, you non-Baby-Boomers probably don’t even know what I mean by Muzak. Look it up.

I started thinking about aging yesterday morning when I went onto my iPad to check what’s happening on Facebook. You know how now half of Facebook notices on your timeline aren’t from your friends, but instead are from companies trying to sell you things? For me, it used to be Zulilly or Amazon or maybe even Nordstrom. However, this morning, my ad was for underpants that are pee-proof (their words, not mine). Usually the ads are tied to something I might have googled recently or something I purchased. If I, for example, buy something from Target online, for the next six months, I get Target ads on my Facebook feed. But this pee-proof underwear comes out of nowhere. I’m happy to say that I haven’t peed my pants since I was two years old or so. I’m sure I will soon, but as yet, I haven’t. So why do they feel the need to nudge me towards pee-proof underwear?

And while I’m at it, I must tell you it is quite annoying that Pinterest keeps suggesting pins for plus-sized clothing. While I might be working my way there, I’m not there yet. Stop Pinterest, in the name of all that is good and holy!

My 45th high school reunion is coming up, and so I’m bracing myself to come face-to-face with reality. The good news is that we have had reunions every five years, and I haven’t missed a single one. So there shouldn’t be too many shocks.

Well, I’m a-standin’ on a corner in Winslow, Arizona
Such a fine sight to see.
It’s a girl, my Lord, in a flat-bed Ford
Slowin’ down to take a look at me.
Come on, baby, don’t say maybe.
I gotta know if your sweet love is gonna save me.
We may lose and we may win, though we will never be here again
So open up I’m climbin’ in, so take it easy. – The Eagles

After a big day of festivities with my family in Flagstaff, Bill and I took off early Sunday morning for the second leg of the trip. I’m pretty sure we are the only people who could stretch out a drive from Phoenix to Denver into three days. Hey! We’re retired and have time to take it easy.

And speaking of Take It Easy, since we weren’t in a particular hurry, we decided to actually visit some of the things that lie between Phoenix and Denver that we always say we’re going to visit but never actually do. This, despite the fact that we have driven past them in the neighborhood of 800 times.  And the reason I referred to Take It Easy is because one of those areas was Winslow, Arizona – such a fine sight to see. And one simply can’t visit Winslow without getting one’s picture taken beside its one and only tourist attraction – a statue of a man with a guitar standing on the corner of Winslow, Arizona.

My mother used to say that Holbrook, Arizona,  a bit east of Winslow on I-40, looks like a town that had been hit by a nuclear bomb. I think she was a bit harsh. I’ve eaten a number of road meals in Holbrook, and while it isn’t Aspen, it certainly isn’t post-Apocalyptic.

Instead, I believe Winslow, Arizona, holds that honor. Unless there is some part of town that isn’t visible to the casual traveler, it looks like Dodge City, Kansas, during the era of Gunsmoke (non-baby-boomers, look it up) but not that nice. Boarded up windows. KFC is the nicest restaurant in town. It is simply beyond me to know why Jackson Brown and Glenn Frey chose that particular town in which to be standing on the corner.

Nevertheless, one must await one’s turn to be photographed. The flowers are apparently in honor of Frey, who passed away this past January….. 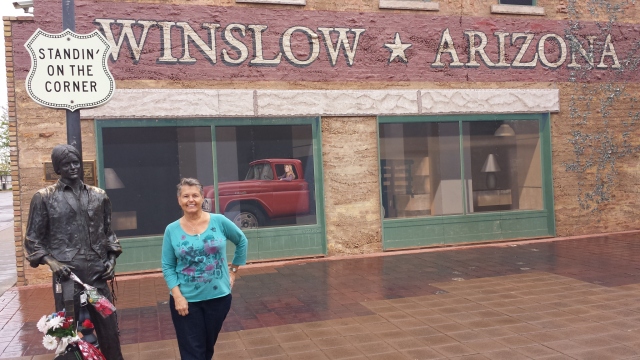 It wasn’t the only tourist attraction we saw that day. Our first stop, in fact, not too 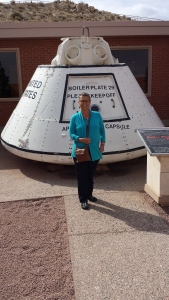 far out of Flagstaff, was to Meteor Crater – the location of an actual meteor impact some 50,000 years ago. Bill saw the crater site some time ago when he rode Route 66 on his motorcycle. He has been adamant that it is something I should see. I wasn’t particularly excited about it, but, as always, he was right.

The crater is one mile in diameter, and is actually quite astounding. There is a fairly new visitors’ center that provides all sorts of information about meteors. Meteor Crater in Arizona was used in preparation for the initial moon landing back in 1969. You remember: One small step for man; one giant leap for mankind – a quote that’s always bothered me because it sort of doesn’t make sense.  Anyhoo, here  some photos of Bill and I being tourists…. 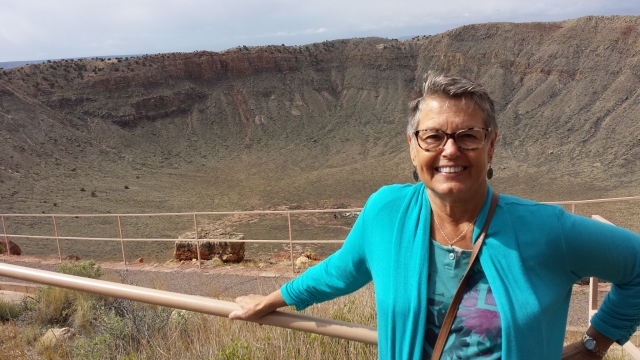 Our last stop in our so-called largest ball of twine tour of Arizona and New Mexico was to Glorieta Pass. Glorieta Pass was the location of a decisive battle in the Civil War in which the Confederate Army attempted to capture much of the Rocky Mountain west. Fortunately, the 1st Colorado Infantry stepped in, and, using a tricky maneuver that involved sneaking into the Confederates’ camp and stealing all of their food and killing all of their horses, managing to secure a defeat that ended in growling stomachs and sore feet from walking. To be perfectly honest, we were unable to find the historical marker honoring the battle, but at the end of the day, our car was sitting someplace very close to where the battle took place, and the Sangre de Cristo mountains are beautiful. It counted, my friends. It counted.

I am determined to not simply drive past some of these interesting historical markers in the future, as we will be undertaking an I-80 trip this summer. I-80 has more than its share of balls of twine.