Does this patio welcome dogs? – Person visiting Estes Park who presumed that everyone loves her dog as much as she does

I love dogs. I really do. In fact, for much of my life, I was a dog owner. Well, if an elementary-school-aged child can claim ownership of a dog. I imagine my parents, who paid for the dog, dog food and veterinarian visits would perhaps claim actual ownership. But you get my point. This is not an anti-dog blog post.

I just am amazed, however, at the number of dogs I see in stores and on restaurant patios. Perhaps my amazement is because the dog I owned most recently — who went to doggy heaven somewhere in the early 2000s – would have hated – HATED – going out and about with me, unless it was for a walk. Any time we got near the car, he presumed a trip to the vet was imminent. A doggy park? Fuggetaboutit. He simply didn’t like being around other dogs. They scared him. Perhaps that’s because he never realized that he was, in fact, a dog.

When I was probably somewhere in the neighborhood of 7 or 8 years old, my parents succumbed to their children’s pleas to get a dog. We ended up with an unlikely selection – a Toy Manchester terrier we named Geno (or maybe it was Jeano since it was female) who had so much energy that if she had run alongside someone in a marathon race, she would still want more exercise. Let me just tell you that none of us ran marathons. In fact, after the first few weeks, we lost most of our interest in the alarmingly annoying dog. She was killed by a car when she was still a puppy. I promise it wasn’t murder.

Not long after that we managed to convince our parents that we had seen the error of our ways and now we would be responsible dog owners. We got our second dog, a mutt we named MacArthur Douglas and called Mac. Mac was part of a litter that purported to be part poodle and part Scottish terrier. Mac might have been part poodle, but the closest he got to being a Scottish terrier was that his breeders may have been Scotch drinkers.  Here is a photo of Mac, albeit not a good one. In real life, he actually had eyes…… 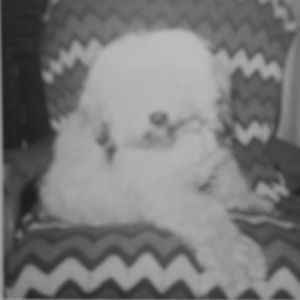 You can see that Mac would not have won any beauty contests, at least not as he got older. He was overweight and required regular grooming. But he was a good dog that lived to be a hearty old age and gave my parents company as their kids left home.

When Court and I bought our little house following my divorce, we did the first thing most homeowners do – we bought a dog. I had done a great deal of research and decided a miniature Schnauzer was our dog of choice. And it was a good decision. Fritz provided company, comfort, and many, many laughs. He was the dog who would have thought I was taking him to a dog park as punishment. He simply wanted to be at home with Court, and I was a palatable second choice….. 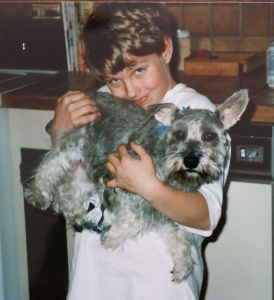 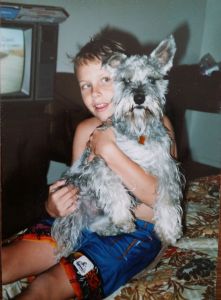 About the same time that we bought Fritz, Bill also bought a dog that he named Bear. We were not yet married, but the dogs spent time together both before and after we wed. Bear was the only other dog that Fritz could tolerate. Bear was a Rottweiler and German shepherd mix, and despite her size, she was the sweetest dog you could imagine. When we bought the dogs, they were roughly the same size…… 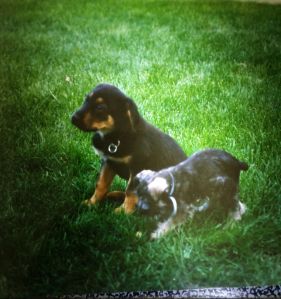 That changed, however, as Bear grew to be enormous and terribly sinister-looking. She wasn’t mean, but other people didn’t know that.

Both Bear and Fritz had to be sent to doggy heaven around the same time. Bill and I sort of thought we would eventually get another dog, but it has been a very long time and not likely to happen any time soon. We travel too much, and more importantly, the majority of our grandkids are allergic to dogs and cats.

Which brings me back to my original point. When did people start treating their dogs as if they were human beings? Again, I love dogs, but I don’t quite understand the logic around bringing them with you to breakfast. Perhaps this is just me aging into a crabby person. But here’s how far we’ve come….

Jen came to spend the night with us a few weeks ago, and she brought her dog Tucker along. Before arriving, they went through the drive-thru at our neighborhood Starbucks so that Jen could order her Pumpkin Spice Latte. The person at the window noticed Tucker and asked Jen, “Would you like a Puppicino for your dog?” I’m serious. I can’t make this stuff up. A Puppicino.

To be fair, Jen said yes, and Tucker enjoyed his Puppicino immensely. Next time, however, Tucker requested a skinny half-caf with a one pump and a splash of cream.