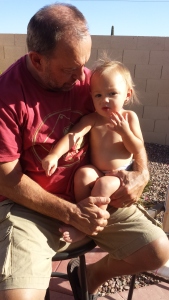 My brother is grown up now, shown here with his youngest grandbaby Kelsie. He would undoubtedly take a swing today.

Nebraska wasn’t big on baseball when I grew up. At least not Columbus, Nebraska. The only baseball games I attended when growing up in Columbus were those in which my brother played. For the record, during the course of his Little League baseball career, he didn’t take a single swing at a ball. Not one. I vividly recall my father BEGGING him to take a swing. We don’t care if you miss, my dad told him again and again. We don’t care if you strike out, he would add. Just take a swing. But here’s how my brother’s 6- or 7-year-old brain apparently rationalized his strategy. If I swing, I will likely strike out and humiliate myself. If I get on base via walks, I am fast enough that it is likely I will score. There you have it. It’s simple, really.

The Cactus League, of course, is located in Arizona. In fact, eight different communities in the Phoenix metro area have a baseball park devoted to one or two different teams from around the west and midwest. The teams include the Arizona Diamondbacks, the Chicago Cubs, the Chicago White Sox, the Cincinnati Reds, the Cleveland Indians, the Colorado Rockies, the Kansas City Royals, the LA Angels, the LA Dodgers, the Milwaukee Brewers, the Oakland A’s, the San Diego Padres, the San Francisco Giants, the Seattle Mariners, and the Texas Rangers. A few teams share a ball park – Arizona and Colorado, the White Sox and the Dodgers, the Indians and the Reds, and the Royals and the Rangers. The others have their own. As you can imagine, the teams and their followers provide quite a boost to the cities’ economies.

This year Bill and I attended the opening Cubs game at Sloan Park in Mesa. As you can imagine, the fans were in a downright FRENZY of ADORATION for their beloved Cubbies who came thiiiiiiis close to going to the World Series. The stadium was packed, and if you didn’t get your tickets weeks in advance (which we did), you were out of luck. I don’t even remember who won the game (or even who they played), but it was a lot of fun.

Yesterday we attended what will be one of the final spring games for the Colorado Rockies at Salt River Field in Scottsdale. They played the White Sox, and unlike the Cubs’ game, the stands were far from full. Having not attended another Rockies game this spring, I don’t know if that is typical, or if the fans have simply run out of steam. The weather was overcast and delightfully cool. But given the weather and the only halfway-full park, the beer venders were begging for sales. Even the man with the hat that makes it look like there’s an arrow going through his head and wearing peanut earrings was desperate to sell a beer or two.

I noticed that there were a variety of fans representing many teams in attendance. Of course there were Rockies and White Sox hats and shirts. I also saw a lot of people wearing shirts with Diamondbacks, Cubs, and Angels logos. And, of course, very many Giants hats and shirts. 2015 World Champions and all….

It is fun to see the kids before the game lined up by the fence looking for autographs. The

players yesterday were happy to oblige.

They were also happy to hit home runs too. In fact, I quit counting after a total of seven home runs. Three were hit by Rockies players, and they were one after another – three in a row. Imagine the pressure on the fourth man up. He handled it like my brother. He didn’t take a swing and managed a walk. That’s one way to beat the pressure.

Maybe 10 minutes before the National Anthem, I noticed some hubbub down on the field near the Rockies dugout. There was a man spraying what appeared to be bug spray into the corner near where the man who would sing the National Anthem would soon sit. The apparent bug-sprayer man seemed to be quite concerned, and several other Rockies officials also came to check out how things were going. I never was able to figure out what it was they were spraying, and frankly, don’t want to think about it too hard, it being the Arizona desert and all.

And Bill said to me after the game – as he does after every game – we should go to more baseball games this year.