I’m honestly beginning to think that the more prolific female fiction writers are starting to use plot templates that they got from a secret club to which they all belong, and they simply change the names, locales, and the precise situations to fit the template. What else could account for the oh-so-predictable story line of a busy contemporary professional woman running smack dab into the glass ceiling despite working harder than any man, and then finding out about a family secret that changes their life, while meeting the love of her life in the meantime? What follows is the inevitable back and forth between a character from the late 19th or early 20th century to a more contemporary heroine. It is starting to get so tiresome, and authors are starting to seem so lazy.

I’m afraid that my boredom with this plot technique colored my opinion of The Ashford Affair by Lauren Willig. Willig is actually a good writer, so it is a disappointment to see her fall into this same trap. The Ashford Affair’s only saving grace – at least as far as this reader is concerned – is that some of the story takes place in Kenya which made the plot more interesting. The earlier time period is the early 1920s, and I happen to find this period in world history quite interesting.

Clementine Evans has worked her tail off pursuing her dream of making partner in the law firm in which she works in 1999. Unfortunately, her elderly grandmother Addie – who loved Clemmie very much and helped her deal with a disapproving mother – takes a turn for the worse, and is dying. Before she dies, Clemmie becomes aware of a secret that could change everything she knew about her family.

Flashback: Addie’s mother and father are killed when she is 5, and Addie is sent to live with a cold and uncaring aunt and uncle in England. Addie’s only friend is her cousin Bea, who, though only 7, is beautiful and already being groomed to marry well. The two become dear friends until they are grown up and Bea betrays Addie by stealing her boyfriend and marrying him.

Flash forward: When Clemmie’s grandmother dies, she goes to the funeral instead of a meeting she was expected to attend, and is turned down for partnership. Shock. So she and a distant cousin with whom she once had a fling decide to try and solve the mystery of their family’s background.

What follows is a predictable, if well-written, story that was a good enough read to keep me marginally engaged but predictable enough to make me work to try and keep from getting confused with other novels I’ve read.

I can’t unequivocally recommend the book unless you are in the mood for something that won’t require a lot of thinking.

My sister Bec recently returned from a trip-of-a-lifetime, a safari to Tanzania and Kenya in Africa. Today, and for the next three Wednesdays, she will tell you about her exciting trip.

For a long time, one of my travel goals was to visit Africa to view the wildlife there.  A few years ago, my husband and I started some serious planning for such a trip, but life happened and the trip did not.  About a year ago, I wondered if I was ready to try it again.  I asked my daughter if she would be interested in going, and she gave me a resounding Yes!  And so, the planning began again. 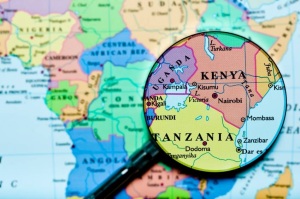 I did a little research and decided that Tanzania was where I wanted to go, and I hoped to visit another country as well.  I ended up choosing Kenya, mostly because it borders Tanzania and because most everyone I know who has been to Africa has been to Kenya.

To be honest, the planning was somewhat overwhelming.  There are so many things to consider.  For instance, it take over 24 hours to get to Eastern Africa from the west coast, so it seemed like we should be in Africa for at least 10 days to make the traveling worthwhile.  How and where to spend those 10 days?  I left a lot of that up to our excellent travel company, and was happy with what our agent came up with.  Once we had our itinerary in place, there was still lots of preparation.

I knew I would need some immunizations, so I looked on-line to get an idea of what that would involve.  A lot, apparently.  A trip to my primary care doctor was really helpful.  She took the time to research the areas we would be visiting and helped me to identify the required immunizations and to determine which of the optional ones I should get.  I did what I could in that office and then made another several trips to a travel clinic.  I was so impressed with the travel nurse.  She walked me through the immunization process, discussed insect repellent and sunscreen needs, and advised me to take an antibiotic along, just in case.  In my daughter’s case, her travel clinic actually prepared a personalized, bound document for her, describing the areas we would visit, their customs, and other pertinent information.  Note to self:  Travel clinics are awesome!

Another big question was what to pack.  I read the information sent by the travel company and verified that we were, indeed, limited to a maximum of 33 pounds, including both checked and carry-on bags.  And, said bags needed to be completely soft…no hard shells, or even wheels.  Yikes!  Everyone I spoke to and everything I read said that 2-3 outfits would be sufficient, and that it wasn’t necessary to buy special “safari” clothing.  Fortunately, however, I already owned two safari-type shirts and a pair of safari pants.  To those I added enough clothes to have a total (including what I wore) of three outfits, plus a somewhat nicer shirt for dinners.  I was advised that mornings and evenings might be cool, so I added a sweater.  The only things I purchased specifically for the trip were a pair of slip-on sneakers and a multi-pocket vest, both of which I wore the entire trip.

Of course, I didn’t just take clothes.  I brought a good pair of binoculars, a wildlife book, first-aid articles, medications, a flashlight, sunscreen, insect repellent, voltage adapters, chargers, etc.  It doesn’t sound like much, but it seemed like my suitcase was much bigger, bulkier, and heavier than my daughter’s.  And I never did figure out why.  I will say, though, that I did a good job.  There were only a couple of things I didn’t use or wear, and I feel like they were still sensible to take along.

And then there were those issues I worried about but couldn’t really prepare for.  The journey to Africa was daunting to me.  From Phoenix, I would fly to Detroit, change planes, fly to Amsterdam, change planes, and finally fly to Kilimanjaro in Tanzania.  My daughter was coming from L.A.; we would meet in Amsterdam and fly together from there.  But, what if one of the planes was late and we didn’t connect with each other?  How would we communicate?  How/when would the one left behind get to Tanzania?  Well, those problems couldn’t be solved until, well, they were actually problems.  But, we made “what-if “plans about how to communicate with each other and the travel company if anything went wrong.

Before I knew it, I was on my way to the airport, ready to start my journey.  I was often asked what I expected from the trip.  My honest answer was, “I don’t have any idea.”  Obviously, I hoped for good wildlife viewing; I had chosen a time that had the potential for it.  But, no one, not even the best guide, can guarantee that the animals will be around.  So, I hoped to see the “Big 5” but didn’t count on it.  Other than that, I had no idea what to expect.  Would it really be that impressive to see lions or elephants or giraffes in their natural habitat?  What does Tanzania look like?  Would we get a sense of the culture or would we be too programmed and isolated for that to happen?  What would it be like to spend a week with one driver/guide in an open truck?  What does the term “luxury hotel” mean in Tanzania?

When I got on the plane in Phoenix, I literally took a deep breath and stepped into the biggest adventure of my life.