Every year around this time, you start hearing the stories about people going through the Starbucks drive-thru only to learn that the person in the car ahead of them paid for their coffee drink. Or there are the stories of the Santas ringing the bell at your friendly neighborhood grocery store in Podunk, North Dakota, who discover at the end of the day that some anonymous person put a five hundred dollar bill in their red kettle. The former has never happened to me (at least in part because I rarely go to Starbucks, inside or out), and I’ve never done the latter because I’ve never even seen a five hundred dollar bill. Do they make them? Lord knows the bank teller whom I encountered Monday (you know, the one who wanted me to pay $500 for five $50 bills) wouldn’t know the answer to that question.

I love stories of nice things that strangers do for one another, especially this time of year, and especially since we all seem so angry with one another these days if we are to believe social media.

Night before last, I did have the opportunity to be a Good Samaritan. Bill and I ate dinner at our favorite neighborhood pizza place. At the end of our meal, the server brought over our bill. I was getting ready to place my credit card on the tray and a man who had been sitting on the other side of the restaurant (I had noticed him simply because at one point he had his head rested on the table and appeared to be sleeping) walked over to our table. Would you be willing to pay for my dinner, he asked me. I glanced down at his bill, which was a measly $3.75 for a slice of pepperoni pizza. That would be a BIG FAT YES, no questions asked. He thanked us graciously and left. When the server came to pick up my credit card, I told her I was paying another man’s bill as well. I finally got a chance to be a blessing to someone.

This time of year makes me especially sad for people without shelter or friends/family. The weather has been nice, but Thursday it’s supposed to drop into highs in the low ‘teens. I hope he’s safe. Our neighborhood seems far away from homeless shelters.

Yesterday afternoon Bill and I went to Costco. As we were driving home, we stopped at a red light. Suddenly we noticed that a man in the car next to us was madly waving his hands at us. Bill rolled down his window. The man told us that one of the brake lights on my car was out. I don’t want you to get a ticket, he told us. Wasn’t that nice? All the rest of the way home, I worried that a police officer was going to pull me over to tell me my brake light was out, and then, having seen too many episodes of COPS (Bad boys bad boys, watcha gonna do? Whatcha gonna do when they come for you?) I was sure I would end up with my hands against the car as Bill took off running with a police officer and his German shepherd chasing him. The reality is that brake light has probably been out for two weeks.

A couple of weeks ago, I was at a grocery store – not my usual store. As I got out of the car, I noticed three or four gift cards on the ground, still on their cardboard holders. I didn’t know the story of the cards, of course, but it seemed a logical possibility that someone had bought a number of cards to give as Christmas gifts, and accidentally dropped them as they were getting into the car. So I picked them up and took them into the store with me. I stood in line for customer service. When it was my turn, I gave the cashier the cards and told him I had found them in the parking lot. The cashier looked at me so blankly I thought perhaps English wasn’t his first language. I explained that perhaps someone had dropped the cards and would return to the store to see if they had been turned in. Well, okay, he said to me somewhat reluctantly. I don’t know what happened to the cards, but the story I’m creating in my own mind is that an elderly woman who had purchased gift cards for her grandkids came back to the store, assuming the worse, only to find that thanks to some human kindness, there they were! Hey, it’s possible.

Without a doubt, the nicest thing I did yesterday was make Bill his favorite fried chicken for dinner….. 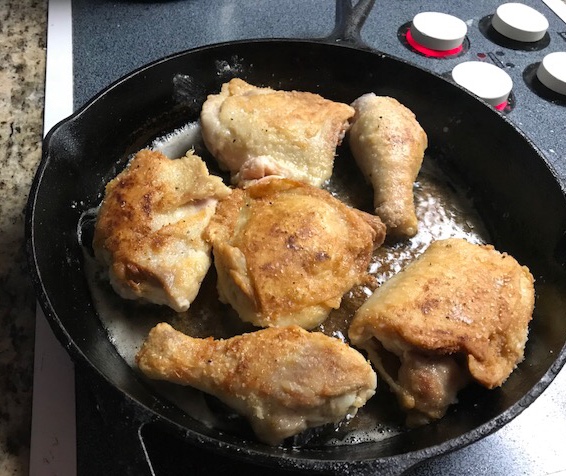 Hold the door say please say thank you
Don’t steal, don’t cheat, and don’t lie
I know you got mountains to climb but
Always stay humble and kind.

…..and the instruction that Jesus gave us…

Love your neighbor as yourself. Matthew 12:39