I wonder how many times I’ve driven I-76 and I-80 between Denver and Columbus, Nebraska? Hundreds, probably, or close thereto. I seriously never get tired of it. Well, I don’t get tired of I-80 anyway; I have to admit that I-76 running through the eastern plains of Colorado is a bit of a snoozer. While I don’t want to lapse into hyperbole, there is virtually nothing on I-76.

In fact, one time many moons ago, Bill and I were driving back from Chicago in the middle of the night. We incorrectly assumed we could find a place to get gas along I-76; however, there were absolutely no gas stations open and paying at the pump was nonexistent. Anyhoo, by time we got to Keensburg (about 48 miles northeast of Denver), Bill insisted that we go no further since our gas gauge was hovering on empty. We slept in the car at the gas station until 6 o’clock or so, when someone finally opened up the station and turned on the coffee pot.

We made the trip this past weekend so that I could attend my 45th high school class reunion. Seven hours up on Friday and seven hours back to Denver on Sunday. Quick trip, but well worth it.

I never really entirely forget just what growing up in the Midwest was like and how it shaped who I am. However, when I am away from my Nebraska roots – either in Denver or in AZ – I give little thought to how much rain we’re getting or the price of soybeans. I worry instead about what color we will stain our hardwood and what I will make for dinner.

But the instant I drive over the Loup River bridge into Columbus, I’m 12 years old again. I find it funny that it always feels like I’m coming home, though I lived in Columbus a mere 18 years, and have lived in Colorado over twice as long.

The first thing I always notice is the sound of the train whistles. Columbus is a major thoroughfare for the Union Pacific railroad. The sound of the train whistles is heard regularly throughout the day and night as the trains – barely slowing down – go through the center of town and on to their next stop. When you live in Columbus, you get used to the sound of the whistles. Though our house was maybe half a mile from the tracks, I had many aunts and uncles who lived so close you would think the train was going to blast through their living room. Bill and I stayed at one of these houses when we were first married. In the middle of the night, Bill rolled over and said, “I have never heard so many trains in my life.” I had barely noticed……

To this day, the sound of a train whistle in the distance makes me nostalgic.

We ate dinner at Husker House Restaurant, about which I’ve spoken before. HH is the restaurant at which our family celebrated nearly every important event in our life until we moved to Colorado. The food is good and the décor hasn’t changed a single bit since I was a child….. 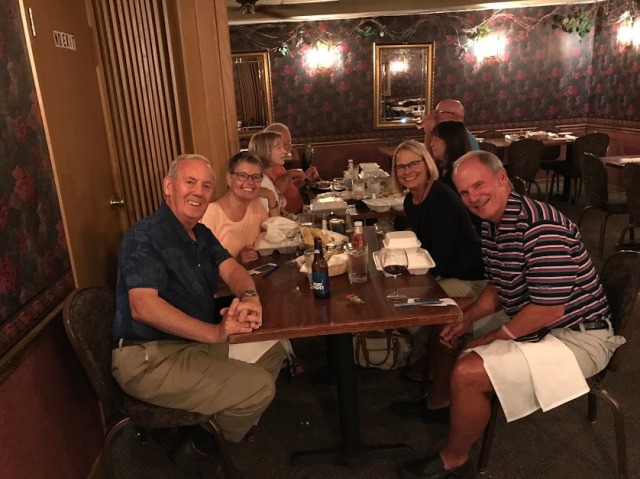 Bill and I had dinner with my friend Susie and her husband Sean.

Bill’s happy if he can stop at Glur’s Tavern (which proclaims to be the oldest tavern in Nebraska, and who am I to doubt?) and have a burger…..

I find a stop necessary at Ole’s Big Game Bar (in Paxton, NE), where you see the mostly-endangered-species that have been part of their décor since the species were not endangered….. 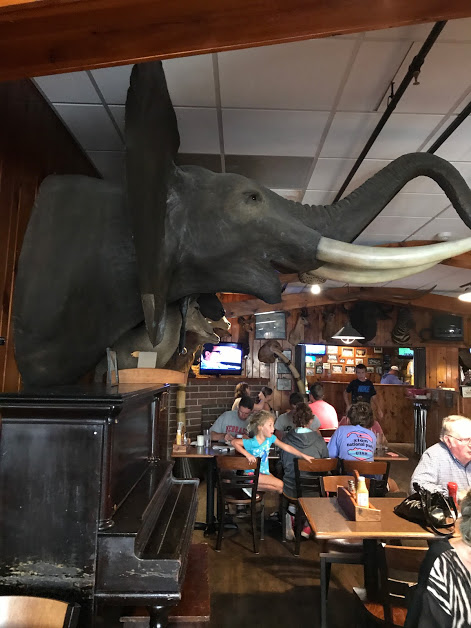 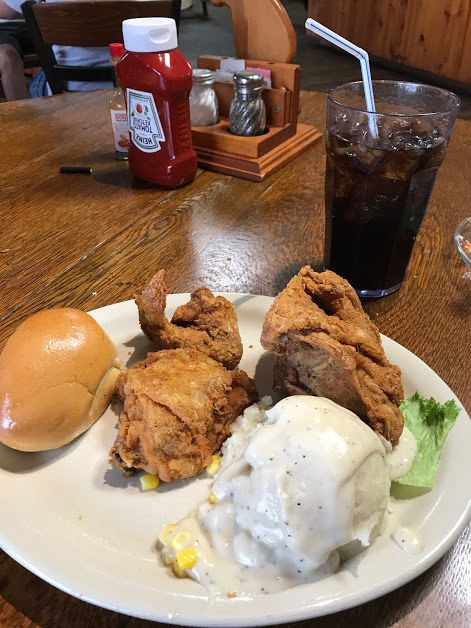 But perhaps the most notable thing when I make my trip back to Nebraska is just how absolutely down to earth and funny and kind and interesting (and interestED) the people are. Most would agree with Tim McGraw that you should always be humble and kind.

I’m not sure when I’ll get back next, but I’m pretty sure things won’t have changed much. That’s something you can count on. There might be fast food restaurants that weren’t there when I was a kid, but at the end of the day, Nebraskans are still Nebraskans…..

In the town in which I grew up, the railroad tracks divided Columbus into two areas — the north side of the tracks and the south side of the tracks.  It wasn’t any kind of a formal division. Streets didn’t become avenues; street names didn’t change from North Whatever to South Whatever; there was no West Side Story or Hatfields and McCoys. The railroad tracks simply went all the way through the town, and trains passed through Columbus, dividing the town into two, about every 10 or 15 minutes, or at least that’s how it seemed. There was only one viaduct, so residents either drove out of their way to cross the tracks on the lone viaduct west of downtown or waited for the long train to makes its way past your street.

The Miceks — my family — lived on the south side of the tracks. And many proudly lived – at least for a period of a few years back in the post-WWII days when Baby Boomers were just out of diapers – within spitting distance of one another.

I learned about what I – and I, alone – call Micekville at the family reunion. Oh, I vaguely recalled that my mom and dad rented a house across from Grandpa Micek when Bec was a toddler and before I was born. By the time I came along, Dad and Mom had built their own home a full 10 blocks or so away, across the tracks. And I, of course, was also aware that my mom’s brothers Elmer and Leonard (along with their families) still lived near each other in the area just south of the railroad tracks even when Mom and Dad sold their business and their house and dropped anchor in Leadville, Colorado.

But I never knew that there was a point in time when my Grandpa Micek, then a widower, took in my mom’s sister Anne who had recently been widowed herself after a bolt of lightning killed her farmer husband, leaving her to raise five children on her own. Along with Anne and her children, my mom’s bachelor brother Ray moved into that same house across the street from where my folks lived. Just down the street, Leonard and Elmer had their homes, as did my mother’s brothers Bob and Ted and their families.

See what I mean? Micekville.

And just for good measure, my dad’s parents had a home just a stone’s throw from there. It was a village.

Eventually, two of my uncles moved their families not just out of Micekville, but out of Columbus altogether. Anne’s kids grew up and she and Ray moved near our home, as did my aunt and uncle, always called Cork and Jeep. It might have been on the north side, but the reality is that it was only a short bike ride away.

I’m happy to say the men standing in front of Glur’s aren’t my relatives. At least I don’t think so….

Columbus’ original downtown was on 11th street, just south of the railroad tracks. At some point the downtown moved two blocks north to 13th street, which is where my folks had their bakery. After that change, 11th Street consisted mostly of bars or somewhat lonely businesses. But one of the businesses that wasn’t lonely was Glur’s Tavern. (Interesting article here.) Supposedly the oldest continuously-running tavern east of the Mississippi, it was just a hop and a skip from Micekville. Stop in any afternoon or evening, and you wouldn’t be surprised to see one Micek or another at the bar sipping a beer or a pop. Bec recalls the Micek clan gathering some evenings in Glur’s beer garden where she and her cousins would run and play, drink root beer and eat popcorn while the parents yakked. By time I came along, the beer garden wasn’t part of my parents’ leisure activities because they had a business to run. But I have vivid memories of walking hand-in-hand with my grandmother (who by that time lived in an apartment above the bakery) to Glur’s Tavern to get a strawberry ice cream cone. Always strawberry. And we inevitably had to wait for a train before we could cross the tracks to get to Glur’s. That was okay because we got to wave goodbye to the cabooseman. He always waved back.

The day after the reunion, Bill, Bec, Jen and I decided we wanted to stop at Glur’s Tavern to see if it had changed (it hadn’t, not even the towel in the bathroom) and to maybe have a burger and a pop. We walked into the door, and Glur’s was nearly empty except for one large group sitting in the middle of the room where several tables had been pushed together.

Guess who it was? Miceks. Billions and billions of Miceks. (Well, not really, but it almost seems like, doesn’t it?…..)

Sometimes, things don’t change as much as you think.