Well, the Lord is risen, so I baked a ham.

I always kind of wonder how certain foods become synonymous with certain holidays. I understand how lamb became traditional food at this time of year – you know, Passover and all. But ham? I guess I should just thank my lucky stars that we don’t have the Easter Pig visit us each year.

It’s bad enough that there’s an Easter bunny. As my niece Maggie put it the other day, Easter is kind of a silly holiday unless you are a church-goer, or at least a believer. Oh, I know, I know, Easter is based on pagan rituals. But there really is no way around it. Easter is the celebration of the resurrection of Christ.

So really, the Easter Bunny is just another way to get consumers to buy more stuff for our kids – stuff they almost never need.

When I was a kid, we didn’t get Easter presents. We got Easter eggs and chocolate candy. Period. At our house the bunny came during the night and hid our entire basket full of the eggs we had dyed the day before. Not the individual eggs; the whole basket. It took some creative thinking on mom’s – oops, I mean the Easter bunny’s — part. One year my basket was in the clothes dryer downstairs. It took quite some time to find it.

But back to ham for a minute. I like ham, but I don’t love ham. I would never, for example, order a ham sandwich if I went out for lunch. Oh, capicola and provolone sandwich, for sure. Bacon, lettuce, and tomato, you betcha. Italian sausage sub, no brainer. But not a ham sandwich.

And yet, the one time a year that I bake a ham, it tastes so good to me. And then, of course, there are the leftover meals. Ham and navy bean soup. Green beans with ham. But don’t even suggest HAM SALAD. Yuck. Ham should not be a salad. Tuna should be a salad. Eggs should be a salad. Not ham.

To celebrate the risen Lord, Bill and I went to the sunrise Mass at our church – 6 a.m., necessitating a 5 o’clock wake-up call. The church was surprisingly full.

And then we came home and I began my preparation for our Easter celebration, featuring the ham. Each year I make the ham and, some kind of breakfast sausage casserole.

This year I added a bonus. We stopped earlier this week and got tamales – some green chile and some pork – from Old El Paso Tamale Shop in west Mesa. They make some of the best tamales in the East Valley.

We had a houseful as we do each Easter. They come in waves. The early birds were my niece Maggie, her husband Mark, and Austin and Lilly, DECKED OUT for Easter… 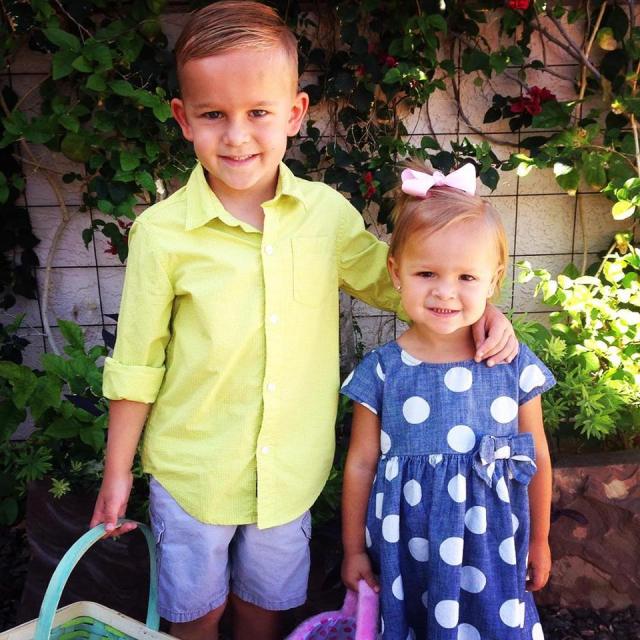 Bec showed up soon after with her offerings of coffee cake and chocolate cake. We all toasted the Easter bunny with mimosas! Nothing says alleluia quite like orange juice and champagne. And, by the way, this was no simple chocolate cake…..

Next my brother rolled in, bearing gifts of freshly made donuts and Parker rolls so fresh they were still warm. Nothing says alleluia quite like freshly baked bread. He was followed shortly after by his daughter Brooke.

Later that afternoon, Bec’s son Erik, his wife Josey, and kids Mackenzie and Carter arrived, their second fete of the day. And finally, Dave’s daughter Kacy and her three daughters completed the group.

We set up the little splash pool and the kids had as much fun as if it was a regular Olympic-sized swimming pool. Lots of splashing going on….

We had a wonderful day, and what was left over of the ham went home in many takeaway bags. There will be lots of soup cooking this week in Arizona. Ham and green beans is on my menu.