I own a ridiculous number of cookbooks – ridiculous because I actually use a total of exactly two. Well, perhaps technically more than two. I tend to lump all of my Lidia Bastianich cookbooks into one. If I cook one of her recipes, I use the actual cookbook. Of her cookbooks, the one I use far and away the most is Lidia’s Italian American Kitchen. It has the tomato sauce stains to prove it. 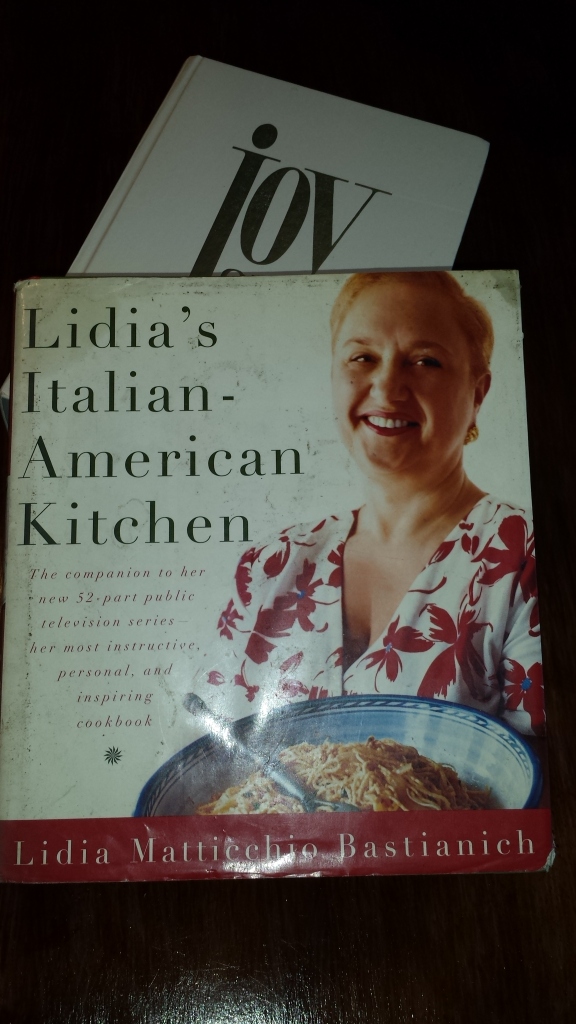 The other cookbook I open occasionally is my beloved Joy of Cooking cookbook that belonged to my mother-in-law who gifted it to me a number of years ago. It’s beloved simply because it’s from her. I can’t say I use it often. Joy of Cooking is a classic cookbook from which you can get recipes for practically anything. For heaven’s sake, it even tells me how to dress a deer (and I don’t mean in camouflage shirt and pants, ar ar ar). Needless to say, I haven’t actually had the need to hang a dead deer from my back porch because Bill doesn’t hunt, thank goodness. I’m not anti-hunting, mind you. Just anti-dressing-a-deer and anti-plucking-a-goose-or-wild-turkey. At any rate, Wilma’s Joy of Cooking was well-used by her, and looks much like my Lidia’s Italian American Kitchen.

I was thinking about this the other day as I was searching all of my various spots for a particular recipe. It’s a pasta salad that I make often but have never memorized. I have it somewhere, but I can never remember where. Since the pasta salad originated with my sister Bec, I generally email her and ask her to send me the recipe.

However, when I made the salad recently, I googled the recipe. It isn’t an easy one to find, as it comes from the Crème de Colorado Cookbook (one of Colorado Junior League’s cookbooks) which isn’t online. But I put in “tortellini salad havarti salami” and eventually found it on the Better Homes and Gardens website. I don’t know if BHG stole it from the Junior League or if Junior League stole it from BHG. I envision both groups comprised of women wearing pillbox hats and white gloves and not stealing, so your guess is as good as mine.

All this is to say – perhaps randomly – that I love Pinterest. I wish I had invented Pinterest. First, and foremost, because I would likely be a millionaire. Then I wouldn’t have to worry about looking for recipes because I would have a professional chef on my staff. But second, because I would be so proud of myself for having had such a good idea.

I rarely use cookbooks anymore (see above), but that isn’t to say that I don’t use recipes. Oh my, yes I do. I couldn’t cook without a recipe. I’m not one of those. My siblings all cook without recipes. Me, I need to have someone telling me what ingredients are necessary and how much of each. Having two homes makes keeping track of my recipes somewhat difficult. As it is, I haul many of them back and forth – mostly those that were my mom’s recipe cards. But more and more, I’m able to find the recipes online and “pin” them to my Pinterest page. That way I have access to my recipes wherever I am as long as I have internet access, and I know where to find them.

I used to religiously peruse Pinterest and pin recipes, decorating ideas, crocheting patterns, and other things that are important in my life. I still occasionally will log onto Pinterest and pin one thing or another. But mostly I use it as a giant high tech recipe box. That alone makes it worth what I pay for Pinterest (which, of course, is nothing).

By the way, here is the recipe for the Havarti Tortellini Salad. It is so good that even Addie’s 13-year-old friends ask for the recipe…..

If making more than 3 hours ahead, reserve half the dressing and toss with salad just before serving.