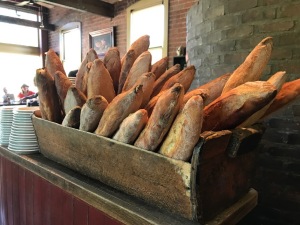 My father was a wonderful baker. Have I mentioned that? His doughnuts were so light that you would think they might float away. His Danish rolls were sweet and delicious. He made outstanding cakes and pies. But what people came from far and wide to purchase was his bread. He made different kinds of bread – rye, wheat, cottage, and French. But his best-selling (and frankly, best tasting) bread was his plain white bread.

Every night except Saturdays (because the bakery was closed on Sundays) he would drive down to the bakery to “set sponge.” That meant he would mix the flour and the yeast and the salt and whatever else, mix it in the giant mixer, then dump the sponge dough into a big trough where it would rise over night. The next day, it was ready to shape, proof again, and then bake. It sold for 29 cents a loaf. Imagine that.

I think about my dad’s bread a lot, mostly because I simply haven’t been successful yet with my bread baking. And it came to mind again Sunday because the gospel this weekend was the first of a few weeks of St. John’s so-called Bread of Life discourse.  The interpretation of this part of St. John’s gospel is one of the biggest differences between Catholics and Protestants. Catholics believe that when Jesus said this is my body and this is my blood, he was speaking literally, while Protestants believe he was speaking metaphorically. I’m not going to attempt to change anyone’s minds, although I will tell you that these upcoming gospel readings are some of my favorite. After all, that’s what the Catholic Mass is all about – the Eucharist.

St. John starts off the discourse with the story of the loaves and the fishes. In John’s version, it is Jesus who hands people their bread and fish, enough to feed them all with plenty left over. And when he saw that the crowd was so awe-struck with his miracle that they would immediately try to make him king, he went scurrying. He didn’t want to be their king. He wanted to offer them the bread of life.

When I was a little girl, the nuns at my elementary school always told us to listen for God’s call to the religious life, that is, being a priest or nun. I clearly remember going to bed at night and being terrified that I would hear God calling me to be a nun. I needn’t have worried because I’m not cut out for the sisterhood and he, of course, full-out knew that. Still, it demonstrates that my unwillingness to listen to what God wants from me started a long time ago.

As I ponder this reality, it occurs to me that God doesn’t actually need a single thing from me. He’s perfect. But he asks things of me to make me a better person and to make my life and the lives of those around me better.

As always, it just comes down to opening myself up enough to listen to him speak to me.

Then Jesus declared, “I am the bread of life. Whoever comes to me will never go hungry, and whoever believes in me will never be thirsty. – John 6:35

For the past few weeks, the Catholic church took a break from the allegedly written-on-a-deadline Gospel of St. Mark to hear St. John’s discourse on the bread of life. Our gospel reading concluded at yesterday’s Mass, and I must admit the final part of that section of John’s gospel gives me a great deal of peace.

I’m going out on a limb with today’s blog post because it is not my goal to alienate any of my readers. I respect all of the different ways that people worship God. Still, Catholic Christians are very often belittled by other Christian faiths for our beliefs, and it seems like yesterday’s reading from John’s gospel provides some background on one of our most important teachings.

In his homily our pastor pointed out that Jesus tells his friends “I am the bread of life; whoever comes to me will never hunger, and whoever believes in me will never thirst…..Whoever eats my flesh and drinks my blood has eternal life, and I will raise him on the last day. For my flesh is true food and my blood is true drink.”

In yesterday’s conclusion of the discourse on the bread of life, Jesus asks the people, “Does this shock you? The words I have spoken to you are spirit and life. But there are some of you who do not believe.”

And it was true, because at that point a number of his followers stormed off in disgust. And, as our pastor pointed out, Jesus did nothing to try and dissuade them from leaving. He clearly did not say anything like, “Come back friends. I am not speaking literally. Everything I’ve just said is symbolic.” Instead, he let them leave. He turned to his closest friends and asked them, “Do you also want to leave?” They assured him that they were there until the bitter end because, as Peter said, “You have the words of eternal life.”

It doesn’t shock me that people have trouble believing that the bread and wine in which we partake every Sunday at Mass is the living body and blood of Christ. That concept is beyond our understanding. In fact, many Catholics, including those partaking in Holy Communion each Sunday, struggle with this idea. What really is surprising when you think about it is that even people like me who believe in our church’s teaching on transubstantiation take it so for granted. If my feeble little brain could really understand this mystery that our church teaches, at each Mass when the priest holds up the host and the wine, I should literally be falling to a prone position as the living God is raised before me. Instead, I pay attention as the priest blesses the bread and wine, and then my mind might wander to what time the Broncos are playing.

No matter what you believe about Holy Communion, it is comforting to know that God cares for us as he did the Israelites in the desert when he fed them with manna.

As an aside, yesterday’s conclusion to St. John’s bread of life discourse was accompanied by that ever-popular letter of St. Paul in which he tells women to submit to their husbands. For the most part, homilists avoid that one like the plague. Oh Paul. The good news is that it was offset by the beautiful words from the Old Testament Book of Joshua in which Joshua tells the Israelites, “If it does not please you to serve the Lord, decide today whom you will serve……As for me and my household, we will serve the Lord.

So, as for me and my family, we will serve the Lord. Amen. Alleluia.