Austin and Lilly joined me for a picnic and enjoyed the beautiful weather.

I spend more time than I should complaining about getting behind a snow bird going 30 miles per hour when the speed limit is 45 or how snow birds double park their grocery carts in the middle of the aisle or that snow birds ram their carts into the back of your ankle at Costco.

All of the above are true.

However, yesterday I had a full appreciation for those of us who make up a large part of the population of the Valley of the Sun from December through May. For these past few days, the weather in the Phoenix area has been nothing short of spectacular, and you can feel the appreciation from everyone. But I must say I am noticing that Mesa area Baby Boomers – who largely come from Minnesota or Iowa or Illinois or North Dakota or Alberta or, ahem, Colorado – all currently facing snowfalls of anywhere from inches to feet – are the happiest of all.

Bill, who was making one of his many trips to Home Depot yesterday morning, dropped me off at nearby Red Mountain Park so that I could walk a couple of miles instead of following him around Home Depot and twiddling my thumbs while he decides which screws he needs from the 75,860 screw choices.

The walking path goes around the perimeter of the park, a total of nearly a mile each time around. During my three loops around the park, I passed Baby Boomers walking their mostly fat dogs, I saw husbands and wives holding hands as they strolled along. I saw men sitting in canvas folding chairs down by the lake, fishing for crappies that they toss back into the water after reeling them in.

I saw a group of six or seven men, all around the age of 70, happily riding their bicycles, and it occurred to me that these folks have worked hard for 50 years or so to reach this goal of enjoying sunshine instead of scraping ice off of their car windows or shoveling snow until there is nowhere else to shovel it. And now they simply enjoy it.

I went to the grocery store yesterday afternoon, and the man who bagged my groceries was older, likely retired but still looking for an income of sorts which he gets by bagging groceries.

With a big grin, he asked me if I ever fill out the Kroger surveys.

I admitted that I didn’t. “Oh my, he said, “you need to start doing that. You get 50 fuel points each time you fill out a survey, and you can fill out a survey every 7 days. That adds up to something like $250 a year in gas savings.”

I loved that he had my back.

“And if you mention me, I can get a sticker that I put on my name tag,” he added. “The name’s Dave, and I’m from the south side of Chicago.”

After we determined that he grew up not far from my husband, I went on my way, pledging to fill out the survey.

As I neared my car, pushing one of those coveted small carts, an older couple spotted the cart. “You can get it from her,” I heard the woman whisper to her husband.

In the thickest Scottish brogue, the man walked over to me and said (and I’m not making this up), “Ah, Lassie, if I load the groceries into your car, can I take the cart?”

I told him that would be fine, and said, “You’re from Scotland, aren’t you?”

Well, it doesn’t really take a rocket scientist, I thought. But I said, “My last name’s McLain.” But, as their faces lit up, I felt compelled to provide truth in advertising. “But I’m afraid I married the name. I’m Swiss and Polish.”

They forgave me because I gave them my cart.

By the way, while others are picnicking or bicycle riding or taking romantic strolls in the park, Bill is working on yet another home project, this one involving cutting stone…. 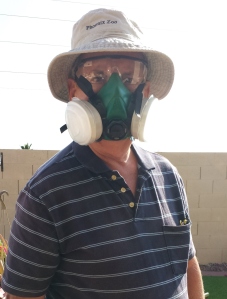 To each his own.

It’s been good to be a resident of the Valley of the Sun these past few days. Now I have to go fill out a survey. I promised Dave.