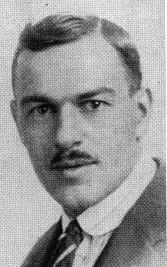 My Grandpa Gloor was a quiet man. When I was a kid, he seemed stern but not mean. He was very handsome, with dark hair and blue eyes, and he had a mustache. I never saw him clean shaven. He worked hard and was a smart businessman, creating a thriving bakery business from scratch. I think he had a typical Teutonic personality: quiet, disciplined, serious, proud, strict with his children, and intelligent.

Grammie told me many times that Swiss men were very good looking while Swiss women were homely. Her words and not mine All You Swiss Women Who Are Now Taking Umbridge. “Krisily,” she would say, “when you are older, you should go to Switzerland to find a husband.” I actually didn’t make it to Switzerland for another 30-some years, and already had a husband, but judging from my grandpa, my dad, and my brother, she is right about Swiss men being handsome.

I’m sorry to say I didn’t talk to Gramps very much. He never wrapped his arms around me like Grammie did. Instead, he gave me a firm handshake when saying hello or goodbye. It’s where I learned to shake hands properly.

If you asked me the one person I would like to spend a couple hours with, be they dead or alive, I would probably have a different answer each time you asked, depending on my mood. But if you asked me today, I would tell you that it would be my Grandpa Gloor. He’s on my mind.

I would ask him how he met Grammie, and what was it about Lina Huntziger that caught his eye. Grammie said they lived in different villages in Switzerland and that Gramps had to walk over a steep hill to reach her village to court her. What made her worth that journey as a young man? Was it Lina’s zest for life? Was it the devilish twinkle in her eyes? Was she kind and funny and did she make you laugh?

Did Grammie make you crazy sometimes with her enthusiasm compared to your serenity? When she would give free bread and rolls to the homeless men during the depression, did it make you angry or were you secretly proud of her? Did you like her cooking? Did you like her family?

When you would play German polkas on your accordion in the afternoon, did the songs make you homesick or did they bring you comfort? Were you proud of your kids? Did it make you happy to teach my dad to bake?

I would ask Gramps why he made the decision to immigrate to America in 1925. Were you scared by the Great War, fearful that the fighting wasn’t over? Was the economy so very bad that you felt joining your brothers who had already immigrated to the US was the best decision for your family? Were you so sad to say goodbye to your family, knowing you might not see them again? Were you scared to move somewhere with an unfamiliar language and an entirely different culture? Why did you become a baker?

There are a million more questions I would ask him. A couple of hours probably wouldn’t be enough. Well, considering how quiet he was, maybe the time would be spent in silence, holding hands.

4 thoughts on “A Few More Hours”