I made my weekly visit to the grocery store yesterday. This time I only spent a little over $100, and that included three six-packs of petunias. No meat, though, which explains the bearable total cost. My freezer is pretty full of protein at this point.

I’m a terrible shopper. I dutifully make a list, and I dutifully purchase everything on the list. However, I also see things like jarred spaghetti sauce, and ask myself, “Do you have spaghetti sauce at home?” Thinking I might not, and thinking that these days one never knows what’s going to be on the shelves from one day to the next, I might (and, frankly, did) buy some. Two bottles, in fact. I got home only to learn that I had two of the same jars on my pantry shelf. I convinced myself I wasn’t a hoarder by reminding myself that the brand I like was on sale for $3 a bottle less, and I use it regularly. Therefore, not a hoarder. Just a savvy shopper. See the difference?

I will admit that I might be hoarding flour. I have a flour container full of flour and purchased another bag yesterday. The thing is, I use a lot of flour because I bake a lot. Not having flour would make me sad. Being sad would impact my mental health. My mental instability could make me more susceptible to viruses. So, not a hoarder after all. Just taking good care of myself.

One thing that has been absent from the grocery shelves since the quarantine began is yeast. I have looked at every kind of grocery store to no avail. Apparently when people were frantically buying their stash of 300 rolls of toilet paper, they were also grabbing packets of yeast as they headed back to paper products. They were all going to make bread from scratch, because there would be none on the shelves. It’s true that at the very beginning, store-bought bread was a difficult commodity to find. That’s why my brother spent 12 to 15 hours a day that first week or so going from Basha’s store to Basha’s store, baking bread to serve their customers. God bless him. Now, however, bread is plentiful, and people are looking forlornly at the multitude of packets of yeast that they wish they hadn’t purchased.

Here’s why: bread making is difficult. I know that Caroline Ingalls baked bread every day on Little House on the Prairie. But as much as I like to bake, and inasmuch as I am the daughter and the sister of fabulous bakers, still, successful bread making eludes me. And I bet it has eluded a lot of the yeast hoarders, who once again go to the grocery store and buy Oroweat whole wheat bread, because it’s so much easier.

A few years ago, I got a notion to make English muffins from scratch. I found a recipe, followed it perfectly, and did exactly what they said, down to browning both sides on my griddle. Unlike most of my bread, they turned out perfectly. And they tasted delicious…. 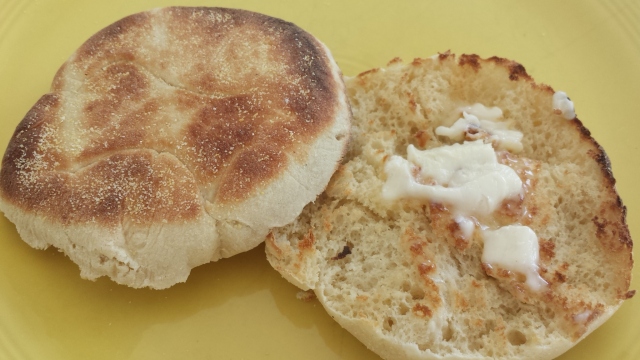 But nevertheless, I WANT SOME YEAST. I would like to make a homemade pizza, and making a crust requires yeast. I was so desperate that I went on Amazon yesterday to see if it was available. It was, if one is willing to pay $10 for a sleeve of three, plus shipping. I got so close, that it’s still sitting in my Amazon shopping cart. But yesterday, much to my delight — and for the first time since mid-March — there was yeast available. Of course, there was only one kind: Fleischman’s Pizza Crust Yeast. But that’s what I was seeking. Yay.

One thought on “That’s the Yeast of It”