Geocaching is one of my favorite activities with my grandkids. You will recall from earlier posts that geocaching is a virtual treasure hunt using a GPS system in which you are looking for tiny little containers that usually house nothing more than a piece of paper on which to sign your name.

The caches are generally located in fairly hard-to-find places, some that require, ahem, let’s say adventurous activities. Our geocaching quests have included Addie climbing along the side of a bridge over a creek (don’t tell her mom; I don’t think she knows about that one), walking through a tunnel that was owned by Denver Water (the bed upon which we walked was dry, and I prayed really hard the entire time that Denver Water wouldn’t decide to open up a valve and send water shooting through the tunnel while we were helplessly trudging through), and reaching under bushes or into holes that could (but didn’t) contain danger.

One such geocaching escapade in 2014 took Alastair and me into a well-populated park not far from our house. The description of the geocache fully disclosed that finding the cache would involve climbing a tree. Well, it certainly wasn’t going to be moi who would climb the tree. Alastair was 9 years old, an age at which climbing a tree seems fun. We located the tree, and before you could say Zacchaeus-the-tax-collector, Alastair proceeded to begin his journey up the tree, flip-flops and all….. 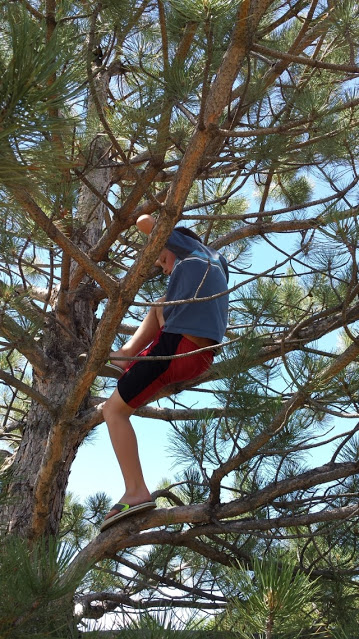 Zacchaeus, of course, was the evil tax collector from Jericho who was so excited to see Jesus speak to the crowds that he shimmied up the tree as fast as Alastair. His prize wasn’t a geocache. Instead, he not only earned the  chance to see Jesus in person despite his short stature, but he also received an invitation to join Jesus at dinner. This, of course, raised all sorts of Jewish eyebrows.  Jesus would rather eat with a sinner than someone as holy as us.

The thing is, Zacchaeus was as excited with his prize as Alastair was when he grabbed the geocache container that was hanging at the top of the tree. In fact, Zacchaeus was so excited that he immediately promised Jesus that he would pay back the money fourfold that he had collected under questionable means. Not only that, but he would give half his possessions to the poor.

I’m sure that Jesus was absolutely DELIGHTED that Zacchaeus not only had seen the evil of his ways, but was turning over a new leaf and instead of taking, would be giving from that point on. I, like Jesus, admire this man for turning greed into generosity, something I keep saying I’m going to do, yet somehow still look the other way at people holding signs.

But while I might have missed the point of the gospel story, I have to admit that I am equally impressed that this man could climb the tree so quickly, and apparently come down without breaking any important bones. Alastair made it up and down the tree pretty quickly too. But it would have been more difficult for Zacchaeus. After all, being a tax collector and all, he probably was older than 9, and he was likely wearing a long robe.

One thought on “A Tree Grows in Jericho”