My parents sold their bakery in Nebraska and moved to Leadville, Colorado, the summer of 1973. I was a freshman at the University of Nebraska, and didn’t go with them. At least not at that time.

Colorado was obviously different from Nebraska in many ways. But Leadville, Colorado, was like moving to a new country where you don’t know any of the customs or the language. It was a completely new ball of wax, so to speak. Nearly everyone who had a job worked at the molybdenum mine some 20 miles out of town. The citizens of Leadville weren’t wealthy. The mine paid decent wages — the best in town — but it didn’t produce millionaires, at least not for those who put on a hard hat and took the elevator down to the mines every day.

The workers were paid every other Friday. The miners brought their paychecks in to Safeway to be cashed. They bought their groceries for a two-week period using cash. They stopped at the various businesses to pay their bills, again in cash. Perhaps they put a bit in the bank. And then they spent the rest on more nefarious ventures. I’m generalizing, obviously, but that scenario was true for many Leadville residents.

The families in Leadville, many of whom were Hispanic, took the fall hunting season very seriously. They stored their freezers with the venison and/or game birds (using every edible part) that they had bagged, and fed their families out of the freezer for the next 12 months from their success.

The first time I came to visit my family in Leadville was during fall break in October 1973. Mom and Dad picked me up in Denver from the airport. As we headed up up up into the mountains and the air became thinner and thinner, traffic began to slow down. Pretty soon we were in a traffic jam that would rival any big-city mess. A trip that would generally have taken a couple of hours took nearly four hours.

“What on earth is causing this traffic backup?” I asked my parents. They pointed out that nearly every car had a dead animal or two tied to the top. It was hunting season in the mountains, and it was an eye-opening experience for me.

My dad had never been a hunter. In fact, he really didn’t care about guns. I think he owned a shotgun and I know he hunted a time or two for pheasant, but it was just to humor my Uncle Ray, who enjoyed the sport. Dad might have even taken my brother Dave hunting once or twice, but Dave’s appetite for guns was about like my dad’s. The bug didn’t bite him either.

I was thinking about hunting season because Bill and I drove from Denver to our AZ home last week. We stopped in Raton, New Mexico, because this traveler had the Big Time Theory that as long as we were on the other side of Raton Pass, the snow wouldn’t be a problem. As it happened, we drove the next day in a blowing snowstorm. Oh well. That’s why I’m not a meteorologist. That, plus I don’t own any cocktail dresses.

Anyhoo, we had dinner that night at a steakhouse in this New Mexico town that is a few miles from the New Mexico/Colorado border and called home by some 6,000 people. I couldn’t help but notice that the restaurant was filled with mostly men, and what’s more, every single man was wearing a hunting cap of some sort. Which, I might add, they didn’t feel the need to remove despite the fact that they were in a restaurant.

And I thought to myself that they, too, would fill their freezers with deer and/or elk meat just as the hunters from Leadville. In fact, they might have been having the last beef steak they would enjoy for some time.

I also hoped that they enjoyed the blue Jello that was featured as part of the salad bar….. 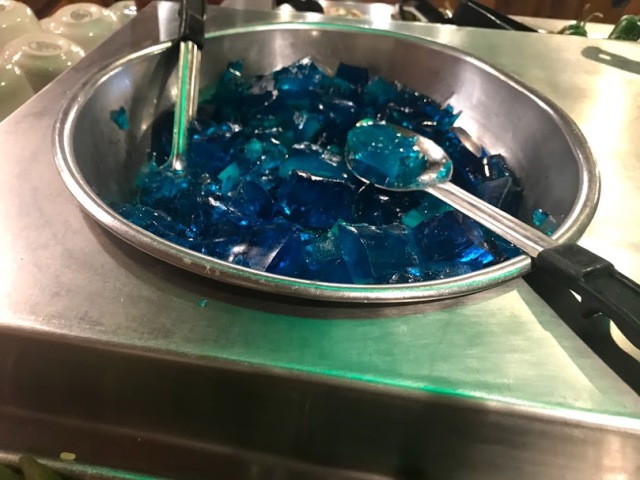 A just reward for bagging an elk.

One thought on “A-Hunting We Will Go”