It all started with a tall bouquet of fresh dill at the farm store. A beautiful, fragrant bouquet of dill. A big bouquet that told me there would be pickling cucumbers somewhere nearby.

Sure enough, just on the other side of the counter were stacks and stacks of pickling cucumbers, small and lumpy and ugly,  but perfect for making pickles. I bought three or four pounds of cucumbers and took them home to make and can some dill pickles.

My annual canning day is something to which I look forward every year. I used to can tomatoes and jelly and peaches and dilly beans as well as cucumber pickles, but I’m not quite the woman I used to be (in so many ways).

To illustrate my diminishing capacities, though it was the dill that set me down the pickling path, I went home without buying dill. I went back a few days later and bought the bunch of dill about which I waxed so eloquently above. It was so big, I could scarcely fit it in the back of my Yellow Bug. My car smelled like dill for two full days.

When I got home, I put it in a vase to stay fresh. It was so tall that it wouldn’t fit on my counter without hitting the ceiling. I made it work by chopping off the bottom quarter…..

Pickling Day arrived. I washed out all the glass jars I could scrounge up and found some unused bands and lids. I cut up my cukes into spears and put them in the clean jars along with the vinegar brine, the garlic, the mustard seeds, and some of the fresh dill. Alas, I had purchased only enough cucumbers for six pints of pickles, and the dill looked as big and full as ever!….. 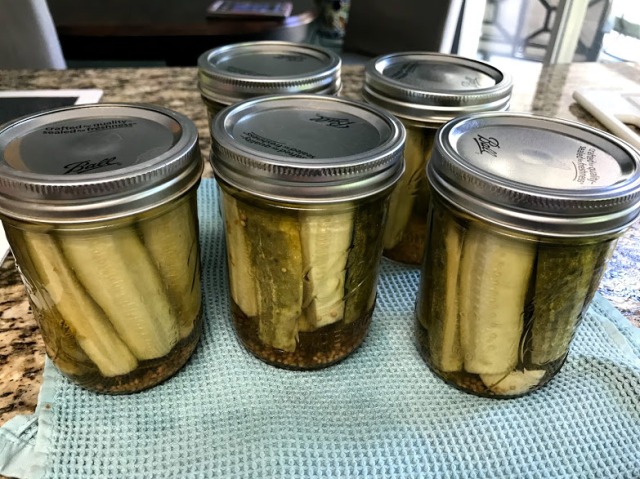 I looked at the dill for a full day before deciding that I couldn’t throw it away. It was too beautiful. So I trekked back to the farm store and bought some more cukes, having decided to make more dill pickle, this time slices. Of course, I didn’t have any more jars, not even in the basement where I can usually find a few dusty masons. So I went to the grocery store and bought a case of canning jars.

Still, the dill bouquet continued to look virtually unused. I tried to talk myself into just tossing what was left, but it was so pretty.

I decided to venture into new territory and make dill pickle relish. This involved chopping. Lots of chopping. If I was a normal person, I would have used my food processor. But I wanted relish that was cut into larger chunks and cramped my hands from chopping….

I filled six jars and processed them in the water bath. Afterwards, I still had eight cucumbers left, six half pint jars, and, yes, dill. I gritted my teeth, chopped up the remaining cucumbers, and finished my day by making sweet pickle relish.

And it all started because of a tall bouquet of fresh dill from the farm store. The dill cost me $3.99. The cucumbers, jars, spices, and time commitment cost me much more.

7 thoughts on “A Pickle a Day”